My mom had Alzheimer's.  It's a relentlessly cruel disease.  I watched it strip her of every joy in life, make her loved ones become strangers and her home environment become a constant danger to her.

I knew the disease was "shrinking" her brain and the damaged areas were lost forever.  All the doctors and all the material I read told me this was a fact.  Autopsies of deceased Alzheimer's patients confirm these facts.  I don't dispute these medical studies.

What I do have is an experience that I present as another fact.

I spent my mom's last Christmas day with her at the nursing home.  Mom was always happy to see me, but it was clear she did not know my name or my relationship to her.  I was simply someone she liked.  She paced the halls of the nursing home day and night and whistled continuously.  When she was tired of a visit she whistled louder to drown out my conversation.  This visit started out the same.  I followed her around and around the halls and chatted away about her grandchildren.  As we approached the lobby, Mom suddenly decided to sit down for a bit.  That was a rare and welcome event and I was delighted to take a breather on walking and talking.  Mom reached out and took my hand. Although she had been unable to say a simple sentence for close to a year, she said, "I have loved, and yet, I am alone.".  Tears sprang to my eyes and I tried to comfort her. She shushed me and continued, "And you have loved and you are alone.".  Now the tears were flowing.  My mom was back and she was comforting me!  She continued to converse, normally, for a couple of hours and then became very tired and wanted to sleep.

Over the next few weeks she was able to recognize and talk to several family members.  During those weeks she became physically ill and was discovered to be in the late stages of pancreatic cancer.  Twenty-two days later, she passed away.

I'm telling you this story because I believe that my mom's brain was not completely damaged beyond hope.  Otherwise, how could she have regained the skills of speech, understanding and recognition that Christmas day?

I picked up this book. ~ 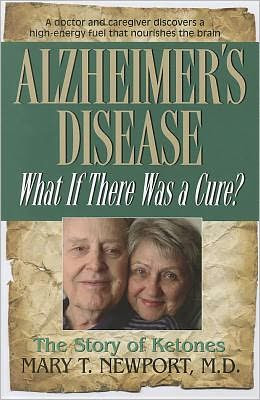 When Dr. Mary T. Newport's husband was losing a seven year battle with Alzheimer's, she tried to get him into clinical trials.  Tests showed him to be ineligible as his condition was verging on severe.  Her research led her to believe she could raise his level of functioning with simple dietary changes and he might score high enough to enter one of the trials.  This is her account of  the shocking improvement he experienced and her plea for more study into this form of therapy.

Snopes will tell you that this work does not fulfill the requirements of a scientific study and that is true.  It is the observations of a loving wife, with a scientific background in neonatology.  It is her story of research and everyday application of findings, right down to recipes.  It is a remarkable account of a man regaining skills and his personality.

I am not an authority on Alzheimer's disease.  I'm an at risk daughter of a mother, that lost ten years of her life to a disease that is expected to hit epidemic proportions as the boomers age.  I'm someone who knows the toll, physically and emotionally, that the caregivers suffer.  I have friends that are watching their loved ones slip away more everyday and I will lose friends to this disease.

If this book had been published before my mom passed away, I would have used Dr. Newport's information to give us a fighting chance.  I wanted to let you know the book exists, so you can make the decision on it's validity yourself.

I am forever grateful for that short time my mom was returned to me.  But oh, I might have had so much more!