Keeping Up With Cat Damage

Every once in a while my darling, rescued, feral cats upset me.

I know it's hard to believe these sweeties could ever do anything wrong. ~ 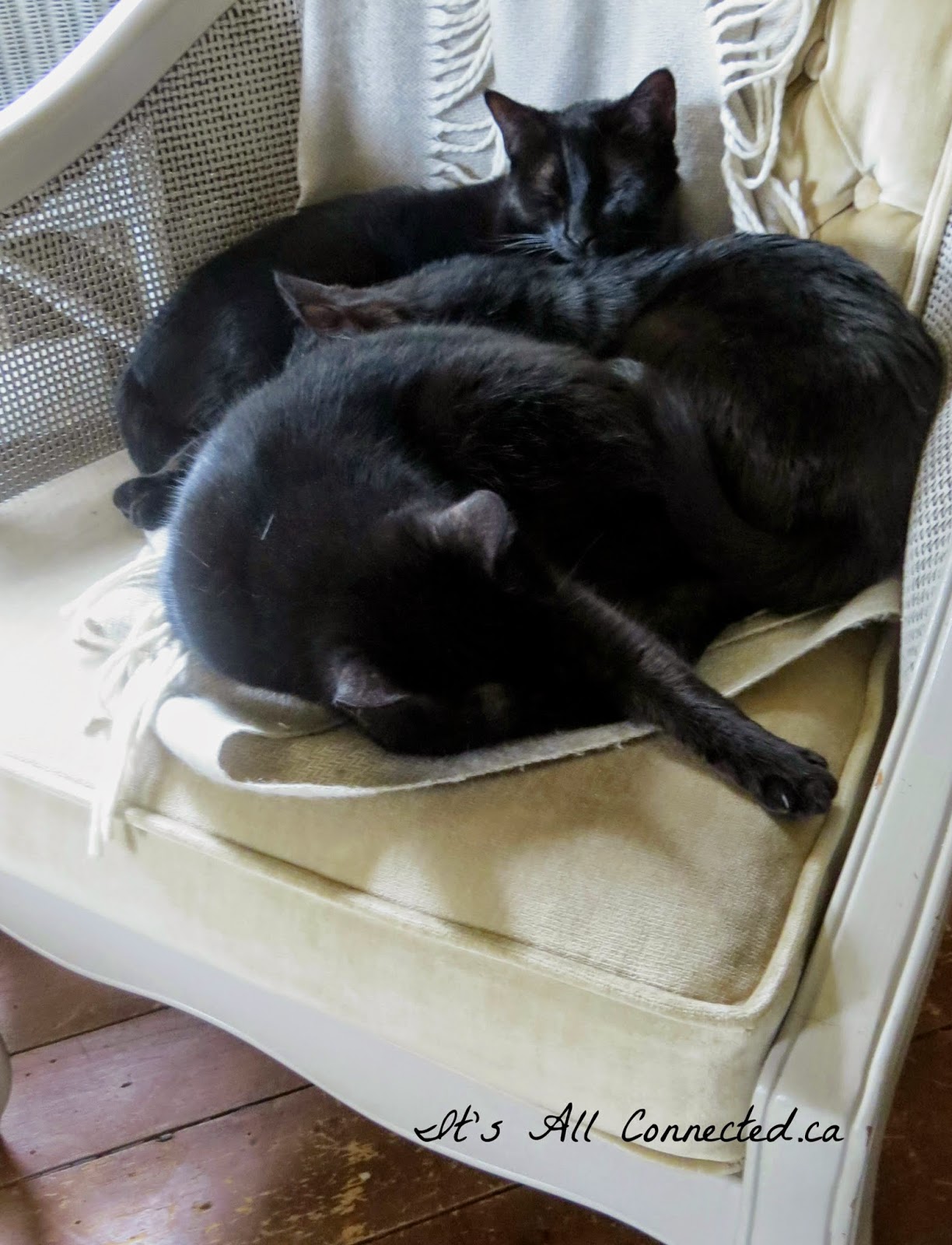 I accept the fact that they have been left alone more than usual since I've been working a lot the last couple of months.

They probably just got bored with peeling the paint off the walls. ~ 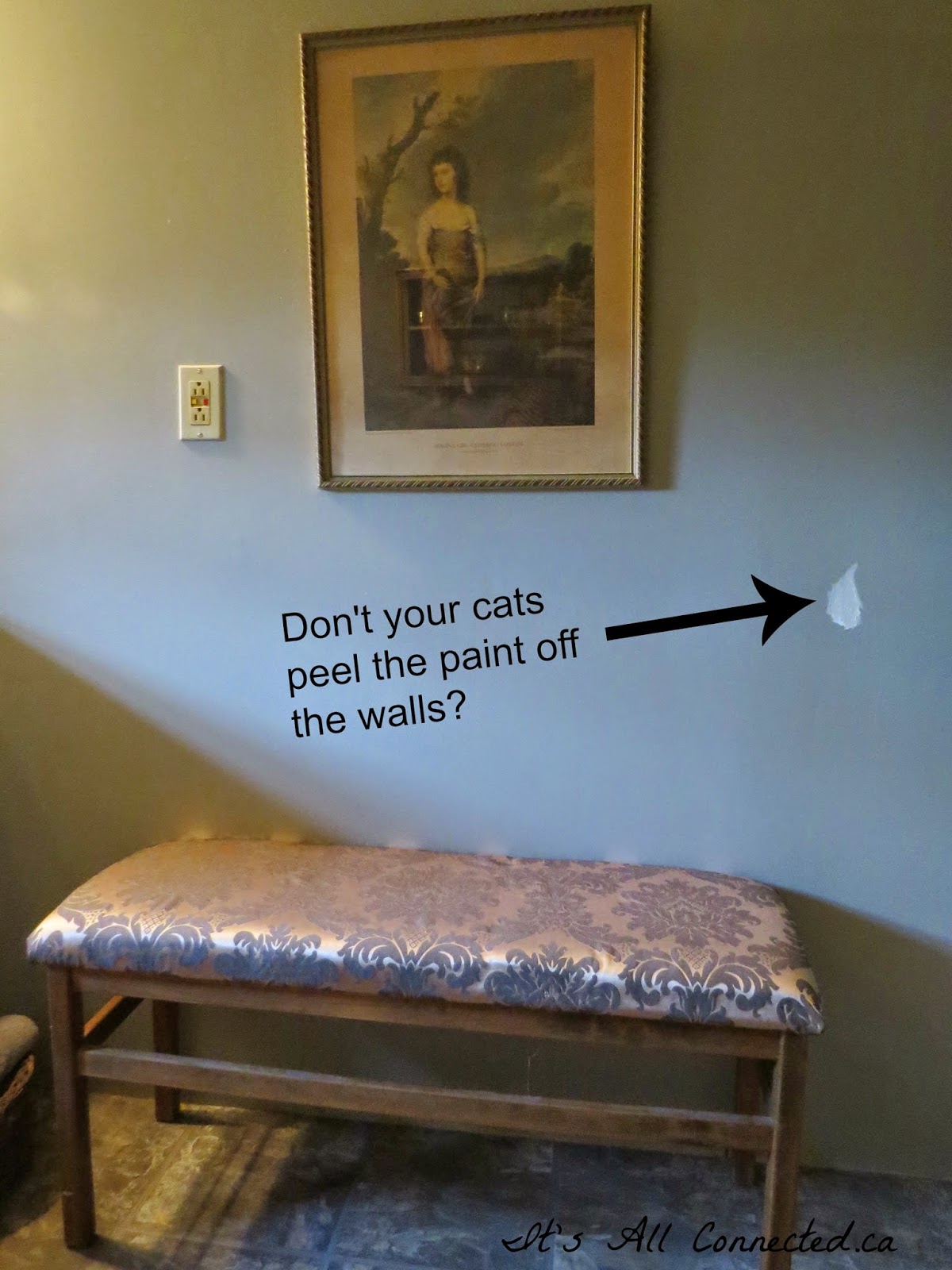 But, I was really upset when they destroyed a bench in the main bathroom.  I loved that bench in all it's tufted, Frenchy, dusty blue glory!  Trying to salvage it was just upsetting me all the more.

So, when I found a simple bench in the Salvation Army Thrift Store for $3, I decided to get over it and move on with something new.

I had some fabric left over from the Roman shade and the incredibly ugly former upholstery was gone in a flash. A staple gun and 20 mins. was all this quick fix took. ~ 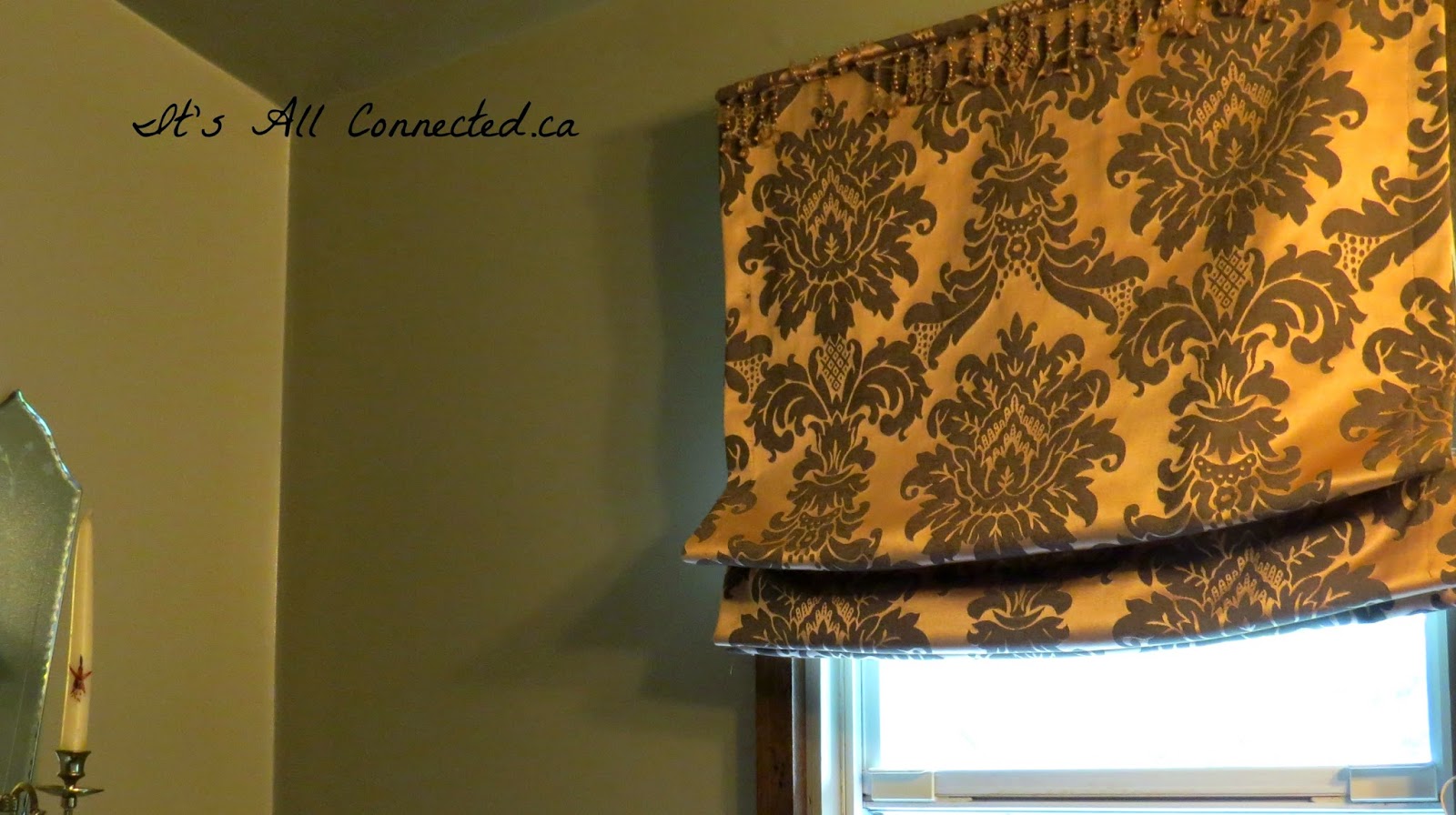 It's not all curvy, Frenchy but $3 to get over some cat angst is worth it to me.

Don't even think about going near that bench Clara Jane! ~ 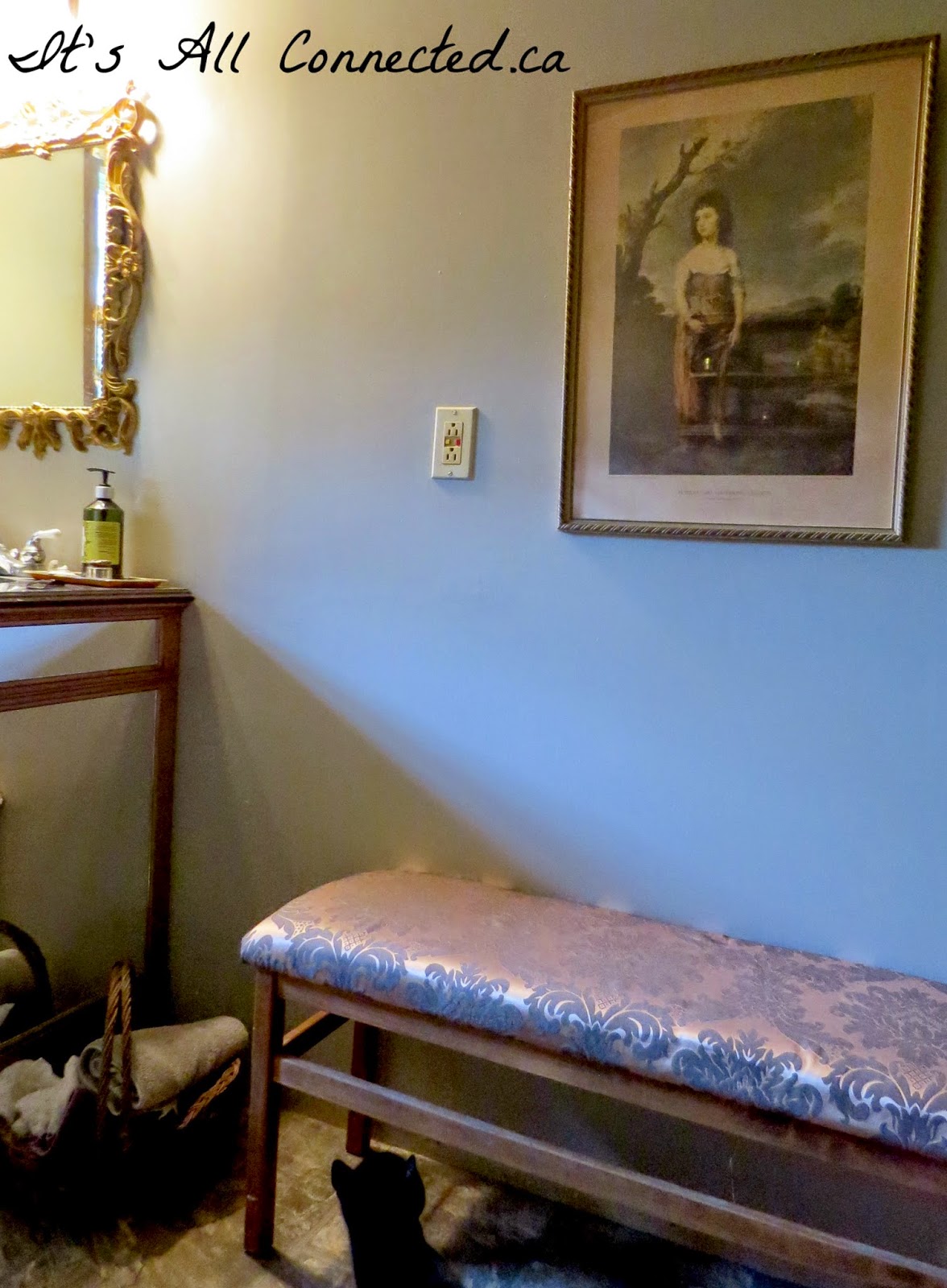 When I get another day off work, I'll darken up the wood with some stain.  I may even paint the spot where they peeled the paint off the wall.

In the meantime, get a quick look before they do something to this one. ~ 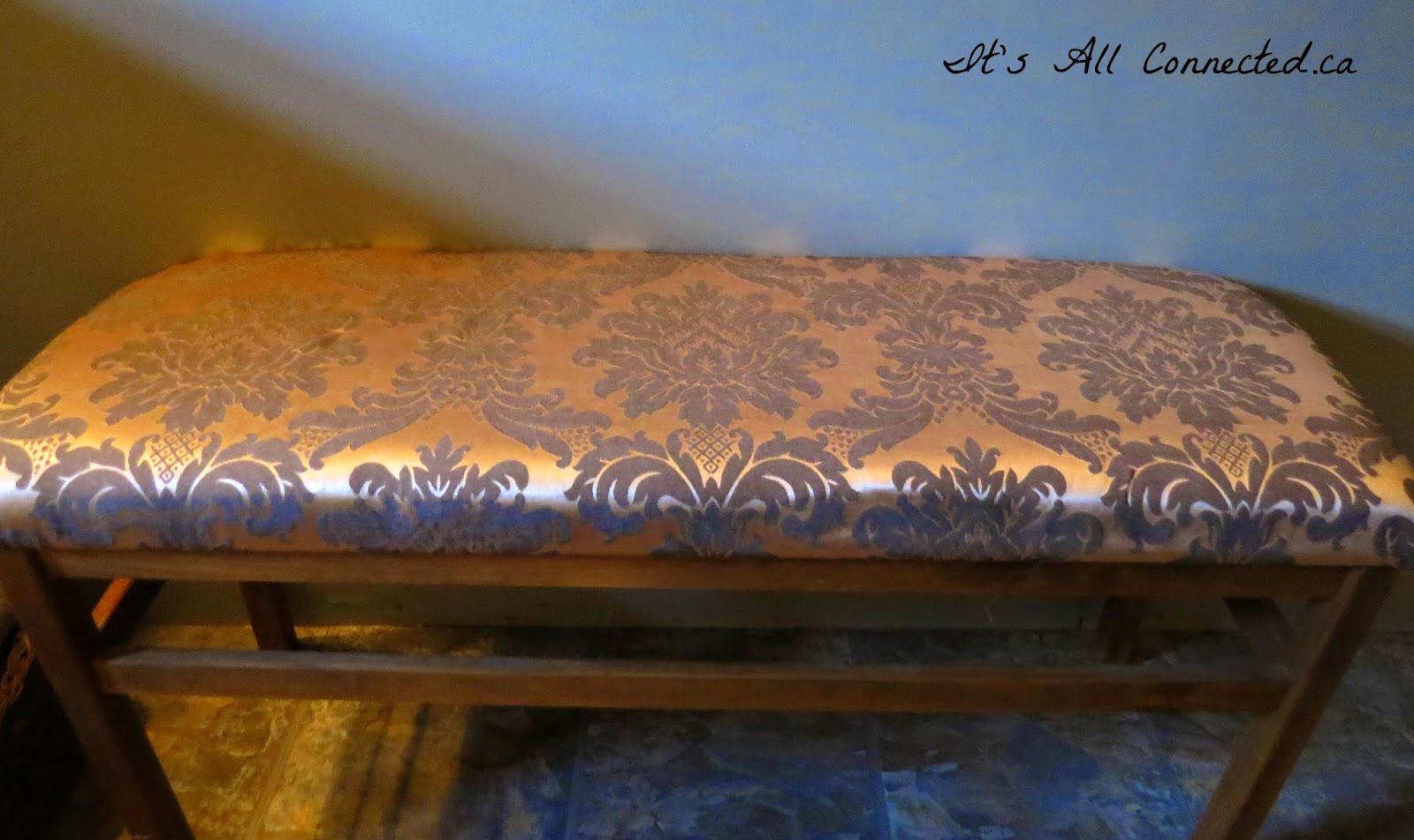 When you are into rescuing animals, it's best to develop a Zen attitude toward personal possessions.
.
I may have to frame this quote from Socrates:


Those who want the fewest things
are nearest to the gods.

Now that the bench is taken care of, I'd better get over to the neighbour with a dozen eggs to pacify her for what the chickens have done.  That's another whole story!
Posted by Maureen Wyatt at 00:33 No comments:

A Problem With Flying Monkeys

It was a shocking discovery to find the Flying Monkeys from The Wizard Of Oz were hanging around my house.  Wherever they go, no good will follow!

The first fall decoration I added to my front porch was a scarecrow.  I perched her on a bail of straw and a few hours later came out to find this! ~ 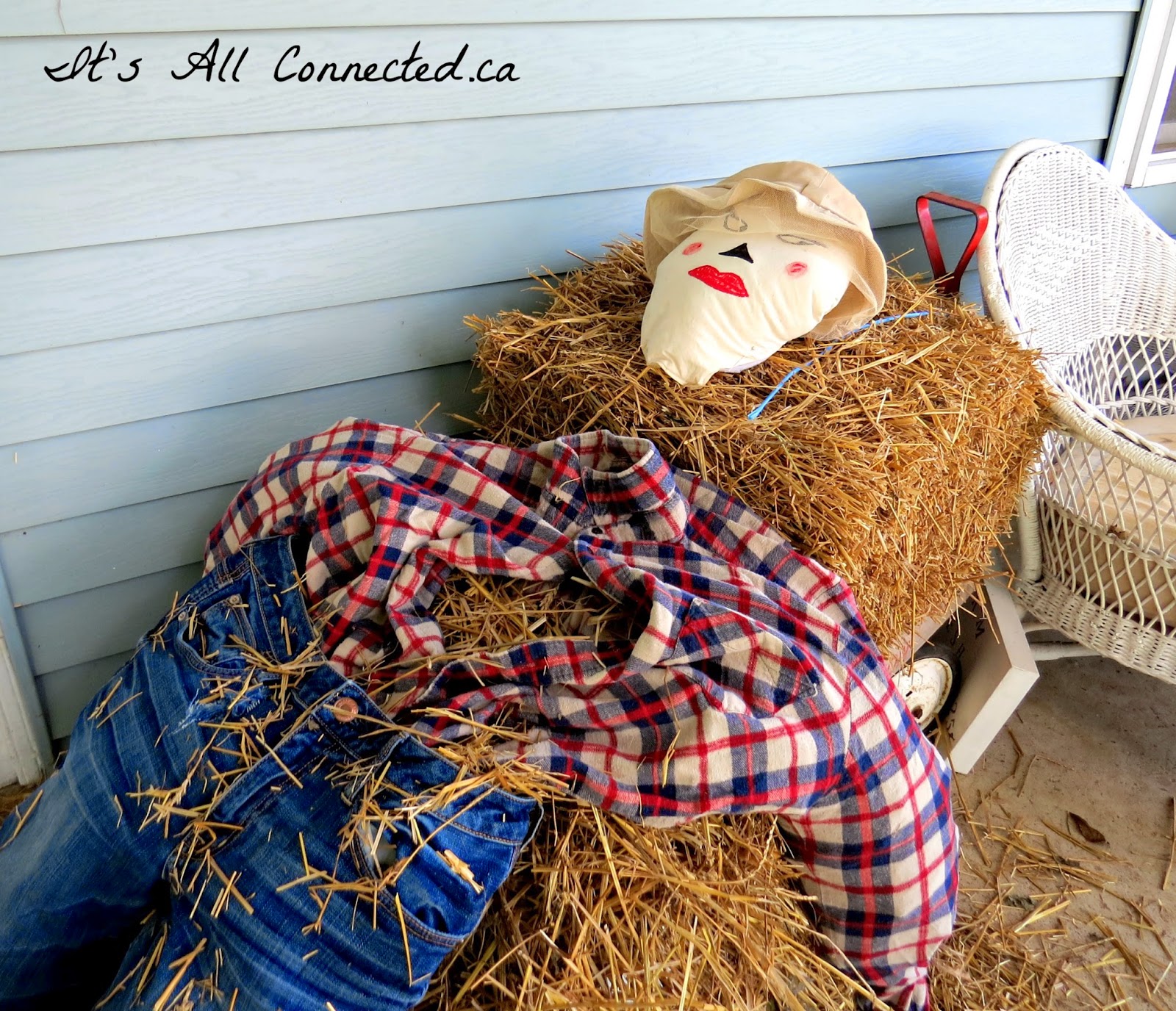 My poor straw lady. I felt so bad for her.  All her body parts where no longer in the right places. How well I know, from personal experience, the trauma that causes!

I knew right away who the culprits would be. Haven't we all seen what they did to the straw man? ~ 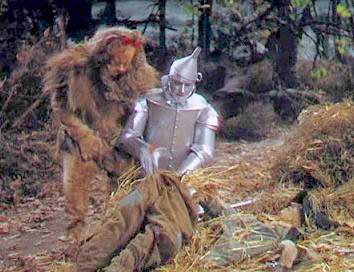 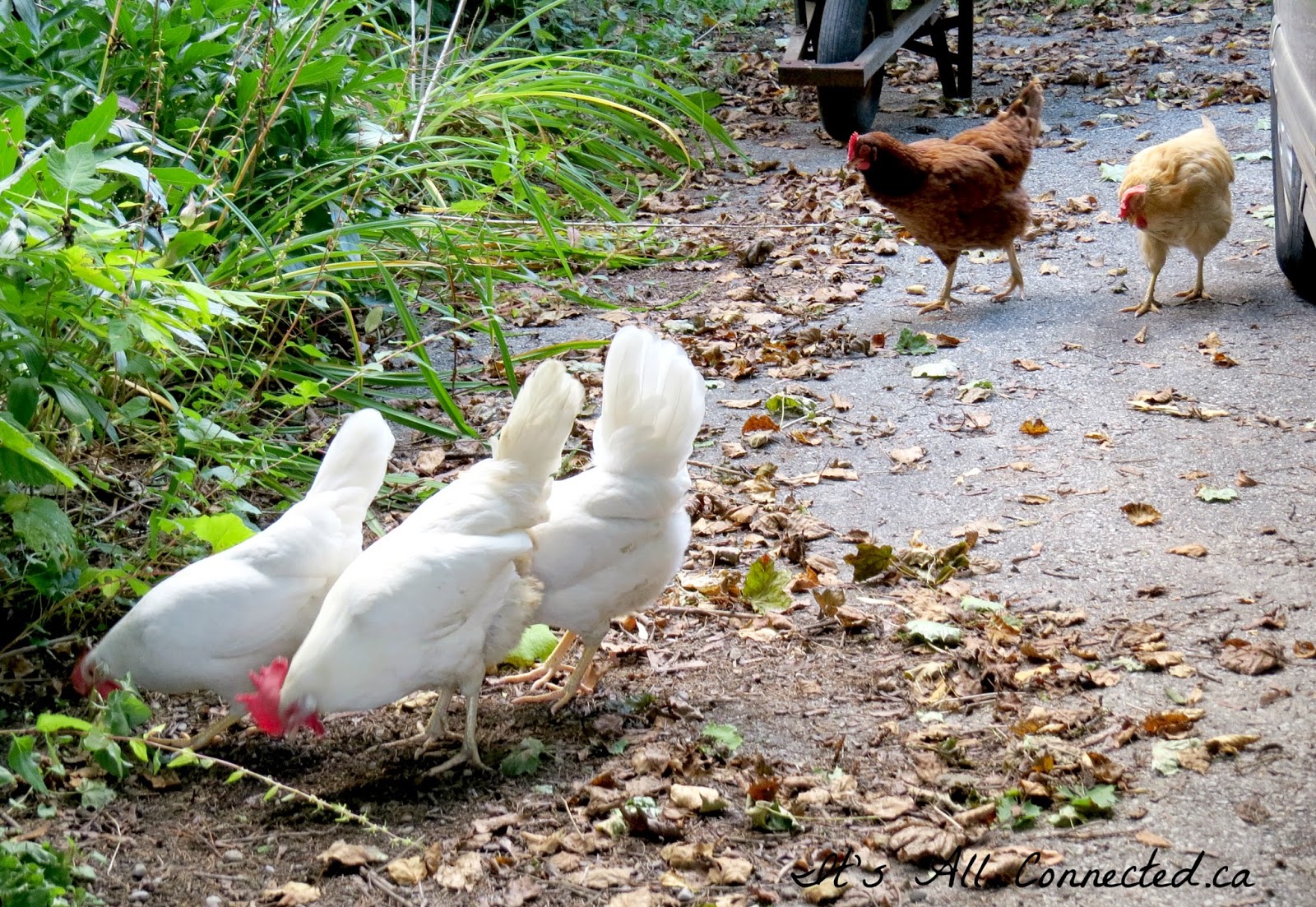 Maybe I don't have a flying monkey problem after all.

Straw lady thinks I have a definite chicken problem. ~ 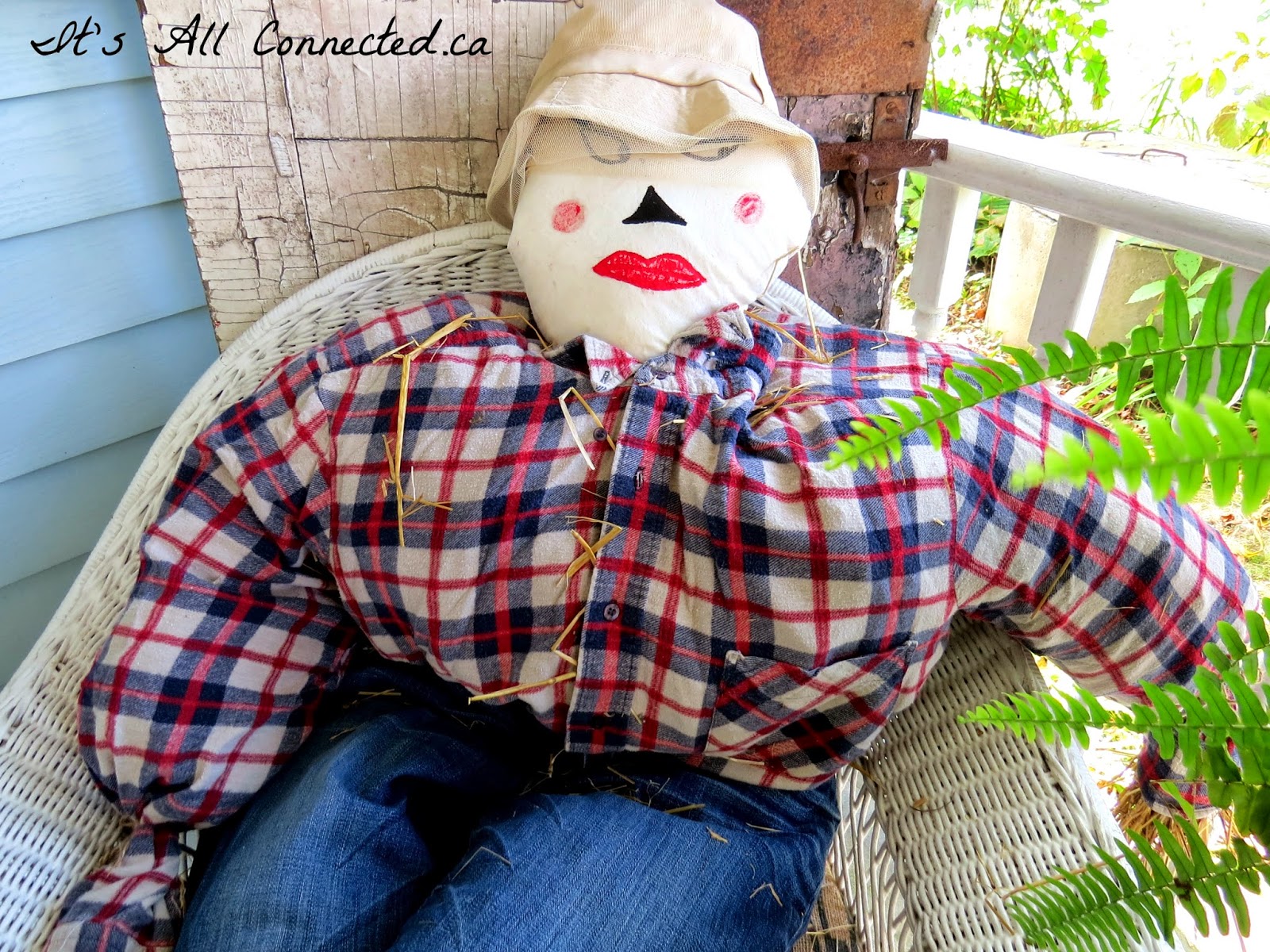 She's got herself pulled together and is keeping a good lookout over her shoulder for whatever it is that rearranges female body parts.

In fact, she has the same look on her face that I have on mine!
Posted by Maureen Wyatt at 23:17 No comments:

Would You Give Away Gold To Inspire Someone?

What would any of us be willing to give if we knew it would inspire others to rise above adversity or put past mistakes behind them and strive to be the best they could be?

Like all teenage horse loving riders, my daughter dreamed of making it to the National, a premier Canadian equestrian event.  Life went in a very different direction for her but she never lost her interest in the sport and was delighted to be able to attend the National at Spring Meadows, in Calgary, last weekend.

It was an unexpected and special treat to get to meet Eric Lamaze, a rider who's accomplishments and personal story have been an inspiration to her and her family. ~ 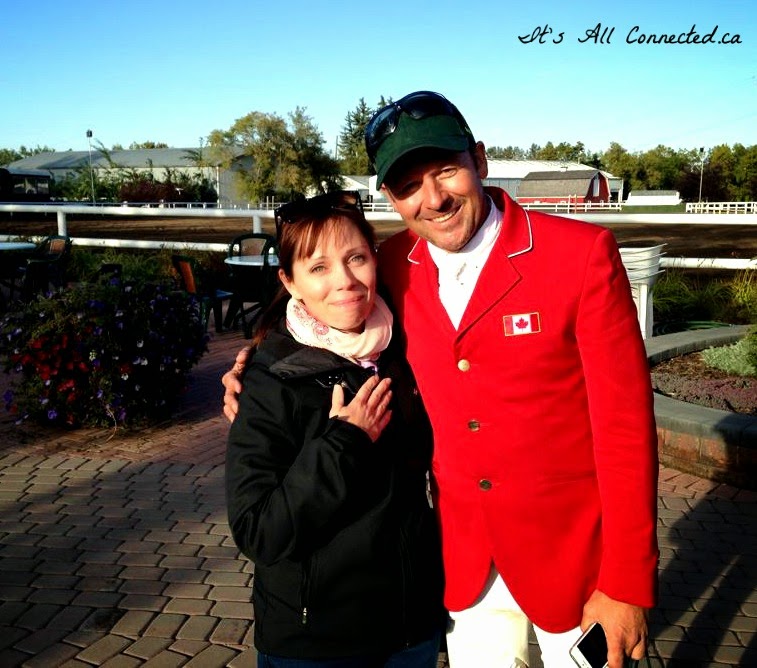 Eric had risen above a childhood in a troubled home and worked his way up in a sport that is usually only accessible to those privileged enough be able to afford participating.  It's not for nothing that horses are considered the 'sport of kings'.  He made his way to the Canadian National Equestrian Team and was making a name for himself as a great competitor.  But, he made mistakes.  Serious mistakes and it seemed his career was over.  A great many people must have believed in Eric, though, and he was given a second and even a third chance to redeem himself.  He did that by going on to win Canada's first Olympic gold medal in equestrian.  He is somewhat of a poster boy for never giving up, never giving in and everyone deserving a chance to try again.

My daughter was so happy she had the opportunity to tell him that he has been an inspiration to her children, several of whom have come from similarly difficult backgrounds or have physical disabilities. She told him that his personal and athletic achievements have meant a great deal to their whole family.

He turned to leave, after they had chatted and had the photo taken, and turned back to say he had something he wanted to give her.  How wonderful to have a key chain or some kind of souvenir from Eric Lamaze on the day he had won another gold medal!

The quiet spoken, press shy man handed her the gold medal he had just won! ~ 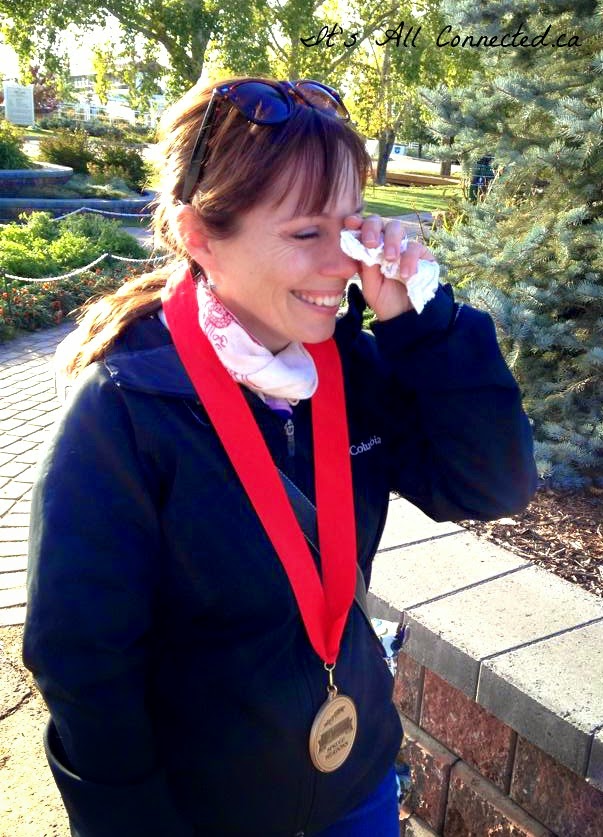 He would give up his gold to inspire some kids to become everything they dreamed of being!  He would give it up as a daily reminder that your circumstances are not what determines who you become in life.

Back home at the farm, the medal was proudly worn by a rescued horse aptly named Never Lose Hope. Just because she's not pretty, it doesn't mean Hope doesn't have the heart of a winner! ~ 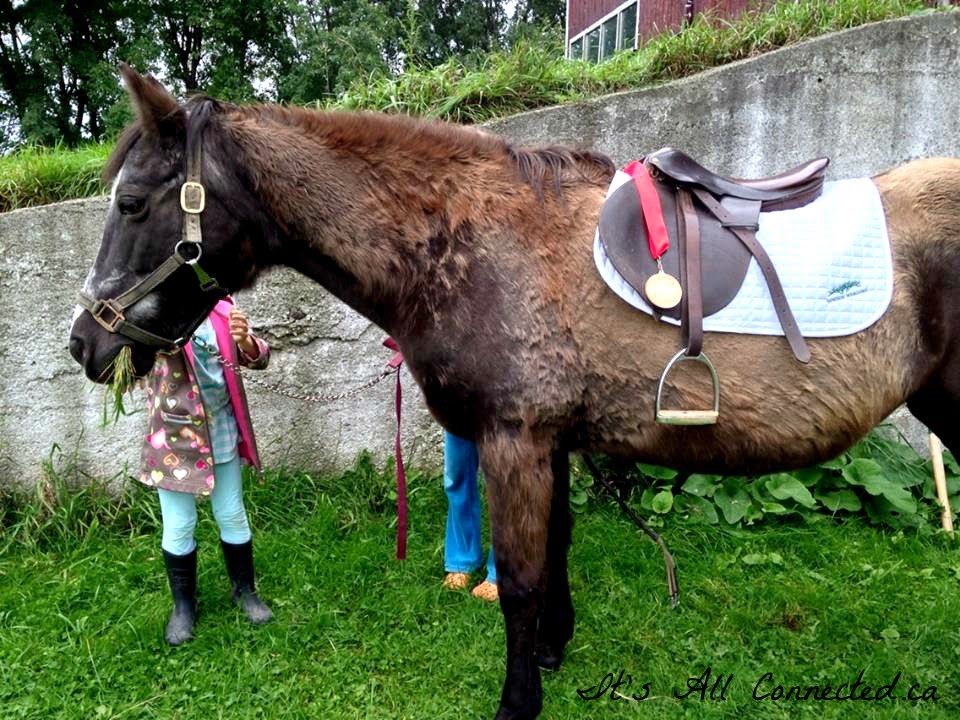 My daughter found that dreams do come true.  Not always when or in the way we expect, but they do come true.  You can devote your life to rescuing abused and abandoned animals.  You can spend your days caring for children that might not have had a chance in the world without you.  You can put aside your own wishes in the service of others and still come home from the National with the gold medal! 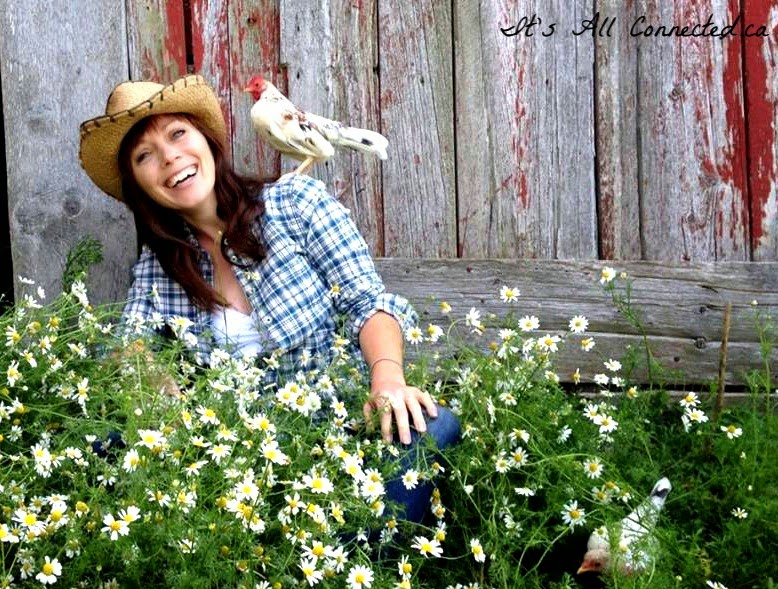 Thank you Eric Lamaze for your selfless act of kindness!  Thank you for showing us all that where we are today is not where we must stay, as long as we have the courage to point our faces in the right direction and take that first jump!
Posted by Maureen Wyatt at 21:37 No comments:

I have had to admit I have a bad case of animal rescue burnout.  Of the three old chickens I took in last month, only Vivian is still with me. 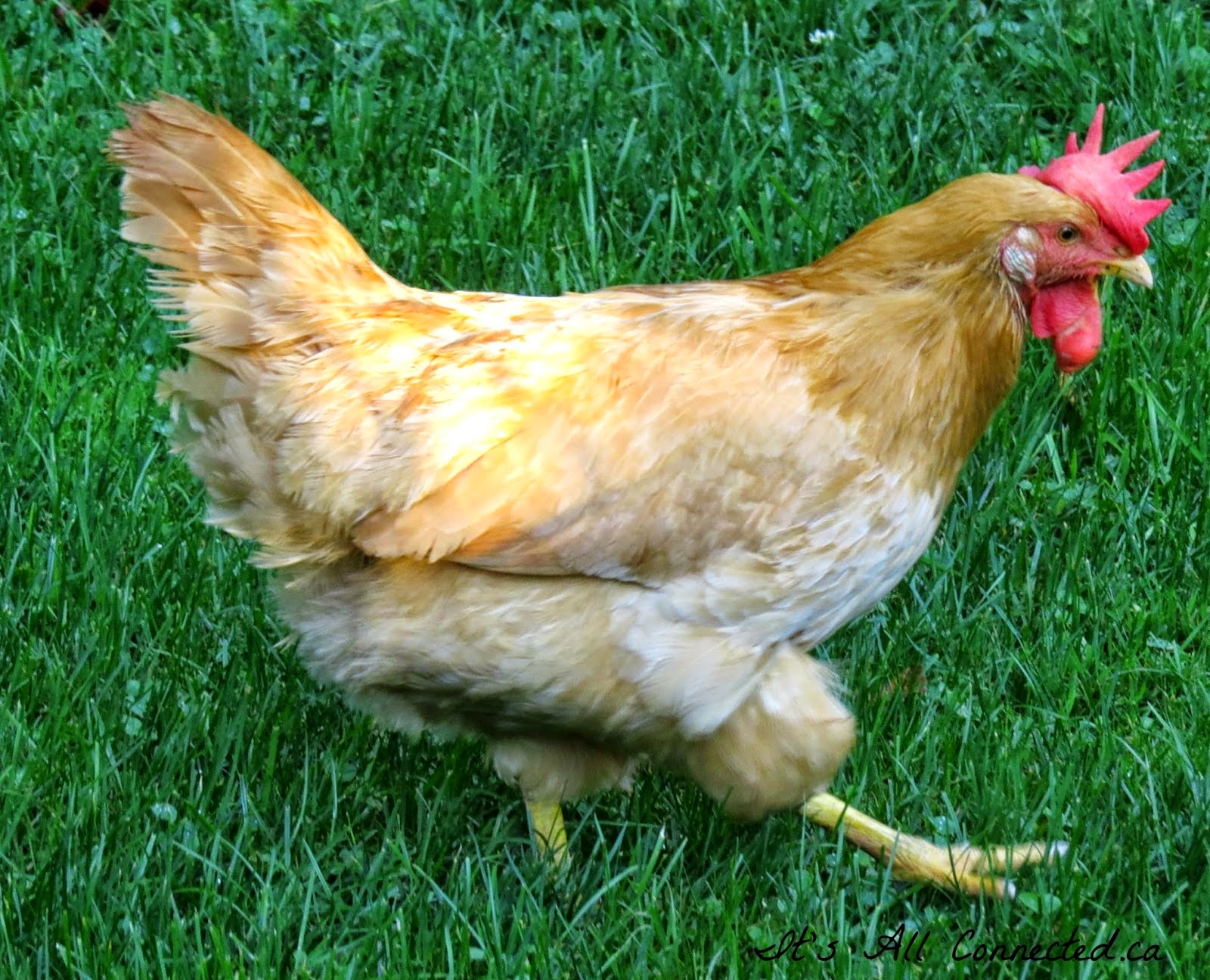 A week ago Camryn died and Josie followed her this weekend.

I work very hard at healing these chickens and spent countless hours taming them and making them happy in their new world.  They respond so well to fresh air, nutrient rich food and, most of all, individual attention that it is truly heartwarming.

But, the down side is that I get attached to them as pets and it's wearing me out with sadness and worrying over them.  Losing Josie and Camryn leaves me with too few chickens to keep the coop warm over a Canadian winter.  I need at least four chickens in there so their body heat adds to what the heat lamp does to keep them from frostbite.  I had to make a decision quickly on what to bring into the coop, so I can get them integrated into the flock before cold weather sets in.

I'd also like to get a reasonable number of eggs for the money I spent on feeding and housing the ladies. Of the three gals I have left, only Kay lays eggs.  The other two are more in the decorative end of chicken farming.  sigh

So, today I picked up three, white leghorn pullets.  Yup, I have brand, spanking, new lay hens from a reputable breeder!  They are about 4 mths. old and have just come into laying.

They were a bit traumatized from the move, so I just snapped a quick shot of a couple of them in the quarantine coop. ~ 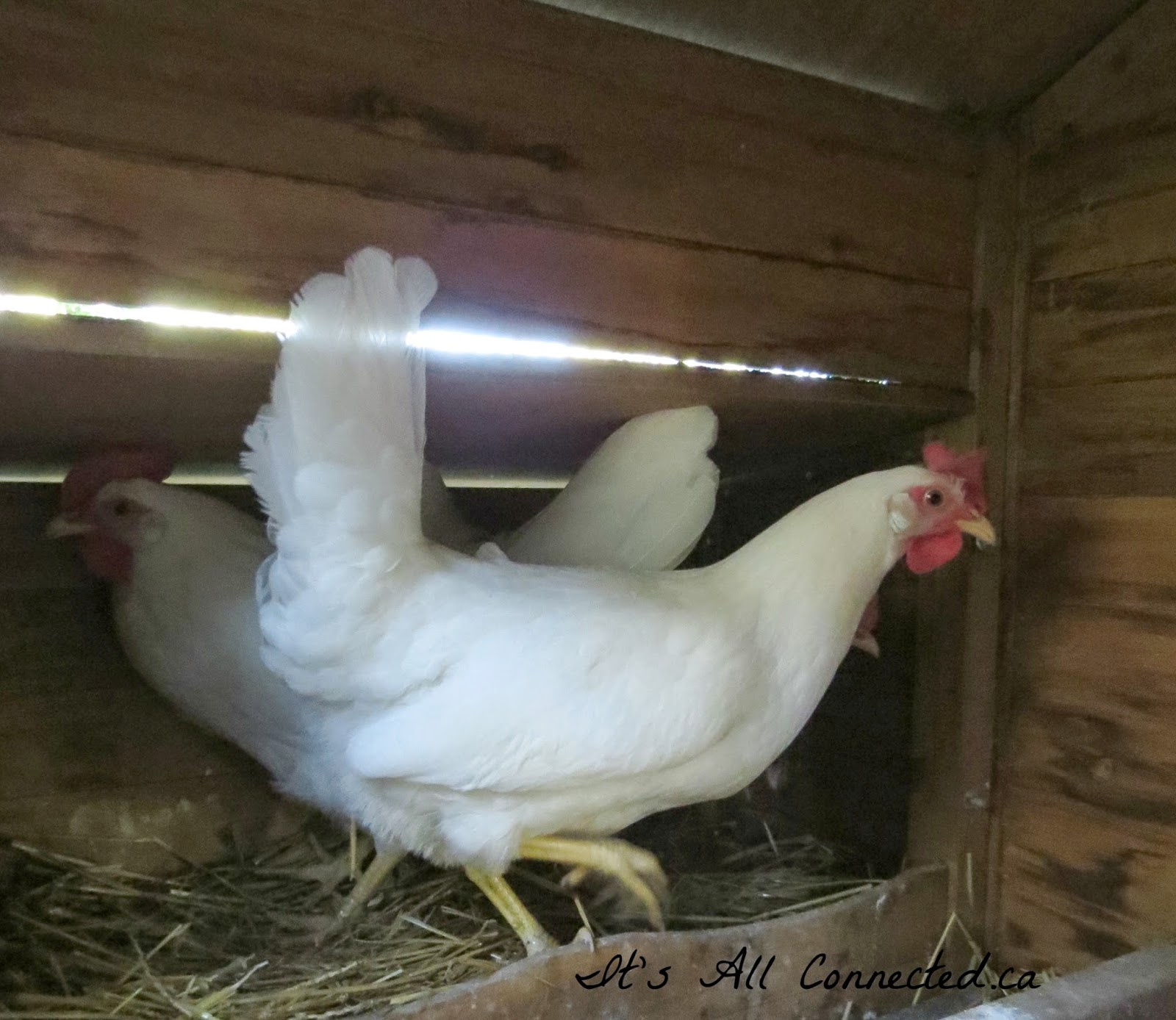 It feels positively lazy to not have to treat any wounds, overgrown nails or lice on these gals!  All I had to do was feed them, water them and say, "Good night, girls".

Oh, and I did have to apologize to them for making their move more difficult than necessary.  I told the farmer I would help him catch them, since I'm an excellent chicken catcher.  He declined my help and brought me the three stuffed in a feed bag.  Of course, I wouldn't subject them to a car journey in that! Just as I took the third chicken out of the bag to put in my cat carrier, the first two made a break for freedom.  The farmer had to catch them all over again and I'm sure he complained aplenty about me to his wife when he got back to the house!

Queen of the coop, Kay, hardly bothered to kick up a fuss to establish herself as boss this time. As long as they don't touch her supper food, she doesn't seem to care about the youngsters being there. ~ 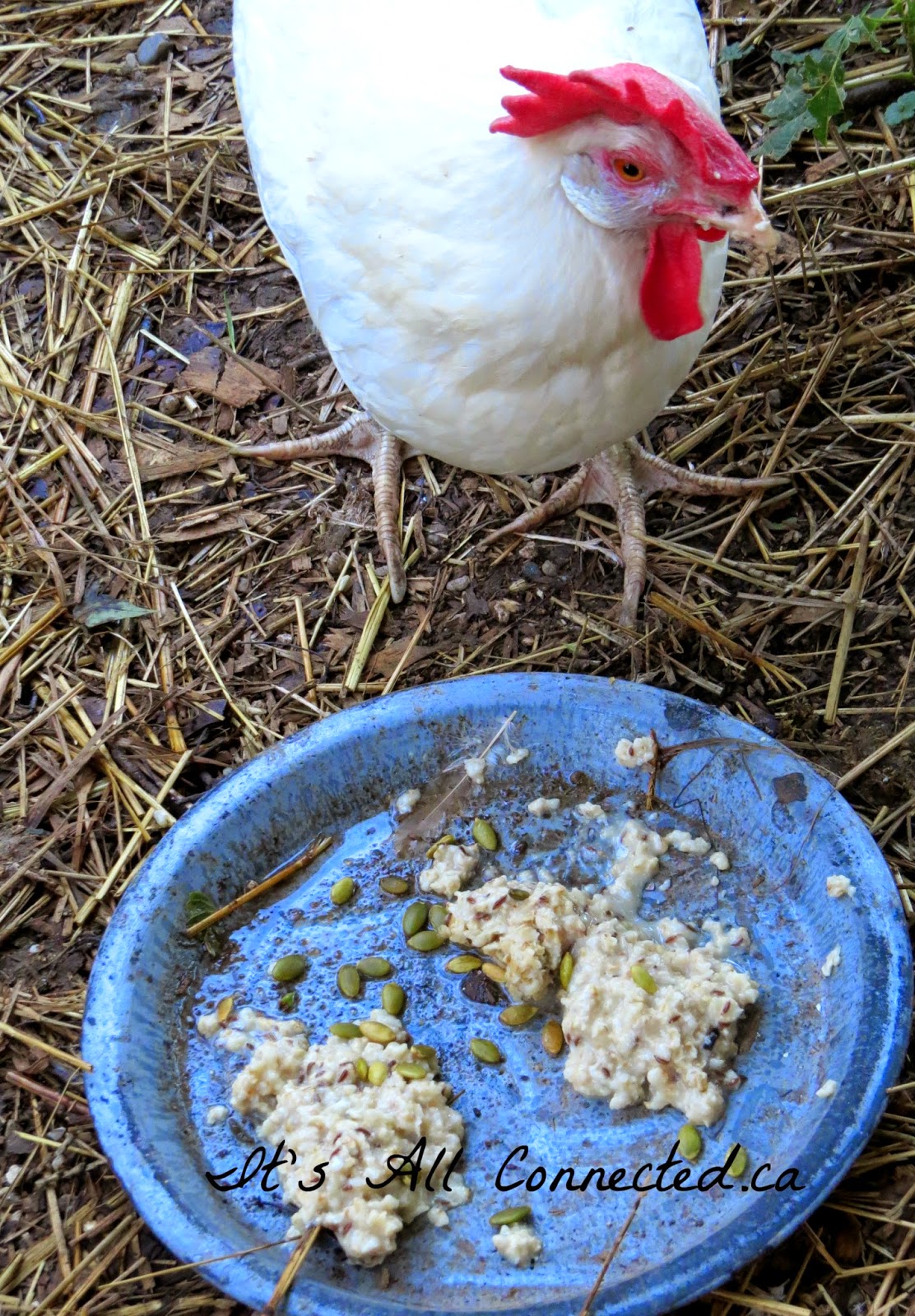 Maybe she's just relieved that all the responsibility for supplying my breakfast won't fall on her shoulders any more.

I know I will take in more rescues in time.  For now, it feels wonderful to have nothing but happiness in the coop!


ps - One of these girls will be named Rukmini and one will be Elizabeth to fulfill friend requests. Any ideas on a name for the third girl?

Posted by Maureen Wyatt at 00:41 No comments:

The last weekend of the summer has come and gone.  As if to compensate us for a cold and rainy summer, the weather was beautiful.  My nephew and his family came to make the most of it and spent as much time as they could on the river.

I was particularly glad for the heat when my daughter and grandkids nominated me for the ALS Ice Bucket Challenge.  Just when I thought I was nicely ducking out of that one!

Kay volunteered to do the challenge with me.  We thought we could support a good cause and bring attention to the plight of factory farmed chickens at the same time.  I'd say 'kill two birds with one stone', but Kay takes exception to the phrase.

I gave a little blurb on the video about Kay having first hand experience of suffering and her willingness to do this to raise money for the cause should make us more willing to pay a little more for cage free eggs. 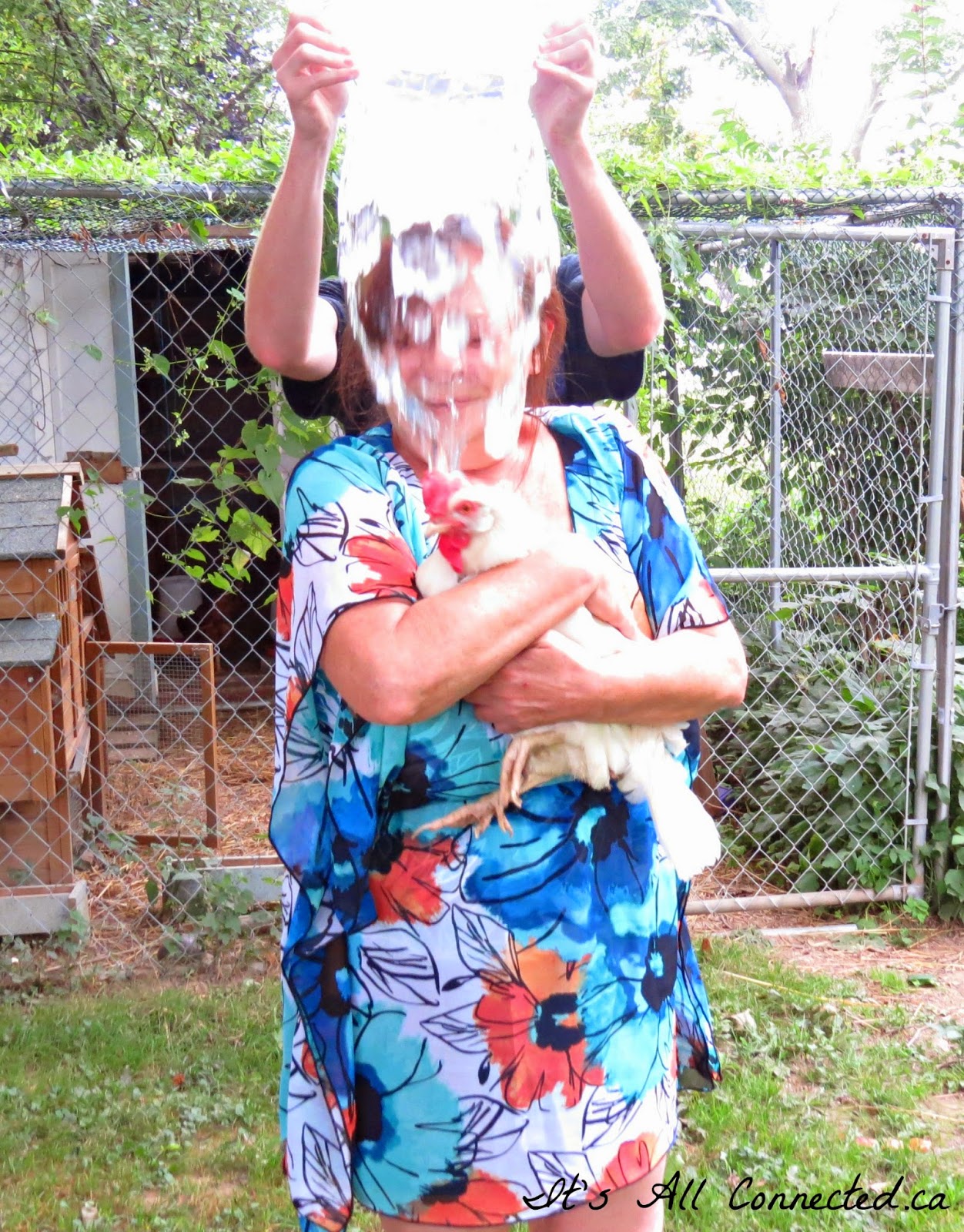 I'm not sure Kay understood what she was letting herself in for. Even though I shielded her from the worst of it, she was one mad chicken!

DO NOT leave this challenge up to teenagers to execute. They will make sure the water is as cold and plentiful as possible! ~ 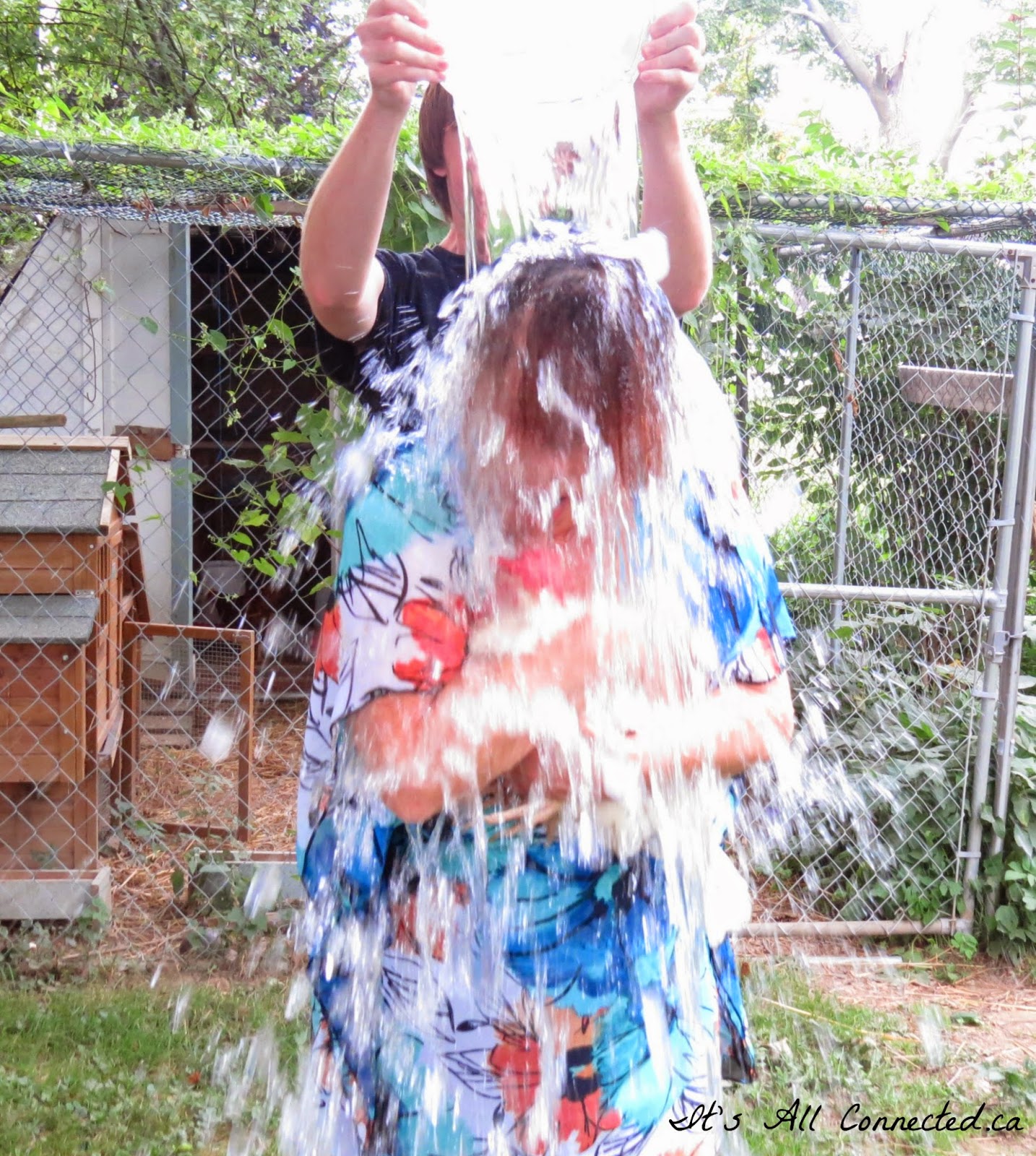 Luckily, Kay loves me and came right back for treats. But, the new girls were having none of that treatment.

Josie was looking for anything to hide behind ~ 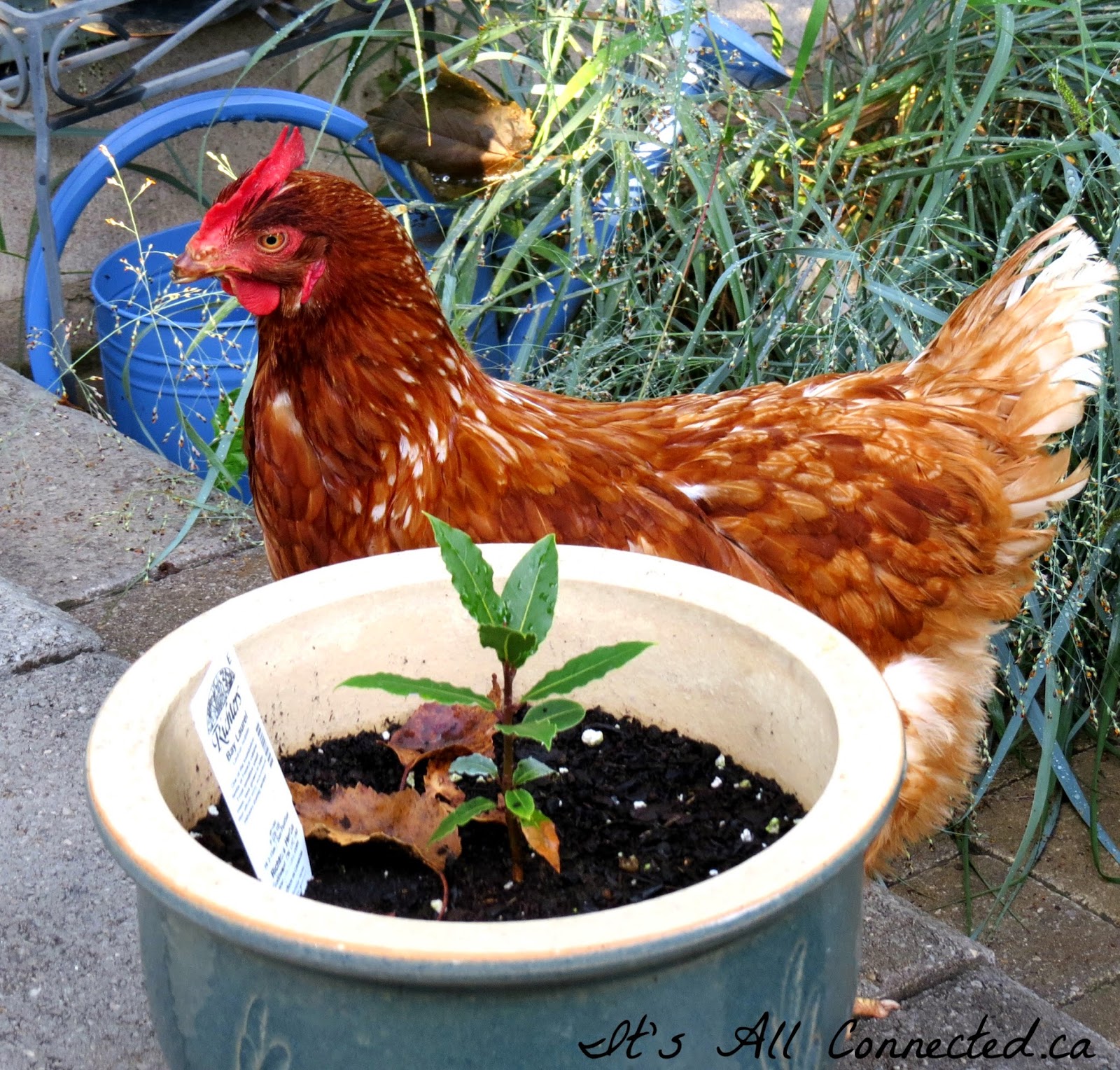 and weeks of trying to gain Viv's trust were destroyed as she headed for cover! ~ 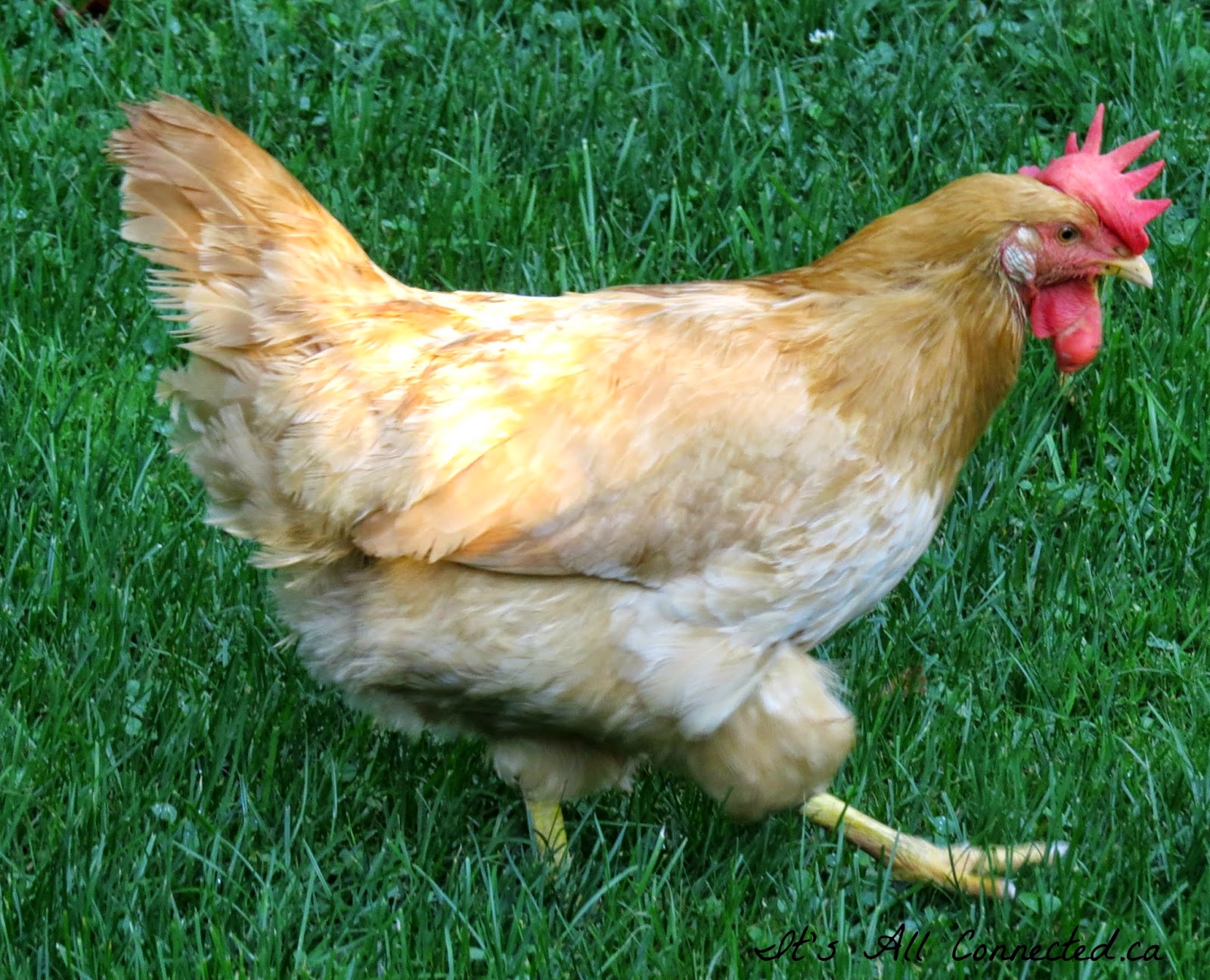 I wonder why she cringes when I come in the coop to tuck them in for the night now?

Farewell to summer and welcome fall.  It's on to canning and preserving, savouring the aromas wafting from the kitchen and revelling in the vibrant colours of my favourite time of year. ~ 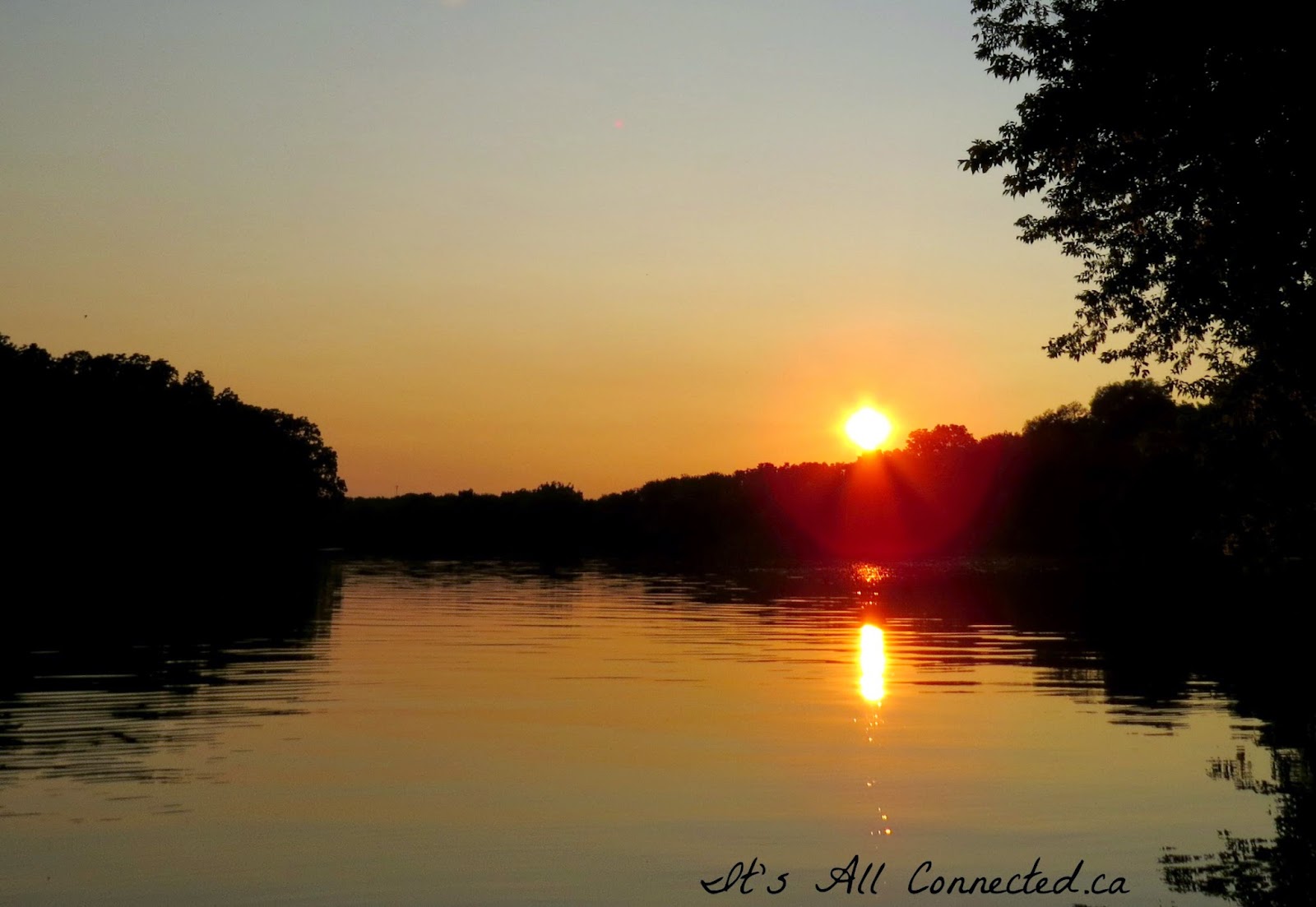 The sun has set on another season and I look forward to all the joys and challenges of the one that follows!

Posted by Maureen Wyatt at 00:38 No comments: