Did You Know Ovarian Cancer Researchers Need Your Help?

I'm using a new colour for my fall decorating this year, and for a very good reason.

I'm breaking out the colour teal and loving it! ~ 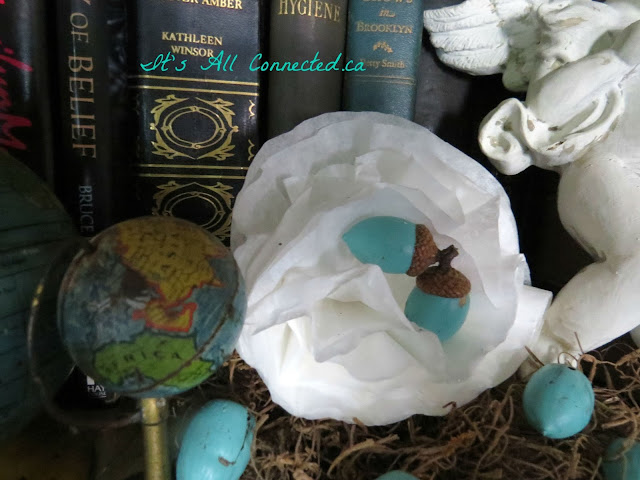 Acorns are getting painted teal and nestled in coffee filter roses, beside vintage globes sporting teal oceans. It's all nestled beside a shabby plaster angel on my bookshelves.

It is a daily reminder that the race for a cure for ovarian cancer needs the help of legions of angels and each of us can be one of those angels.

I'm going to do some blatant bragging about my son in law, Dr. Trevor Shepherd, now. He leads a team of scientific researchers at the Lawson Health Research Institute, in London, Ontario. 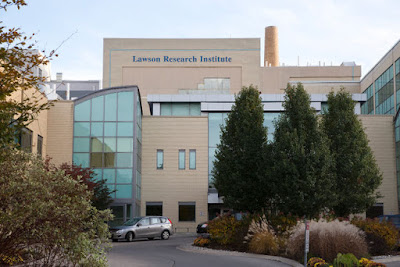 They have recently made a breakthrough discovery of what is being called a Jekyll and Hyde molecule and this discovery can have a profound effect on treatment protocols for women suffering from ovarian cancer. To read about this discovery, you can click on the link here. Ovarian cancer is a silent stalker, usually not diagnosed until it has progressed to the later stages. This kind of research can save lives and, with 2,800 women in Canada alone being diagnosed with ovarian cancer every year, that's a whole lot of women praying for angels to step up and help fund life-saving research.

Ovarian cancer research is poorly funded. It doesn't have the corporate sponsorship that breast cancer research has through the pink ribbon campaigns. Think of all the products you see with a pink ribbon on it. We are always happy to know that a portion of the sale goes to such valuable research.

Teal is the colour for ovarian cancer awareness and raising research funds. How often have you bought a product with a teal ribbon on it? It's just not out there for us to buy.

Trevor spends countless hours filling out grant forms and drawing up research proposals to keep his research funded. It uses up valuable time that would be better spent in the lab and in working with physicians on clinical trials. Still, there is never enough money.

I've often wondered if local fundraising was truly important to this kind of work. Trevor tells me it is critical to his work. He praises the organisers of fundraising events in his area and considers them important members of his research team. He never spends Mother's Day with his own mom or with his wife, the mother of his six kids. Instead, he gives a speech and joins in the London Run For Ovarian Cancer. It costs $200,000 to $300,000 to run the lab each year. This year, the run raised $189,900 of that money.

This is a wonderful opportunity for all of us to be shining angels. Small donations, even as little as $10 can make a big difference to your local ovarian cancer fundraisers. I urge you to look up your local fundraiser for this cause and give a little (or a lot if ya got it to give!). I guarantee you will be encouraging some research team to keep fighting the good fight!

This fall, bring on the teal. Wear it, paint it, talk about it and donate to it! ~ 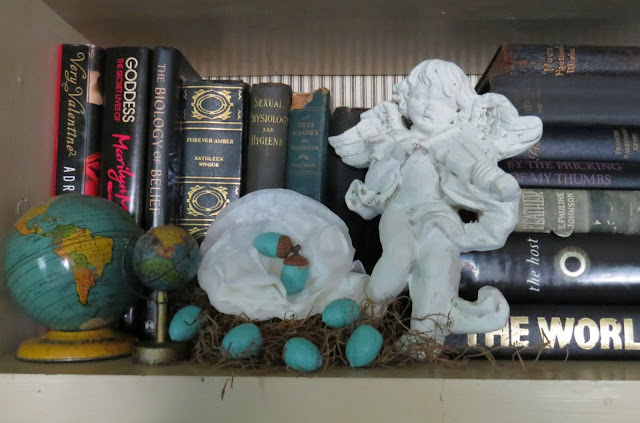 Don't forget to add an angel to the decorations because your help officially makes you one!

Posted by Maureen Wyatt at 00:26 No comments:

Email ThisBlogThis!Share to TwitterShare to FacebookShare to Pinterest
Labels: Fall Decorating, Some Thoughts

Why I'm Making My Own Cat Food

Poor Maeve became very, very sick this summer. She developed urinary crystals, a painful and potentially life-threatening condition. I dealt with that. Next, she showed symptoms of a thyroid condition. Veterinary treatment for hyperthyroidism in cats ranges from daily medication to radioactive iodine therapy. Neither is a good option in a cat that has started having violent allergic reactions. There was even a question of her being diabetic. 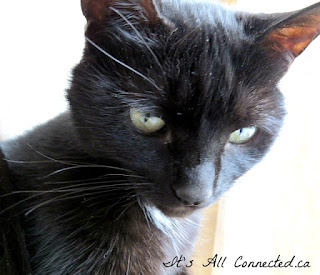 This little gal is only 4 yrs. old and her internal organs were failing, one after another. Treatments would run in the thousands of dollars and the prognosis still wasn't good. The first clue to what was making her so ill was a simple attack of hives. She was covered in them and clawed at them until she was raw, bleeding and almost bald. I took her outside with me to let the sun give her some relief. She seemed to feel much better and the hives began to heal over after a couple of days in the yard. Then, I discovered she had picked up a bad case of fleas outside. A single drop of the flea treatment you put between the shoulder blades caused such a violent reaction that she nearly choked to death.

That's when I decided to take matters into my own hands and go the holistic route. Maeve is a true feral cat, meaning she comes from multigenerational cats that have lived without human contact. She was undersized and only weighed in at 3 lbs. at her heaviest. I know all this information will make this a long post but I think important to any decision you make in changing what you feed your cats. Ferals survive on eating rodents and birds. The feline digestive system naturally breaks down the raw food and takes the nutrients, moisture and protein it needs and regurgitates the rest. That's the nasty, gooey thing your cat throws up if it eats the prey it catches. It's a perfectly normal process. My cats stay indoors and don't have access to wild food.

I had been feeding Maeve, and two younger ferals I've taken in, with a diet of canned cat food, a small amount of dry cat food and the odd serving of canned fish. It was the equivalent of Europeans introducing their diet to the North American Inuit people. Their systems couldn't handle it and neither can my feral cats. The dry cat food had grain in it. Removing the dry food immediately stopped Maeve's skin condition. Over the next few weeks, her urinary tract problems improved as well.

The food I found worked the best for her was Freshpet Select, a semi-moist food. Even grain free kibble had an immediate bad effect on her. Maeve is tiny and I'm treating her like the canary in the mineshaft. If a food isn't good for her, it most likely will start to compromise the health of the other two cats in time.
The problem I had with Freshpet Select, is that it is only available at one store in my area and they didn't always have it in stock. It was also a little pricey at $1/day per cat. It did have all species specific ingredients, but they weren't organic and I didn't know if there were chemicals that would build up in her system and cause new problems. I've done a lot of research on cat food now. Raw food is probably the best for felines, but I just can't bring myself to do it.

After that long preamble, I'll get to the cat food I made for round one.

I had 2lbs. of organic, chicken stock bones. I put them in a large pot, covered them in water and brought it to a boil. I reduced the heat to a simmer and cooked it just as you would making soup stock, for about six hours. ~ 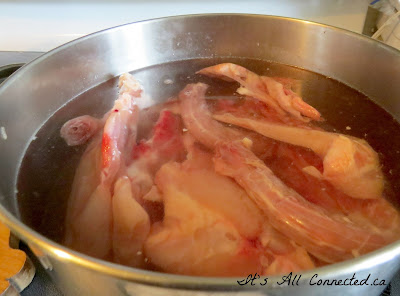 I'm going to add 2 hard boiled eggs, 2 organic carrots, 1/2 cup chopped parsley, a can of kippers and 2 Tbs. of coconut oil to the finished chicken. ~ 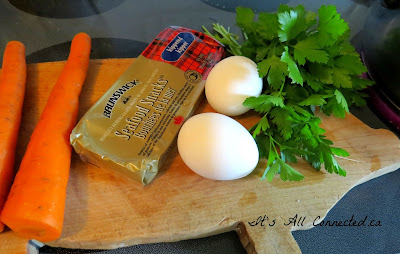 Kippers, sardines or canned salmon have soft bones that the cats need for calcium. The carrots and parsley are great sources of vitamins and minerals. The eggs provide protein. I could crush the shells and add them to the food for extra calcium but didn't want to have anything the cats might find odd in this new food while I was switching them over.

I cut the carrots into a small dice and chopped the parsley ready to parboil it when the chicken was done. ~ 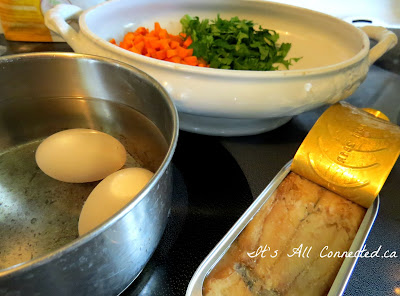 I put a colander in a large bowl and poured the chicken pot into it. This separated the chicken and bones from the broth. The broth is reserved. While it was cooling, I used 2 cups of the broth to boil the carrots and parsley for 5 mins. That's just to soften the carrots and get the chicken flavour through them. I don't want the cats eating around veggies and missing out of those nutrients.

Being careful to remove all bones, I combined the chicken, carrots, parsley, chopped eggs, kippers and coconut oil with two cups of the chicken broth. 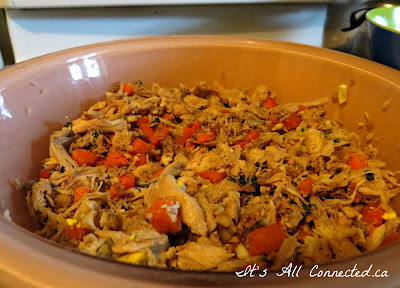 It may not look pretty, but you could feed this to your kids. Seriously, there's nothing in here but good food.

This recipe gave me 2 lbs. of pet food. I'm not sure how to cost it out for you. The eggs come from my own chickens, the soup stock bones were free with an organic meat order, the carrots might have cost a quarter each and the parsley is from my garden. So far, I've spent $1.09 on the can of kippers and a few cents on the coconut oil. In the future, I'll introduce other meats, probably leftovers, and use the remaining chicken broth for flavour and nutrients.

Next weeks food and the extra broth is all ready for the freezer! By saving the broth, I can make another batch by simply cooking some chicken and veggies and adding the other ingredients. It isn't a six-hour process every time. ~ 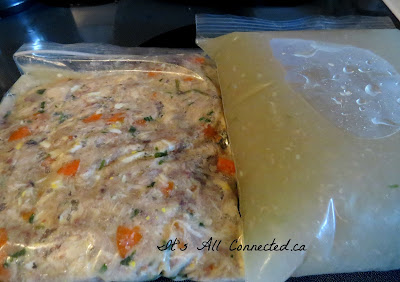 In case you would like to give this a try with your cats, I've done a printable of the recipe for easy printing or pinning. ~ 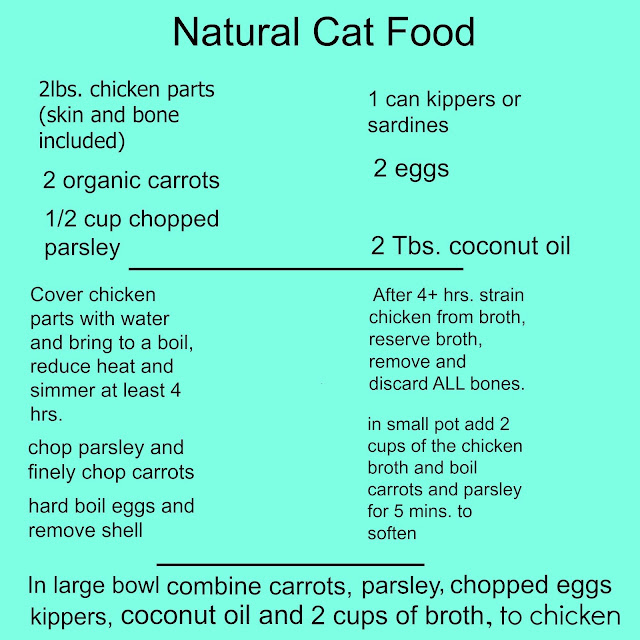 Did Maeve, Michaela and Clara Jane like it? Never in my life have I heard cats purr that loud all the way through their dinner! I couldn't even get them to lift their heads for a picture. ~ 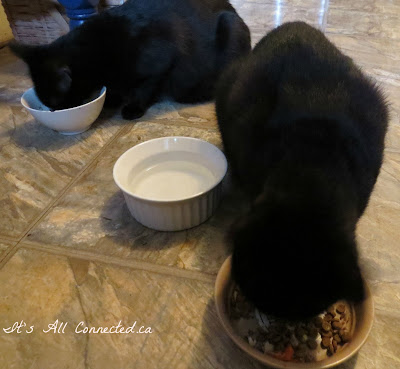 Not one speck of food was left in the bowls!

What are you going to do when a friend brings you a whole case of vintage sealers that she has taken the time to date?  Why, you match them up with collectibles from the same year!

A little rummaging in my stash of hoarded junk fabulous vintage sewing supplies yielded metal sewing machine bobbins, wooden spools of thread, Bakelite buttons and snaps and hooks still on the cards. I never could bring myself to get rid of these goodies, so carefully saved by generations past. 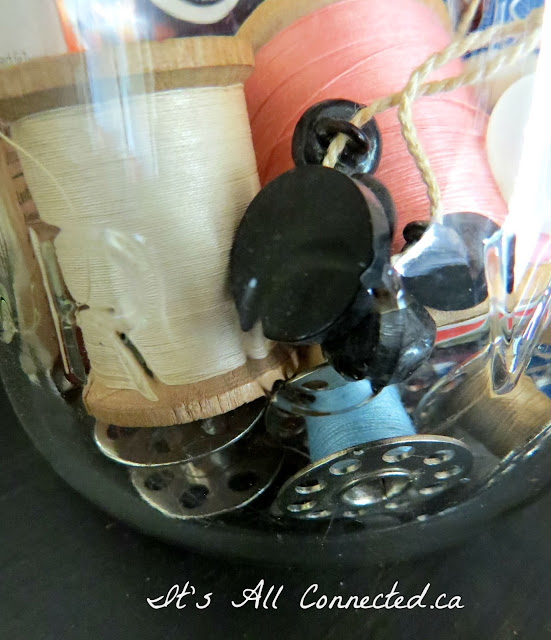 Marilyn has dated this jar as 1944. World War II is still raging and the folks at home are struggling to make do, with what they have, under rationing conditions. I remember my Auntie Kay talking about taking her sister's winter coat and making it over into a coat and leggings for her own little girl. Her sister wouldn't be home for awhile to need it as she was serving overseas as an RCAF nurse.

A bit of vintage lace wrapped around the neck of the jar makes a pretty backdrop for a scrap of fabric stencilled with the date. Of course, I used teal coloured paint in honour of September being ovarian cancer awareness month. 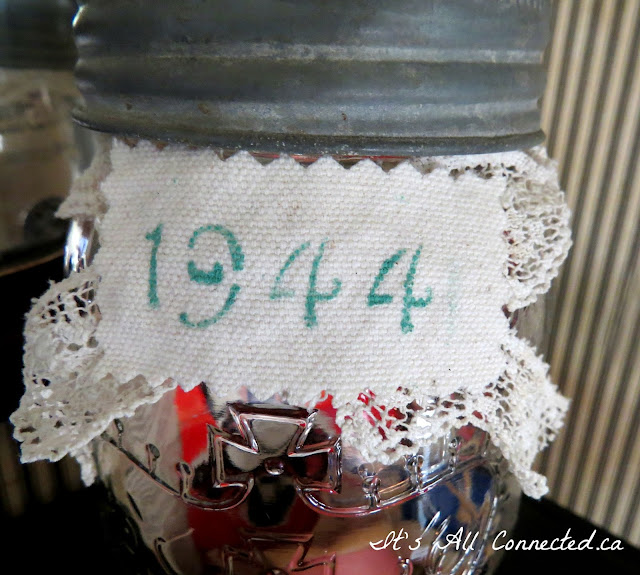 I think it's a lovely way to organize this little collection and I hope it conveys my appreciation to all those clever ladies who kept the home fires burning and the children clothed, without taking a thing away from those who were so valiantly serving their country. 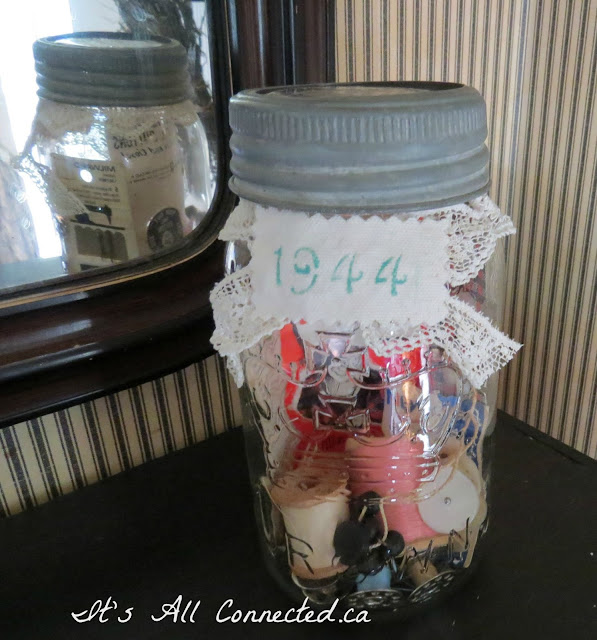 Well, to be honest, my RCAF aunt wasn't all that thrilled to come home and find her sister had chopped up her good coat for a snowsuit. The reason I know the story is because she was still complaining about it twenty years later!

Thanks for the jars, Marilyn. I had fun with this project!

I'm joining the parties at - Make It Pretty Monday
Posted by Maureen Wyatt at 18:15 No comments: