My brother and his wife, my sister and her husband and I have started working on the rental property.  The initial work was all about taking truck loads of garbage to the dump. Then came the cleaning and repairing.

That let us see what was salvageable and what was beyond hope.  Luckily, we all agreed on everything.  Like that would be possible!  We're siblings!  So, we argued and won or argued and lost and settled on what was most likely to sell the property.  We have already lost $8,000 on this property in the last four months and will have to use credit to make any changes or upgrades.

The evicted tenant stripped everything out of the building that she hadn't already broken, so we have a large square footage of flooring to buy and bathroom fixtures to replace. That will chew up most of our money.  We also want to address some not too attractive things that you find in very old buildings, which have been worked on by everybody who thought they could swing a hammer.  It's going to be DIY all the way and I thought you might like to see what we are doing.  I warn you there aren't any pretty after shots yet!

As my sister and I were painting the staircase, I mentioned that, if it were my home, I would close the door that led from the kitchen to the staircase and reopen the original door that led into the living room.  It's wonky where it has been cut for carpeting and someone had the brainwave to install a floor vent in it.  It also is a fourth door in the kitchen, making furniture placement difficult.

See what I mean about wonky? ~ 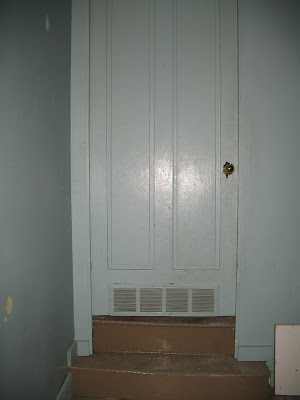 It opened into a dark, tiny vestibule. ~ 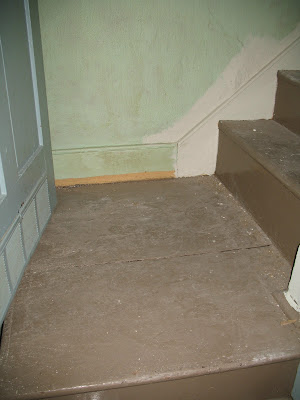 Behind the open door is a furnace pipe, the old door and 3 makeshift shelves. When this door is closed, you see exposed electrical boxes and there was an acoustic tile ceiling.  The ceiling is already down in this shot. ~ 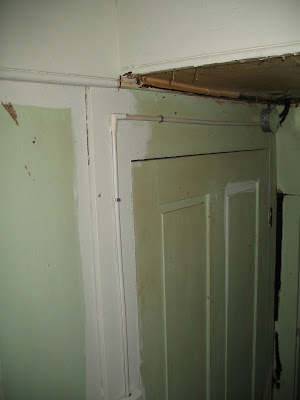 The staircase was very dark in the lower section. ~ 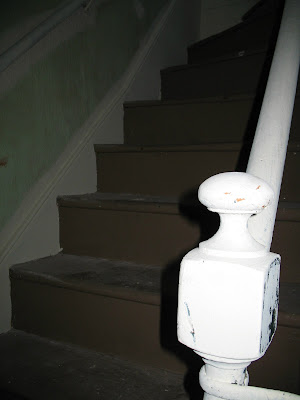 It opened into a well lit upper hallway and was a little less gloomy at the top. ~ 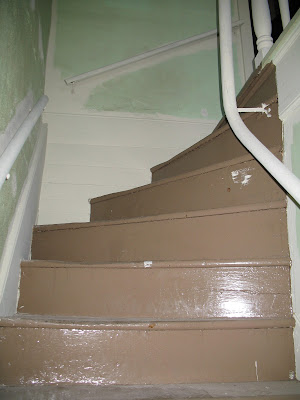 My sister slipped away and must have had a talk with my brother.  The next thing I heard was a skill sawing chewing through the drywall on the living room side.  That's a window, not a door, you are seeing to the left of the new staircase opening. ~ 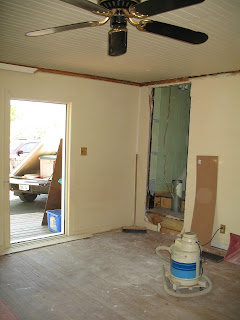 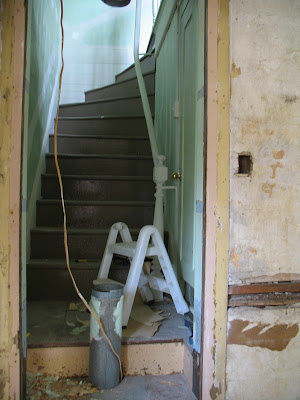 Now to clean up the electrical, remove the furnace pipe and install a new ceiling!

Does anyone else have a man around them that will argue forever that a doorknob doesn't need to be changed but doesn't bat an eye over sawing through a wall?  My brother is weird!  Good weird, but weird!