The Story Behind Blue Willow China

Several of my readers have commented on the Blue Willow dish I served my perfect poached egg on.  Willow pattern may very well be the most recognizable and beloved pattern in vintage china.  You can scarce find a person who doesn't remember that design on their grandma's good dishes or their mom's teapot.

I have ten 6" plates that I use as bread and butters or dessert plates, with my white china.  I always use one for my morning egg.  Why do I go to that much trouble? Because I'm worth it! ~ 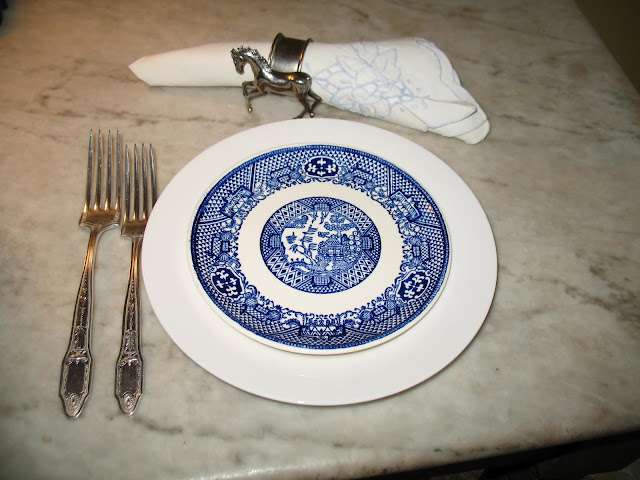 By the late 1700's, the popularity of tea sets imported from China spurred British potters to copy their style of decoration.  The first willow design may be attributed to Thomas Turner of Caughley Porcelain in 1780.  William Spode and Thomas Minton both copied his pattern in 1790.  The most popular colour was blue, followed by pink, green and brown.  It is always on a white background and the pattern is applied as a transfer.

The romantic fable associated with the pattern, and probably invented by Spode, has it's origins in England and has no links to China.

The most popular version is a tale of star crossed lovers; a wealthy mandarin's daughter and her father's lowly accounting assistant.  When the father discovers their love, he fires the assistant and builds a fence around his property to keep him away.  You'll always see a fence around the teahouse.  The boat in the pattern carries a rich duke, who arrives with a chest of jewels and plans to marry the girl.  The lover sneaks in and steals the jewels and the girl.  You see the couple running across the bridge to escape to an island, but the father is close behind with whip in hand.  The couple are killed.  The first versions didn't include the two birds.  Later versions had the gods taking pity on the lovers and allowing their souls to take the shape of doves and fly off together.  Awwww, how sweet! 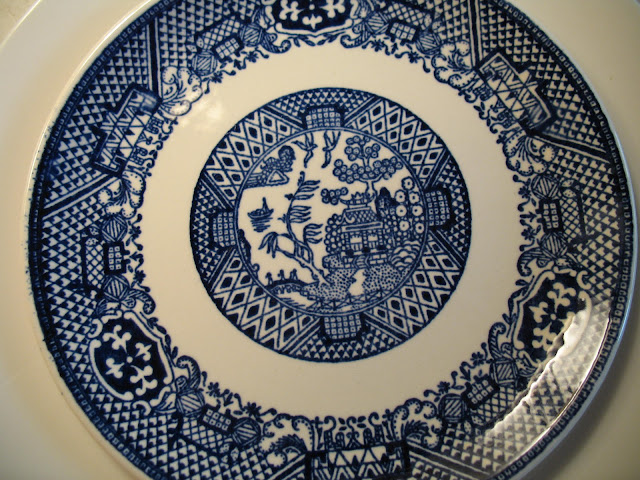 Without a doubt, Jane Austen and her heroines dined from this very pattern! ~ 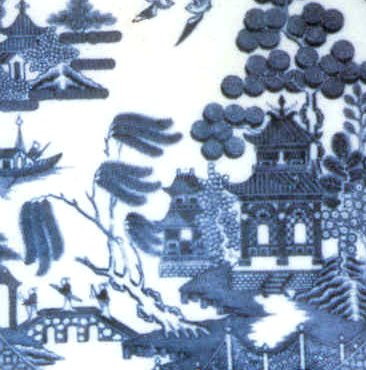 Anne Shirley will have had a piece or two in her House of Dreams and Carolyn Ingalls may even have had a teaset by the time she reached Plum Creek.

I found the most unusual use of the pattern on a blog called Pigtown Design. Imagine having a Blue Willow ballgown! ~ 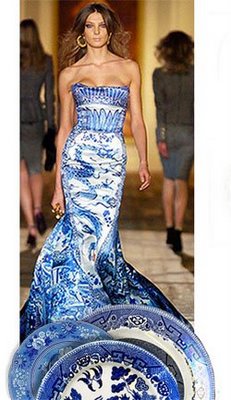 You might want to be on the thin side to wear this so you don't look like one of those 70's wallpaper murals entering the room!

Email ThisBlogThis!Share to TwitterShare to FacebookShare to Pinterest
Labels: The House