I'm Irish.  Well, half Irish.  That is, my mom was 100% Irish and she preferred to ignore that her children's father was English.  She gave us Irish names and told us stories of our genealogy (excluding the English side of course) and expected us to act like the displaced royalty she always said we were.  If we did anything she considered uncouth, she reminded us that we were direct descendants of Brian Boru and, therefore, "descended from kings.".  The fact that she had never set foot on the 'ole sod' didn't stop her from waiting for our ancestral lands and Norman castle to be returned to their rightful owners.

Soooo - while I'm waiting, I celebrate St. Patrick's Day with some of the things that mean Ireland to me.  I'm not big on leprechauns and pots of gold.  That cuts out the usual decorations that are in stores and I'll have to make my own.

I need a banner for my loyal knights to rally around! ~ 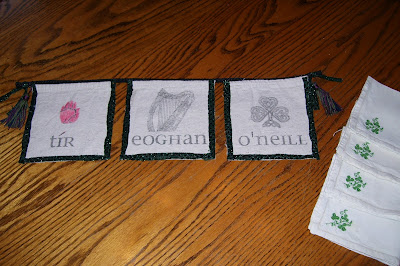 I might have been influenced by having just finished reading the first book in the A Game Of Thrones series with all the knights in bejewelled armour, carrying their banners into battle. ~ 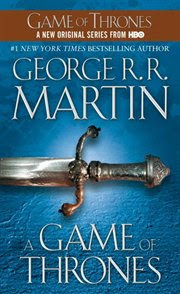 I start with some pieces of painter's drop cloth and this jewel encrusted green fabric. ~ 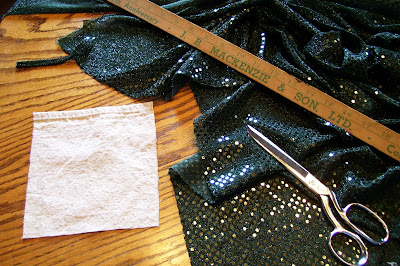 I'm from the O'Neill clan and chose their heraldic symbol of a bloody hand for one pennant.  We O'Neills are really fun people.  I have to draw the hand with a fabric marker since those images aren't all that popular in clipart.  I do find an image of an Irish harp. This one is a copy of the Brian Boru harp that is in the Trinity College library in Dublin. Did I ever tell you that I worked on Loreena McKennitt's beautiful Celtic albums when I was in the music biz?  I love her!  For the third pennant, I found an image of a Celtic style shamrock.  I inverted the images and printed them on a lazer printer.  You can use the Critrosolv transfer method Here.  I decided to try the Chartpak Blender Pen that Wendy from Herballistic Garden gave me.  It's the same method but takes a lot less rubbing to get the image to transfer.  I had cut strips of the emerald fabric, rolled them for a 3D effect and glued them on the pennants. ~ 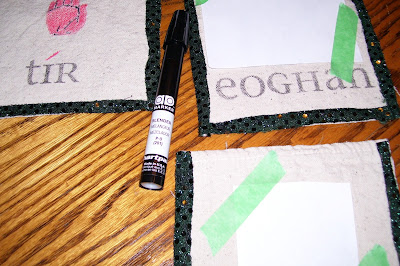 A scrap of green piping and a couple of $ store tassels and she's ready to hang under my little $4 shelf, proclaiming that this is Tir Eoghan (Land Of Eoghan), stronghold of the O'Neill clans. Some Irish books and sheet music sit on top of the fireplace. ~ 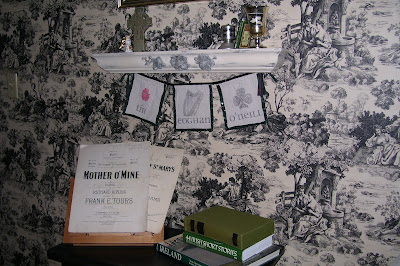 The shelf holds another tiny book of Irish quotes, a porcelain angel made in Ireland that belonged to my mom, a Celtic cross and my grandma's silver and green stone pin that was made in Ireland.  The angel is missing a wing and I don't want to talk about that.  Just say, "Maeve is a bad cat!".  Never name your cat after an Irish warrior queen. They don't follow rules! ~ 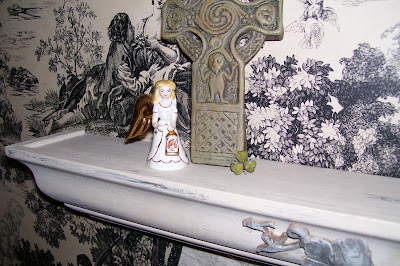 What have I forgotten?  The sea of course!  I donwnload an image from The Graphics Fairy that she calls a mermaid.  That she is holding a baby seal tells me it is really one of the fabled Irish sea creatures, a Selkie. I give her an emerald crown and put her in a Georgian Era silver frame.  ~ 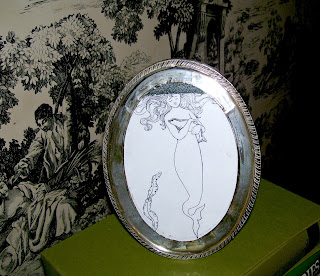 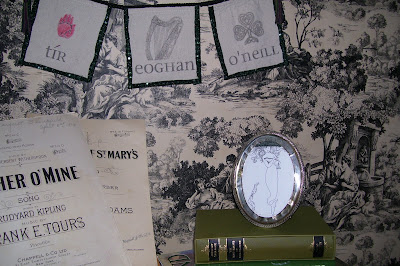 Rally round my brave bannermen and we will retake Castle Shane to restore the honour of the mighty O'Neills!  Or, we can sit here, sip on some Irish Mist and listen to Loreena Mckennitt if you prefer.


I'm tipping my glass at these parties: