Technically, it's day three because I'm late getting this post up.  We're doing this in real time folks and I've been busy.  The roofers arrived a week early and had to cut a lot of tree limbs away from the house before they could start.  I have to cut up and haul all those limbs away!  I've had company three times today and a friend brought me fresh corn to do up for the freezer.  What all that means is that I didn't have time to think about special meals or staging pictures.  Because I have more than a year of eating natural meals behind me, it all worked out for the challenge anyway.

I never hear anyone say they don't want to eat natural, healthy food.  I do hear them say they don't know how to find the time or the money for it.  For me, it was not a religion but a goal that I worked toward and having a good size vegetable garden is a big help.  I go to our local farmer's market for extra produce.  Even without space or time for gardening on a large scale, pots and planters can give you a nice supply of fresh, chemical free vegetables.

I've had a lot of fun with a salad greens garden planted in an old wheelbarrow.  I just roll it out of the way to cut the grass and move it into the shade in the afternoon so things don't bolt in the heat. ~ 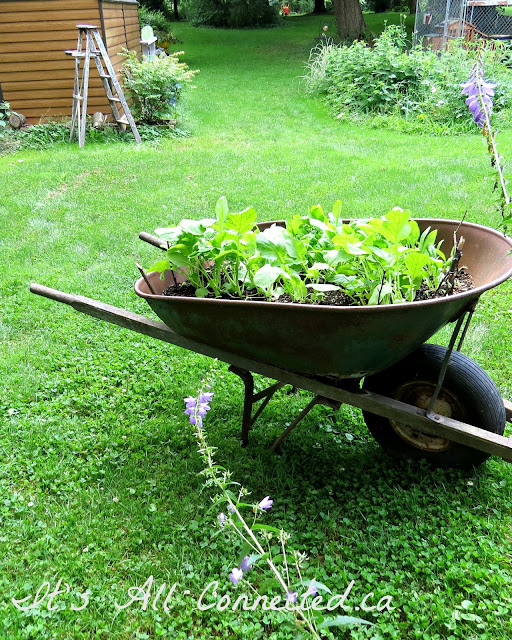 It's giving me gourmet baby spinach ~ 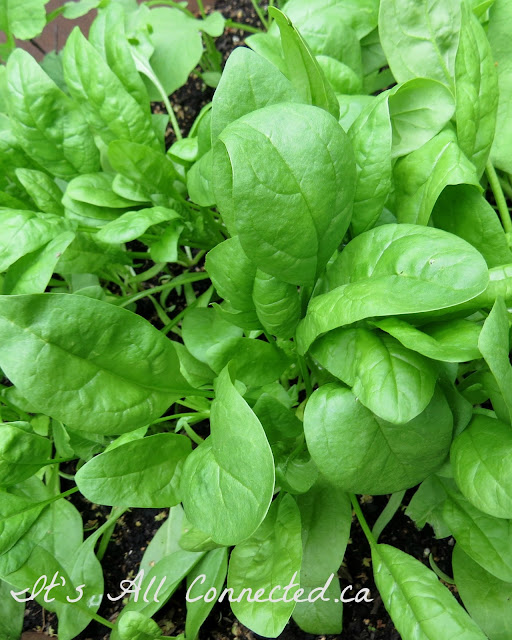 and perfect radishes, all without weeding!  I've just planted some parsley along the edges to take over when the spinach and radishes are done. ~ 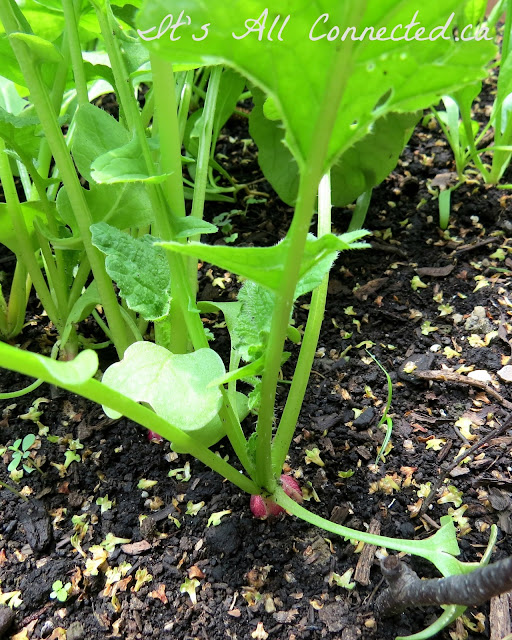 I freeze all the produce from the main garden that I can't eat. Today it was beans and peas. ~ 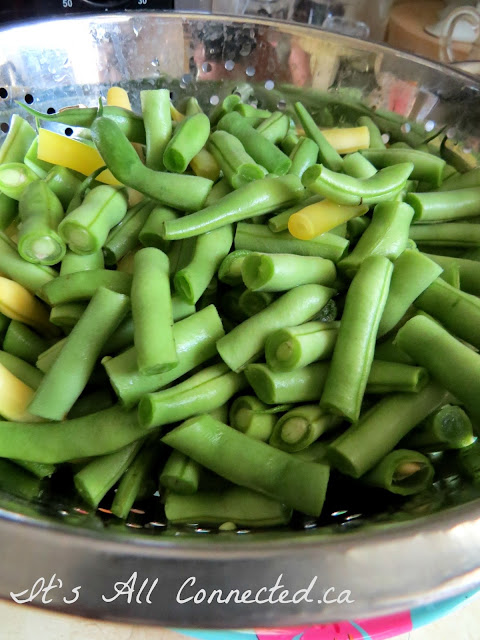 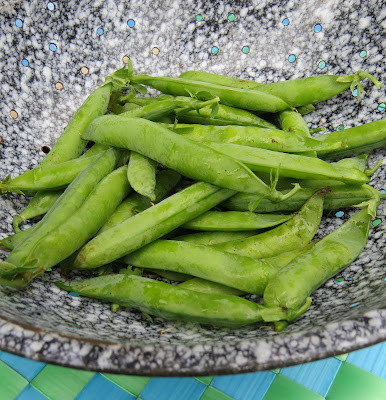 Drying herbs is an ongoing thing over the summer.  It's quick and easy to do, saves money and I know there are no pesticides on them.  Every couple of days I cut some herbs, trim the woody stems away and mince them in a little, electric chopper.  Then I spread them out on a plate to dry for a day or two and store them in glass jars for the winter. ~ 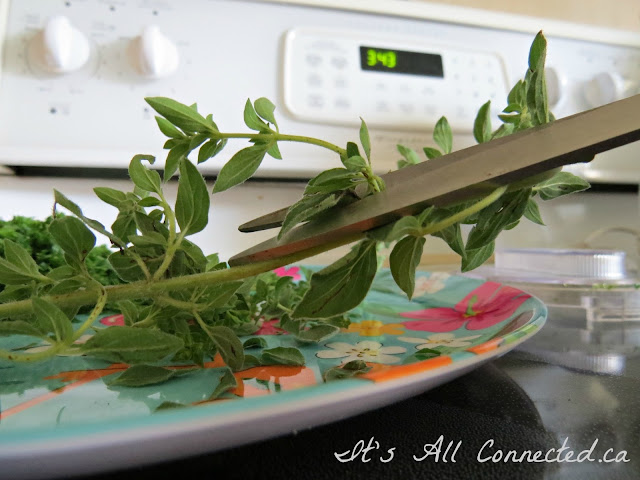 I'm a basil addict, so I make sure to make lots of pesto and basil flavoured olive oil.  Nothing could be simpler to do.  I use the little chopper to cut up garlic, add basil leaves, sea salt, pepper and olive oil and give it another good chop.  Put the mixture into ice cube trays and pour olive oil on to cover.

I keep the tray going until it is full, ~ 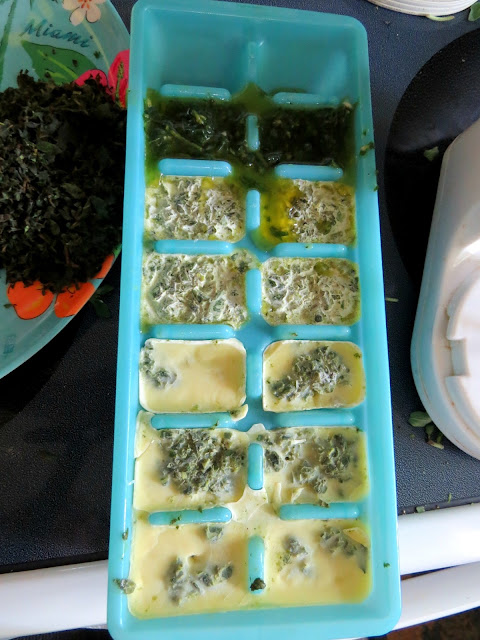 then, turn the frozen cubes out into a freezer container and I always have a base for salad dressings, saute oil and bread dipping oil on hand. ~ 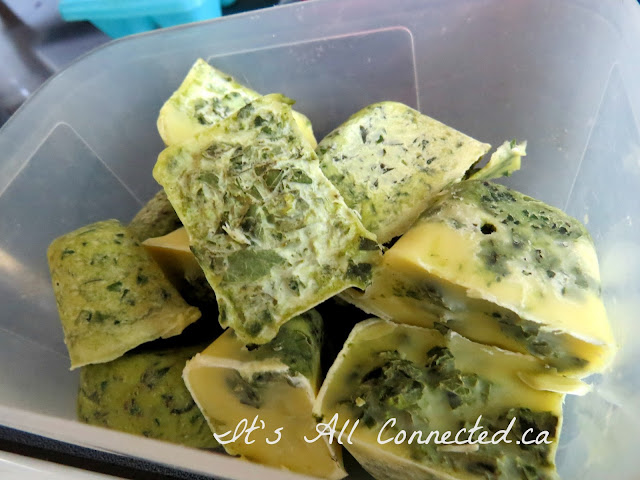 So, what did I eat today?  I don't move in the morning without a big cup of coffee.  I keep my eye out for a good deal on organic, fair trade coffee and stock up on it.  The last time, I bought six bags that were marked down to half price and stored them in the freezer to keep them fresh. As usual, I had an egg for breakfast.  I'm lucky to have my own chickens, but even when they didn't lay during a moult I bought free range eggs.  I broke the rules when I had bread and jam at lunch.  We're not supposed to be eating refined sugar during the challenge.  Does it count that I made the jam myself from organic berries?

While I'm doing corn down for the freezer, a friend dropped in and I needed to come up with a quick supper for us both.  So, I ordered a pizza.  Just kidding!

Left over cooked salmon, minced with a fork and mixed with an egg and bread crumbs made patties.  I coated the top side of them with parsley I had already chopped up to dry.  Prep time on that was about 5 mins. ~ 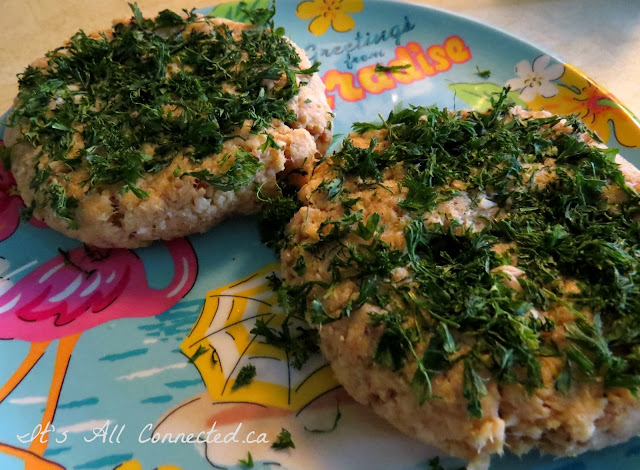 New potatoes were tossed in some of the basil oil to roast and halfway through I put the salmon patties in the same pan.  Drop a few cobs of corn in a pot to boil for 6 to 10 mins. and supper was done in one half hour. ~ 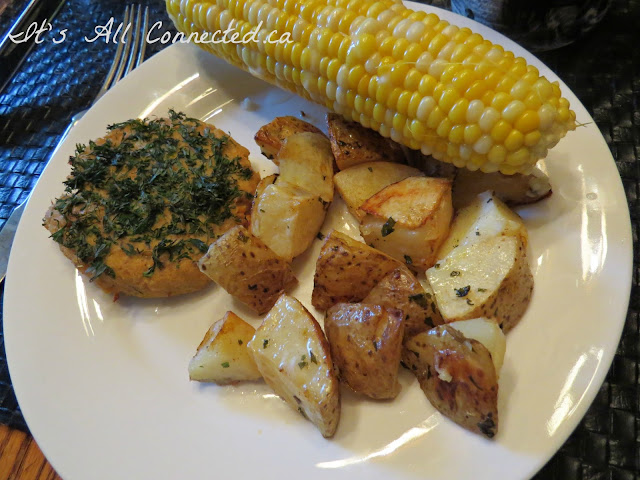 As you can see, I haven't staged any of this.  The food is tossed on the plate and I took a quick shot.  You can't keep your dinner guest waiting forever while you take pics for a blog post!  She was busy shutting the kittens in the bathroom, so they didn't attack us while we ate, and that gave me time to take this pic.  In honour of the birth of the new prince, we had a cup of British Invasion tea.

This all sounds very organized, but believe me the day was chaos!  Simple food was dressed up with herbs and oil.  Dinner was ready in about 30 mins., with a minimum of effort, and probably cost about $5.

My friend Mel at Mellywood's Mansion lives in Australia and she has a great post on how she started her garden with a few pots and moved on to turn her suburban yard into a great source of cheap, healthy food for her family.  She has five kids and a tight budget while she is home with the two youngest ones.  Her two eldest boys have been involved in the garden from the beginning and they and her husband are the ones who do most of the work in it.  The part I find wonderful about that is, that the kids have learned to appreciate real food and Mel says they are heavily involved in the cooking of it.  Those are habits that will last a lifetime!

Check out Mel's garden by clicking here. Yeah, that's a lemon tree in her back yard! ~ 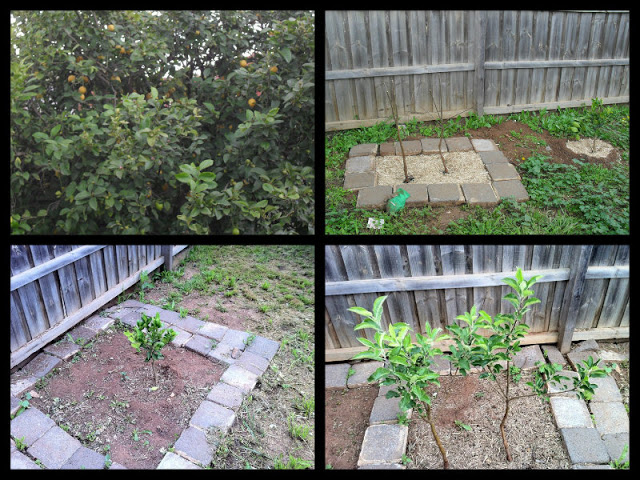 As the day ends, I head back to the river.  I step on the dock and the movement causes ripples. I think about how every action I take in a day has some ripple effect that I'm not even aware of.  All these small changes I make are my protest against things I believe are killing us and destroying our planet.  I hope it has a ripple effect! 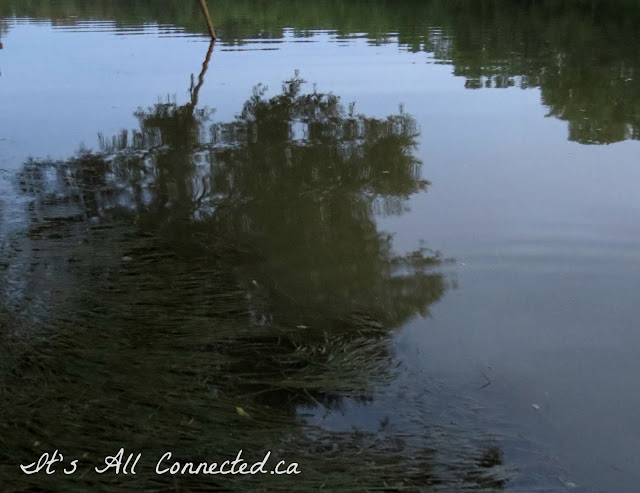