A Naked Man On My Roof!

Day three of the

and I have a little distraction to deal with.   In the morning, I saunter out to the chicken coop in my jammies and what should I find on my roof but this! ~ 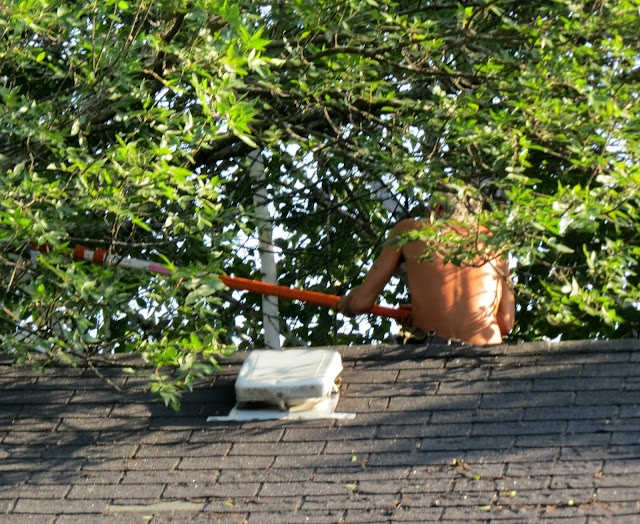 Hmmm - I 'd better hang around and talk to him about the tree trimming.  I'd better take him some water an hour later.  I'd better  discuss all 20 trees in my yard an hour after that.  I was so busy being a good hostess that it was hard to get anything done all day!

The limbs had to come off before the new roof went on.  I'm not saying I needed a new roof.  You be the judge. ~ 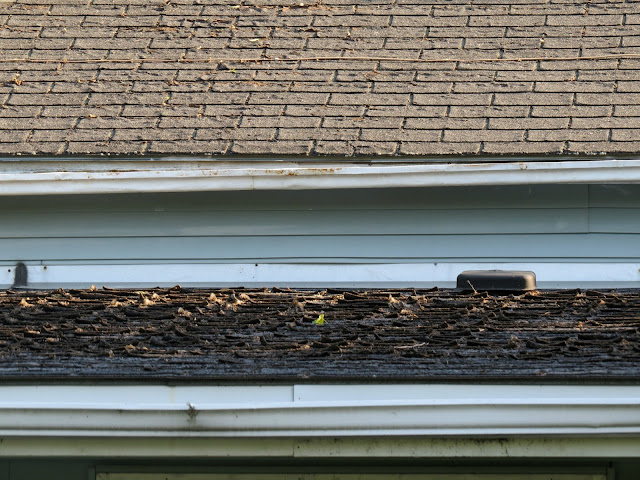 Can you believe that lower roof is only 7 yrs. old?  I'm not having that again, so I bit the bullet and had steel installed.  It was a definite OUCH but I figure I never have to think about roofing again!  I suppose I might have to if all this good eating makes me live to 120, but I'll risk it. I won't have to crop pictures so much any more so you guys don't see the awful roof, either.

My hostessing duties left little time to prepare dinner and I had to go to Nature's Ultimate Fast Food. My girls took a little time off digging up the new grass I planted to spit out a few eggs. ~ 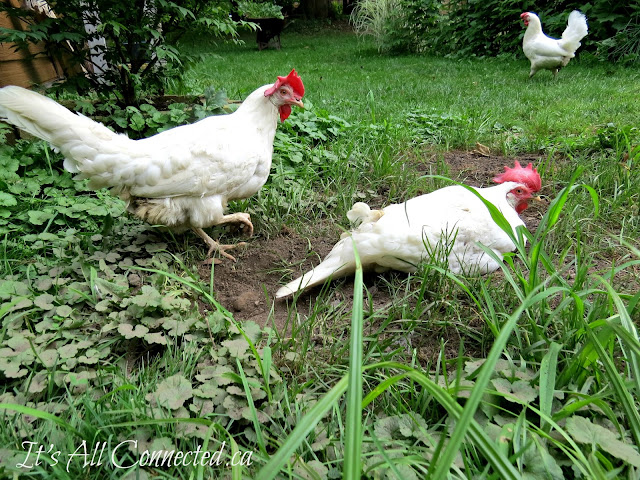 Did they dig up the creeping weed?  NO.  They dug up the grass I planted to fill in the old fire pit, just so they could take a dirt bath.  Much more of that and they'll be taking, as Texans say, a permanent dirt bath!

How about spaghetti frittata for dinner!  This is a great way use up leftover spaghetti.  I ALWAYS cook too much pasta.  For the challenge, I should have made my own pasta, but I didn't.  As committed as I am to making my food from scratch, I'm not leaving that naked man out there while I wallow in eggs and flour and cut spaghetti noodles!

Put a couple of tablespoons of oil in a frying pan and get the oil hot enough to make a water drop sizzle.  I used half and half extra virgin olive oil and coconut oil, to get the benefits of both oils.

Add the cold spaghetti to the pan and spread it out to cover. ~ 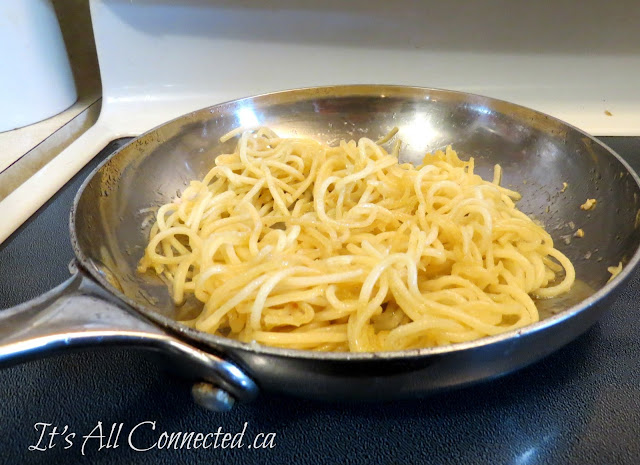 Cook for three minutes on medium heat, until the noodles have crisped up a bit.

While the spaghetti is cooking,  beat eggs.  I had two egg whites in the fridge and added another whole egg.  Dice up some cheese into fairly large cubes and grate some Parmesan cheese.  I used a locally made sharp cheddar and some organic mozzarella.  I want to try making mozzarella, but just haven't done it yet.  Add all the cheese to the egg mixture.

Add any flavourings you fancy.  I went with fresh parsley and basil, ground black pepper, Worcestershire sauce, green peppers and a dash of turmeric.  Eggs and turmeric are a match made in heaven and studies show turmeric is the element in curry that acts as an anti carcinogen.  Any combo of herbs, spices and veggies you fancy can go in this.  Cooked bacon or prosciutto would be great!

All ready for the lid to go on. If you don't have a lid for your pan, use a metal pie plate. ~ 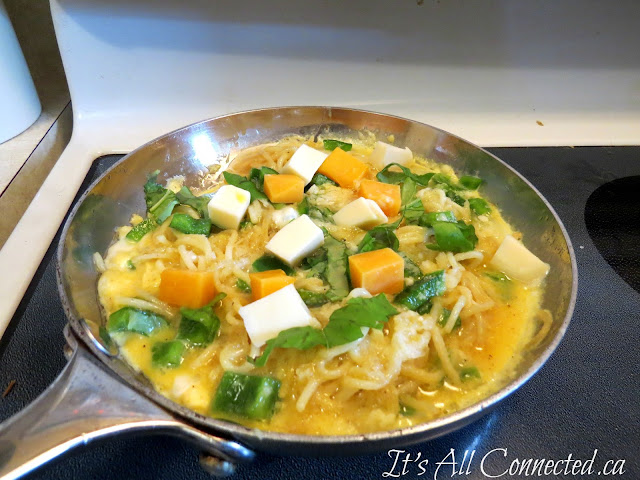 After the spaghetti has cooked for three minutes, pour the egg mixture over it and lower the temperature to low.  Put a lid on the frying pan and cook for 10 mins.

Remove the lid, invert a plate over the frying pan and turn the fritatta out on to the plate.  Slide it back in the frying pan, browned side up and cook for 5 more mins.

I added a side salad of mixed greens with a dressing made from lemon juice and my basil oil.  I simply mixed equal parts and gave it a stir.

If you already have the cooked pasta, this entire meal can be put together in 20 mins.  It would take me that long to make Kraft dinner and this meal is  packed with nutrition.  The clean up is only one pan and a mixing bowl.  Yay! 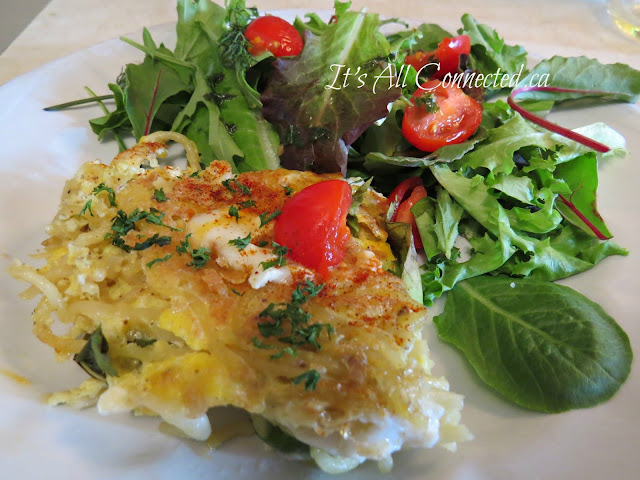 If I figure the eggs at 50 cents each, bought an organic mixed salad for $5 and used half the package  and used half the frittata per person for a generous serving, I figure this meal would cost $4 to serve 2 people.  I'll use the leftover frittata for lunch the next day.  It's really good cold! 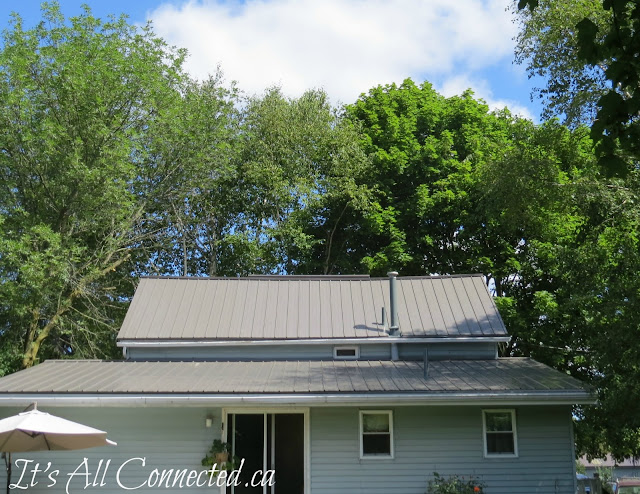 I can start putting everything back on the front porch. ~ 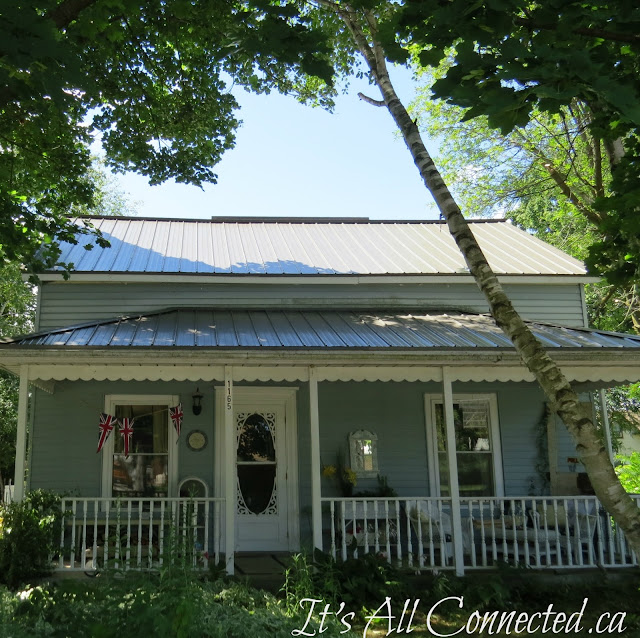 The pile of tree limbs I have to move is down to this pile of brush. ~ 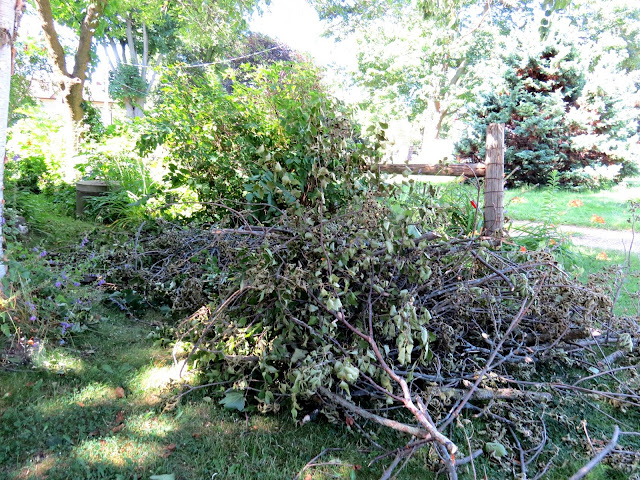 The naked distraction is gone and I have time on my hands to start building a still.  You really didn't think I was going to drink nothing but loose tea, organic coffee and lemon water all week did you?

I'm stomping on grapes while we speak!