The Sequel to Attack Of The Killer Tomatoes.

With a film that great you know a sequel has to happen!  This, however, will not be a trilogy.  I promise this is the last post about tomatoes.  That's because this is absolutely the last day I am messing around with these things!

My fingernails are turning orange.  I'm not sure if it's because I'm eating so many of them or from being up to my elbows in them as I peel and seed them.  Whatever the cause, it's not an attractive look.  There goes my hand modelling career!

I did want to get a basic spaghetti sauce done for the freezer.  I made one batch with about 12 cups of tomatoes and a second batch with half as many tomatoes.  Using the same amount of spice in both made the second batch much stronger in taste and I'll use it for pizza sauce and any dishes that have cream added to the sauce.  For the last couple of years I've used a recipe from Food.com and it freezes very well.

1. Heat oil in large pan and saute onions and garlic until onions are translucent
2. Add all other ingredients and heat to boiling
3. Reduce heat and simmer for 2 hours, partially covered, stirring occasionally

This smells heavenly as it simmers ~ 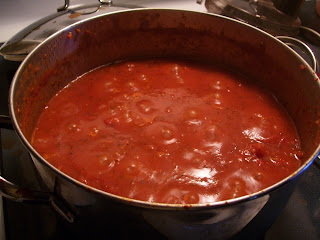 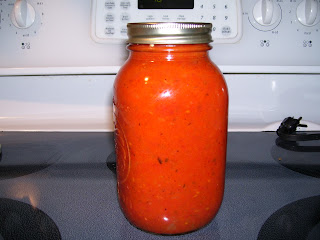 I was at a loss as to what to do with all the grape tomatoes from the plant that seeded itself in the garden and decided to try freezing Bruschetta mix.  Last year I discovered that the trick to not having basil turn black in the freezer is to cover it in olive oil.  I may be the last person on the planet to discover that but I am rather busy saving you all from killer tomatoes.

I diced the grape tomatoes and chopped the onion and basil in this dandy little chopper I bought at Zehrs for $10.00. 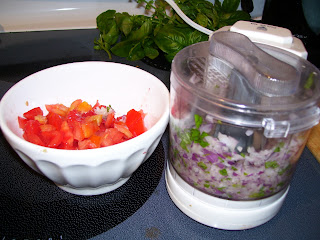 I discovered that little kids love macaroni, hamburger and spaghetti sauce casserole.  I grate a little cheddar cheese on top but the kids are fine without any gussying up.  How easy is that?  With seven grandchildren I need all the simple recipes I can find!

For one more day, my neighbours are safe from finding bags of grape tomatoes on their doorsteps.