Attack Of The Killer Tomatoes

If you ever saw the film Attack Of The Killer Tomatoes you will know just how scary they can be!  Well, the movie wasn't actually scary.  A tomato is somewhat limited in the creature taking over the world category.  How that flick was released in the same year as Star Wars beats me.  I'm going to assume it was a spoof on the 1950's sci- fi movies. 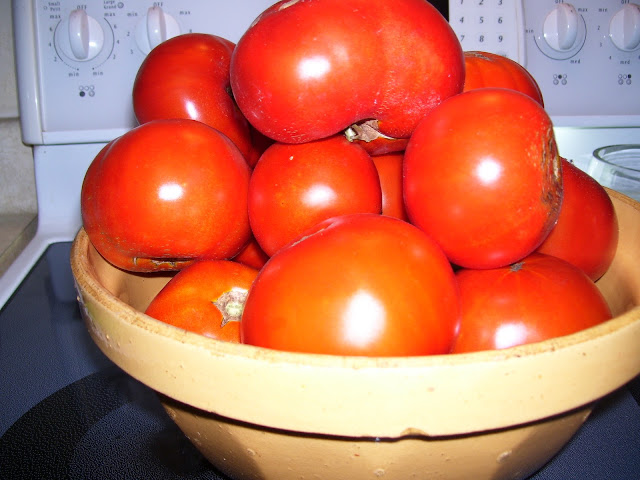 Real tomatoes taking over your kitchen, however, is scary.  I have plenty of my own and my sister has brought me bags more!  I know how much I will crave the taste of vine ripened tomatoes in February when all that can be had is a tasteless, rubbery, orange thing trucked from heaven knows where and costing $2.00.

I'm, also, determined to make as much of my food from scratch as possible.  It's just common sense to avoid anything in a package or commercial can.  If I make it myself, I know exactly what is in it.

I started my counter attack with making tomato paste.  I hadn't made it before and the net is full of recipes for it.  I went with the one from a great blog, The Italian Dish.  This is a beautiful site and she makes everything from scratch with natural ingredients. 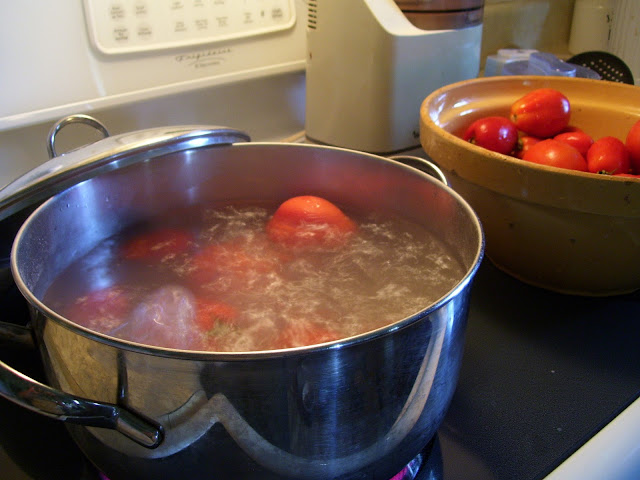 I peeled and seeded 6-7 lbs. of tomatoes (about 30).  Over ripe fruit is best for this recipe. The easiest way to peel them is to pierce the skin and drop them in a pot of boiling water. In about 30 sec. the skin will split and then I pop them in an ice water bath.  The skins will slide off easily.  I cored them and scooped out most of the seeds.  You can skip this step if you have a food mill that separates the pulp from the skin.
You could leave them plain or spice them up as follows:

Simmer in a large, stainless steel pot for 10 mins.  Remove the bay leaves and chop the rest in a food processor.  I deviated from the other  recipes by putting the chopped mixture in a fine mesh sieve and letting it drain for 30 mins.  This shortened the baking time from 4 hrs. to 2 hrs.

Lightly oil a baking sheet and spread with the puree.   Bake in a 300 F oven.  I used my convection setting, stirred it a couple of times over a 2 hr period and it was done.  If it is very runny, when you put it in and you are using a conventional oven, the baking can take 4 hrs.  The point is to dehydrate the mixture to a paste consistency. 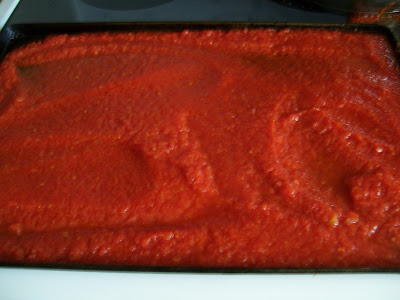 You can keep this in a jar with a layer of olive oil on top and it will keep for up to a year in the fridge.  I'm going to freeze mine in an ice cube tray and transfer the frozen cubes to a container for 1 tbsp. servings.

Here's the fabulous after ~ 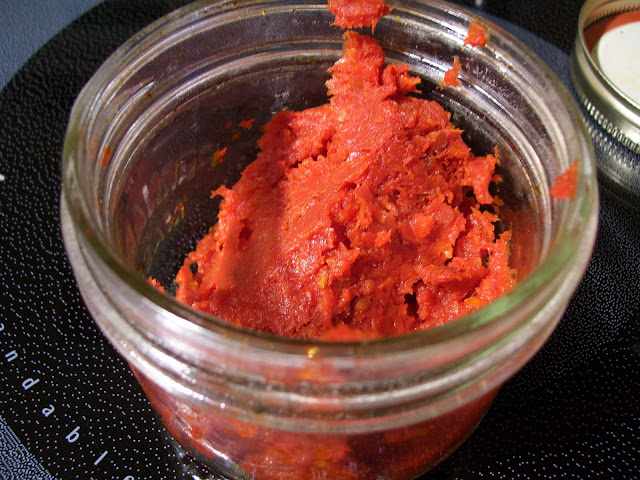 The result was a flavour that is out of this world and a fitting end to the villainous Killer Tomatoes!
Posted by Maureen Wyatt at 21:46