An Old Bridge And Some Pooh Sticks

When I was a child, one of six in our family, I lived in an old house which was surrounded by forest.  The only building within a mile was a two room school.  My dad was principal of that school and teacher to myself and two of my brothers.  We called him Sir at school and Dad at home and the two worlds never seemed to conflict.

This is my dad in his office.  Isn't he natty in his leisure suit? ~ 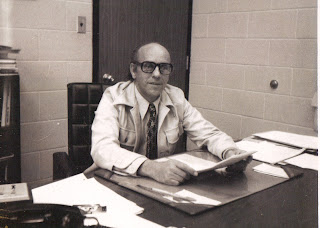 The winters in Northern Ontario are long and harsh and our ancient, black and white television was rarely in working condition.  So, we read books.  We read lots and lots of books!  My dad would read out loud to us in the evenings.  Mom would knit or mend and rock the baby to sleep.  The rest of us, from my high school age sister to my primary age brother, gathered around and listened.  I know this sounds impossibly like a Hallmark Christmas film, but it's honestly what we did!

A favourite book from that time was Winnie The Pooh by A.A. Milne.  I think it was pivotal in forming my understanding of human nature.  I would listen to someone and think, "What a gloomy Eeyore" or "Don't be such a nervous Piglet"!  I've met many an Owl that thought they were more clever than they were and loads officious Rabbits.  At times, I have been all of these things myself.  I've even known a lovable Christopher Robin, for Christopher was the name of that well loved baby my mom was rocking to sleep.

I revisited Pooh and all the characters of the Hundred Acre Wood when I read The Tao of Pooh by Benjamin Hoff.  He describes Pooh as a Taoist Master, venerable philosopher and great teacher of effortless, calm and reflective living.  He quotes from the original book and is just as funny in his analogies. 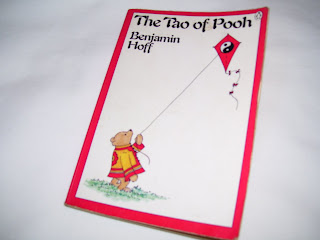 As you can see the book is becoming a little dog eared as it has moved from a delightful read to something of a self help reference book in my library.  Hoff reminds me not to,  "Think too much and care too little."  and says, "...that mistake cannot continue for much longer if everything is going to survive.".

I walk back to this lovely old bridge and remember my daughters playing Pooh sticks here many years ago.  Remember the game of tossing sticks in the water on one side and waiting to see who's stick comes out first on the other?  I'll share that image with you and we'll all have a Pooh style do nothing moment! 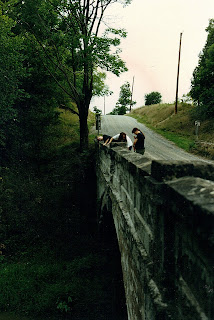