Does Your Stuff Own You?

That sad part is, as a professional stager, it was my job to go into someones home and pry their junk away from them so the house looked nice enough to sell for the best possible price.

All my bookcases aren't enough to avoid these stacks of books on the floor. ~ 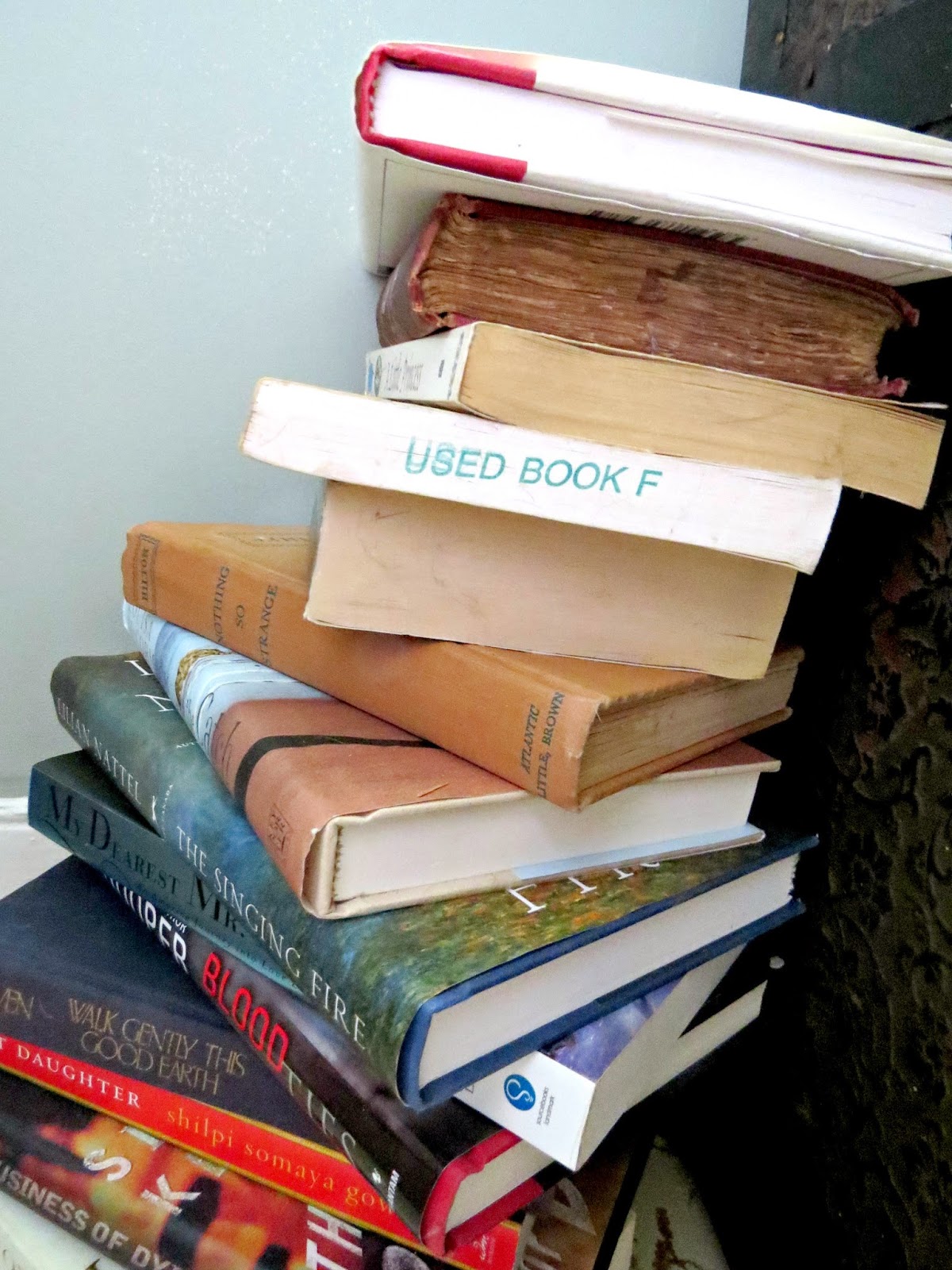 I know all the psychology of helping someone let go of things that are weighing them down and making their life more difficult.  Yet, in my own situation, I don't stop and think about how difficult it is to run a vac over a floor that has books stacked on it.

What I like to call a craft room has become unusable for anything other than hiding stuff.

Fabric spills out of shelving units ~ 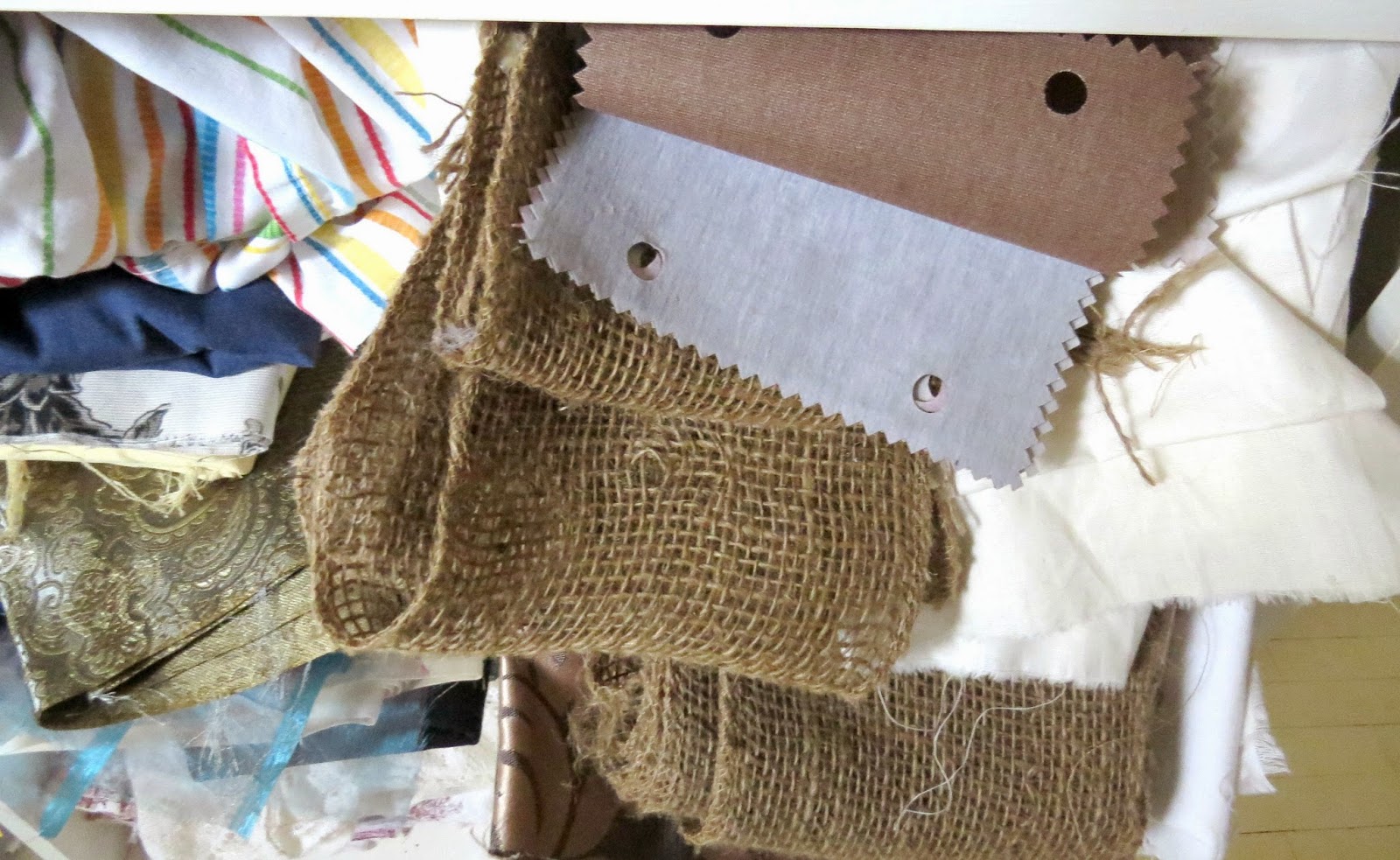 and can't be made into anything because the sewing table is piled high with stuff. ~ 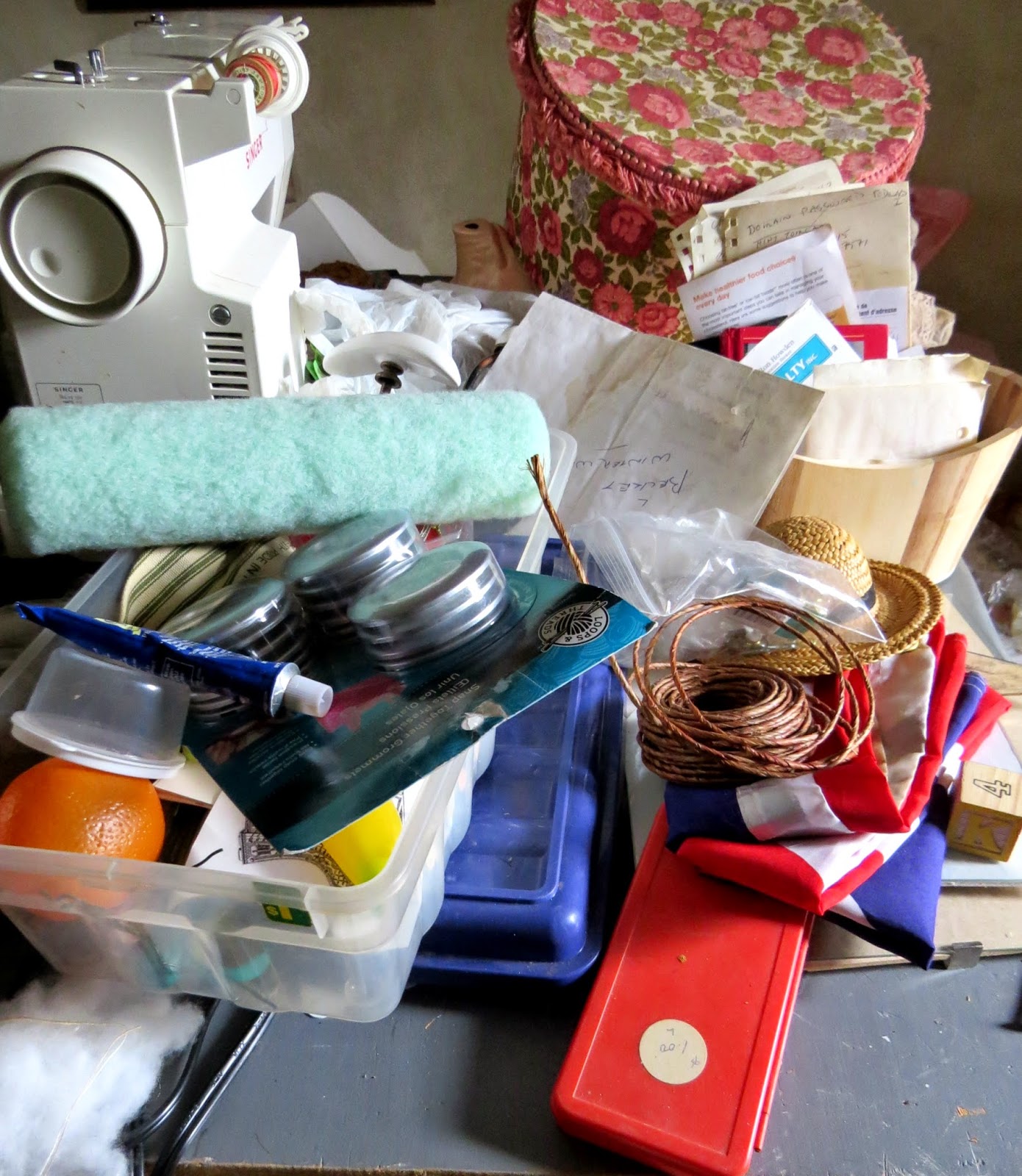 When the table is full, just pile it on the floor. ~ 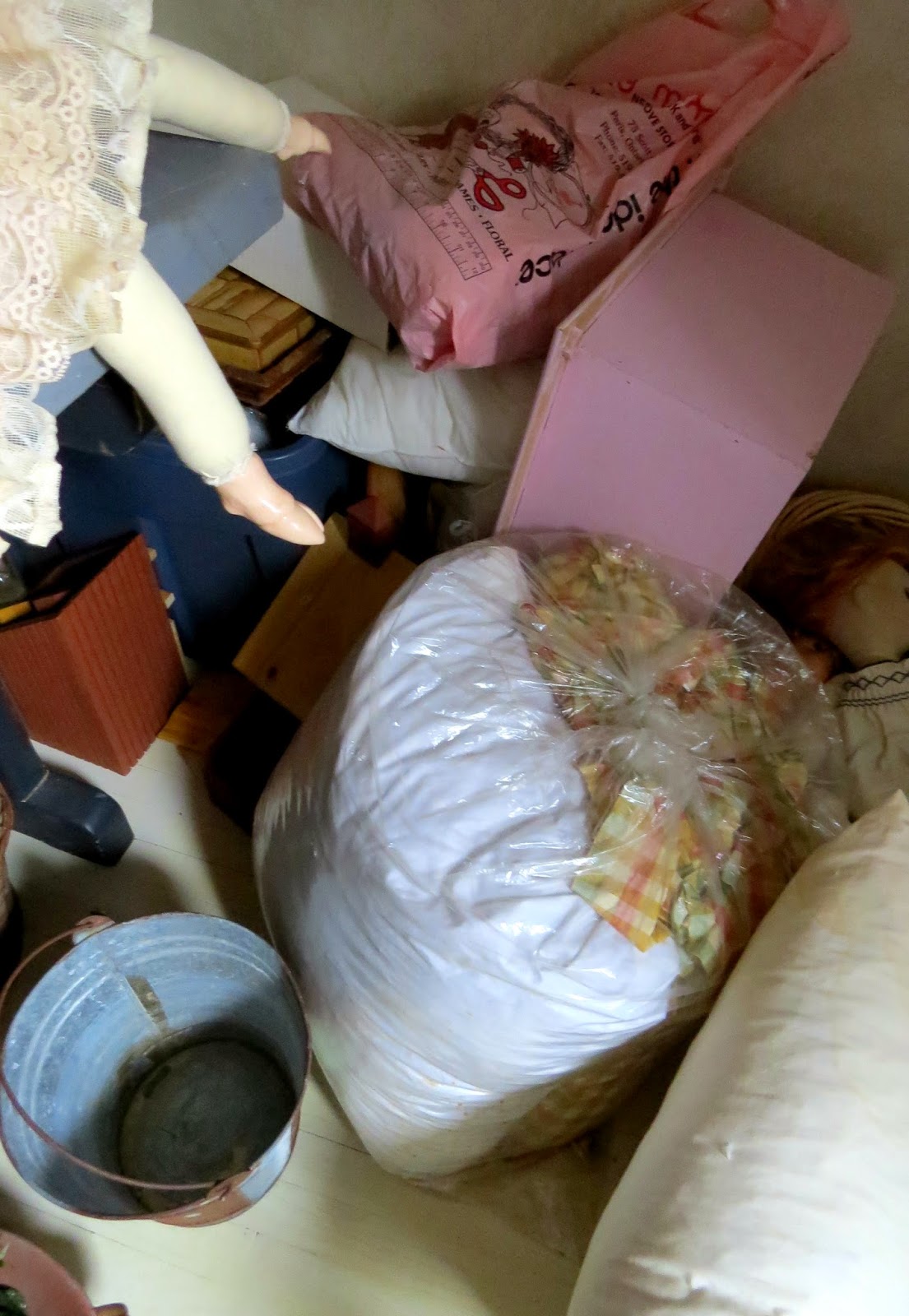 It wears me out.  It makes everything more difficult, if not impossible, in all this mess.

I tackled my bedroom first and it felt so light and airy with all the clutter removed that I was inspired to make this craft room usable.  It's not finished, but two days of hard work have made an amazing difference and there is light at the end of the tunnel.

All the time I worked, I thought of the difficulty in balancing sentiment and practicality.  You can't keep every single thing that meant something to you in the past.  Some of the kids art work has to go, right along with the birthday cards, fabric scraps and almost empty spools of thread.  Some things need to be passed on to someone who can use them, too.  My sister called and told me she was going shopping. When I asked her where, she said, "Your house.  I need a lamp and an end table and you have all kinds of them stored over there."  True enough.  I could give her a choice of four lamps and as many end tables.  It was a relief to see it gone!

I also thought of a young fellow that worked for me at my recording studio in the 80's.  He seemed to have no attachment to material possessions.  He lived in a single, rented room in someones house, didn't own a car and kept everything he absolutely needed to function, in the army surplus backpack he carried everywhere with him. 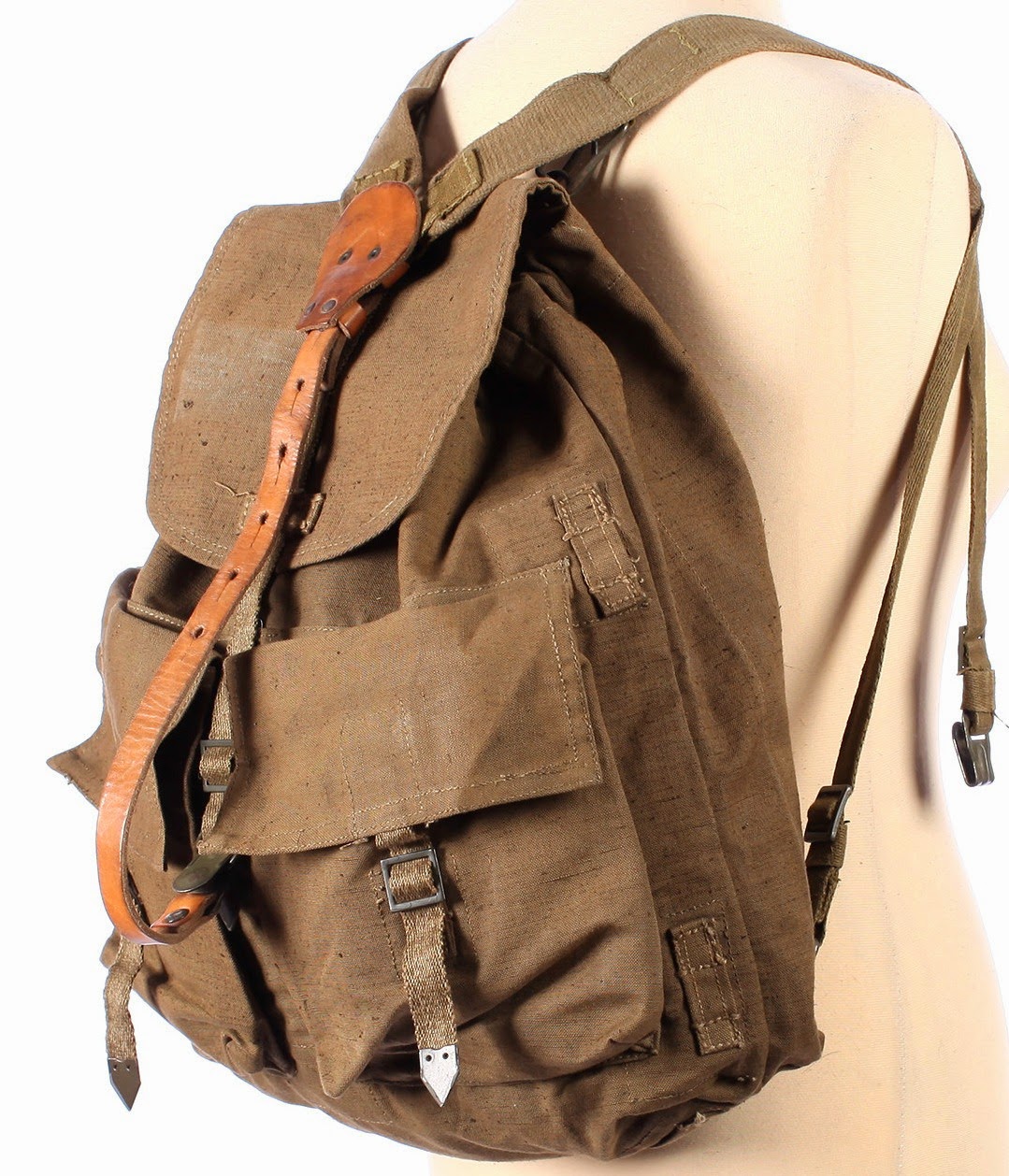 I never saw the slightest hint of jealousy or competitive behaviour in him and he was helpful to everyone he worked with.  He cared deeply about the music he worked on and was the ideal assistant engineer.  Money was never an issue with him.  He didn't really need much.  Time wasn't a problem either.  No matter how late the session ran, he kept right on working and was happy to catch a nap on the couch in the lounge before the next session started.  After all, he had all his stuff in that knapsack and he could be right at home no matter where he was.

He became a recording engineer and was so well respected that a world famous engineer invited him to work as second engineer on a very prestigious album being recorded in England.  It was a simple thing for him to pick up that knapsack and cross the Atlantic.  I would see him when he came home to visit his mom and he never changed a bit.  I think it was still the same grey wool coat he wore and I'm sure it was the same knapsack that came back with him every time.

In a few years he rose to the top of his field and moved on to producing albums that were critically acclaimed and earned him an enormous annual salary.  He bought a flat in an expensive London neighbourhood and had it professionally done up.  He deserved the success that he had earned without ever hurting anyone to get there.

One day he had a call from a musician in Africa, asking if he would come and work on an album with him. Today, this musician is considered a pioneer of modern world music.  But, as popular as he was in Africa, the budget for making an album was very small.  My friend admired the musician and was a fan of his sound but he couldn't walk away from offers of millions to earn a few thousand. He turned the project down.

That night, he came home to his flat and stood there looking at all his stuff.  He picked up the phone and started calling everyone he knew.  Did they want anything?  A stereo system, couch, artwork, dishes?  He gave all of it away.  Every single thing!  He called a real estate agent and told her to put the flat up for sale immediately at a price that would ensure it sold quickly.

His last call was to the African musician to tell him he would be on the next plane and ready to work as soon as he arrived.

"No, don't worry about getting me a place to stay.  If there is a couch and a shower available at the studio, I'll have everything else I need with me.", he said.

His stuff wasn't owning him anymore.

It all fit in here and was ready to go wherever his heart led. ~

Isn't there a little part of us all that wishes we were him?

I think I can let go of quite a few more things and maybe my heart will sigh a big sigh of relief!