My Own Bit Of Ireland

I may have spoken a tad too soon about springs arrival.  Another foot of snow has fallen and the wind wailed around the house.  It was the perfect time for my furnace to conk out!  While I waited for the repairman to come, there was no better time to create a bit of the Emerald Isle and will myself far away from a Canadian winter. 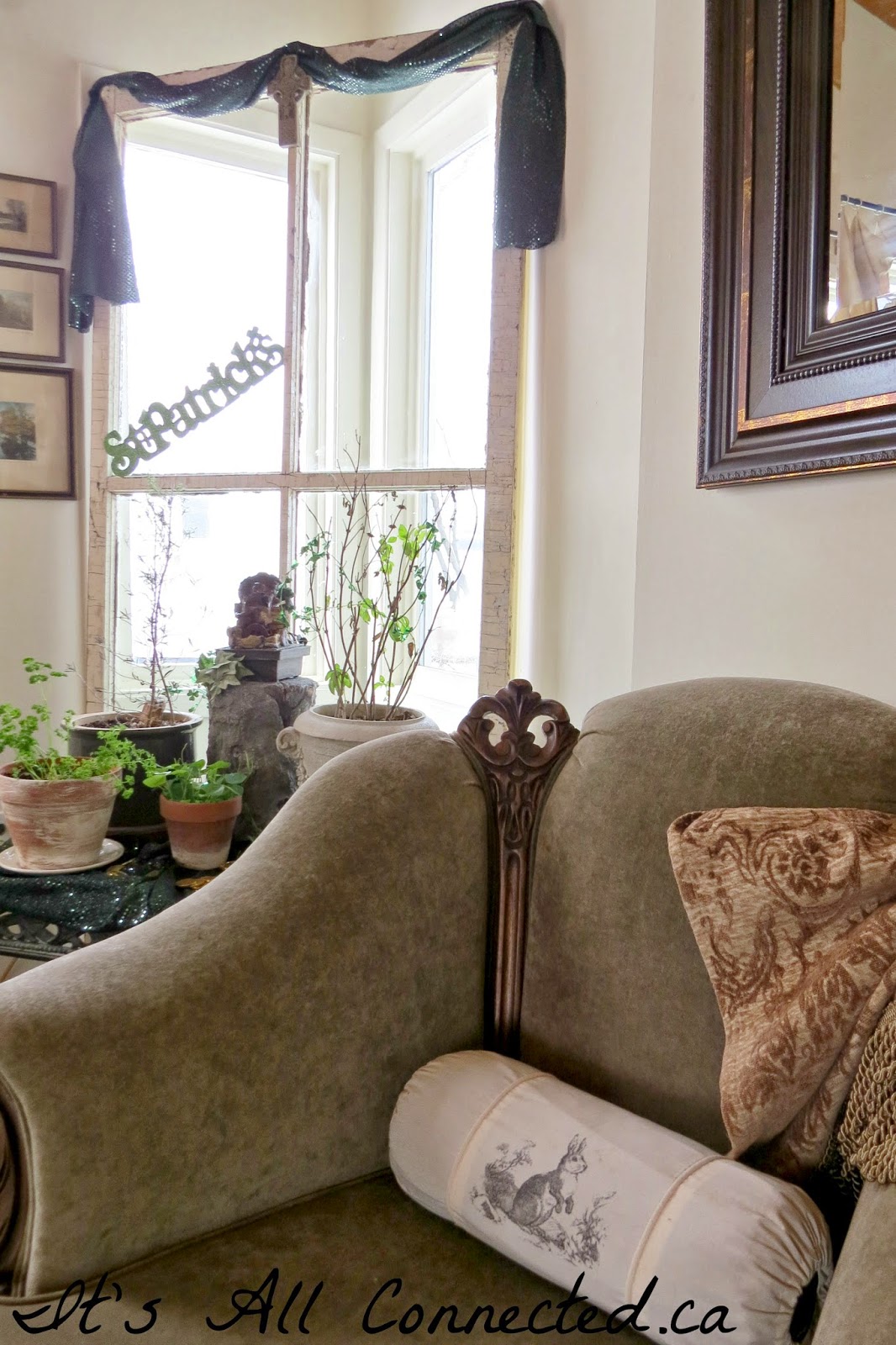 I had in mind a bit of Irish countryside and the table in front of the old, chippy door has a bit of greenery on it already.  The herbs are in a sorry state by this time of year but I'm not giving up on them yet!

This is the rosemary I was growing to shape into a Christmas tree.  I think it's coming along quite well, don't you?  Why did I even attempt that when I was a dismal failure with a bonsai? ~ 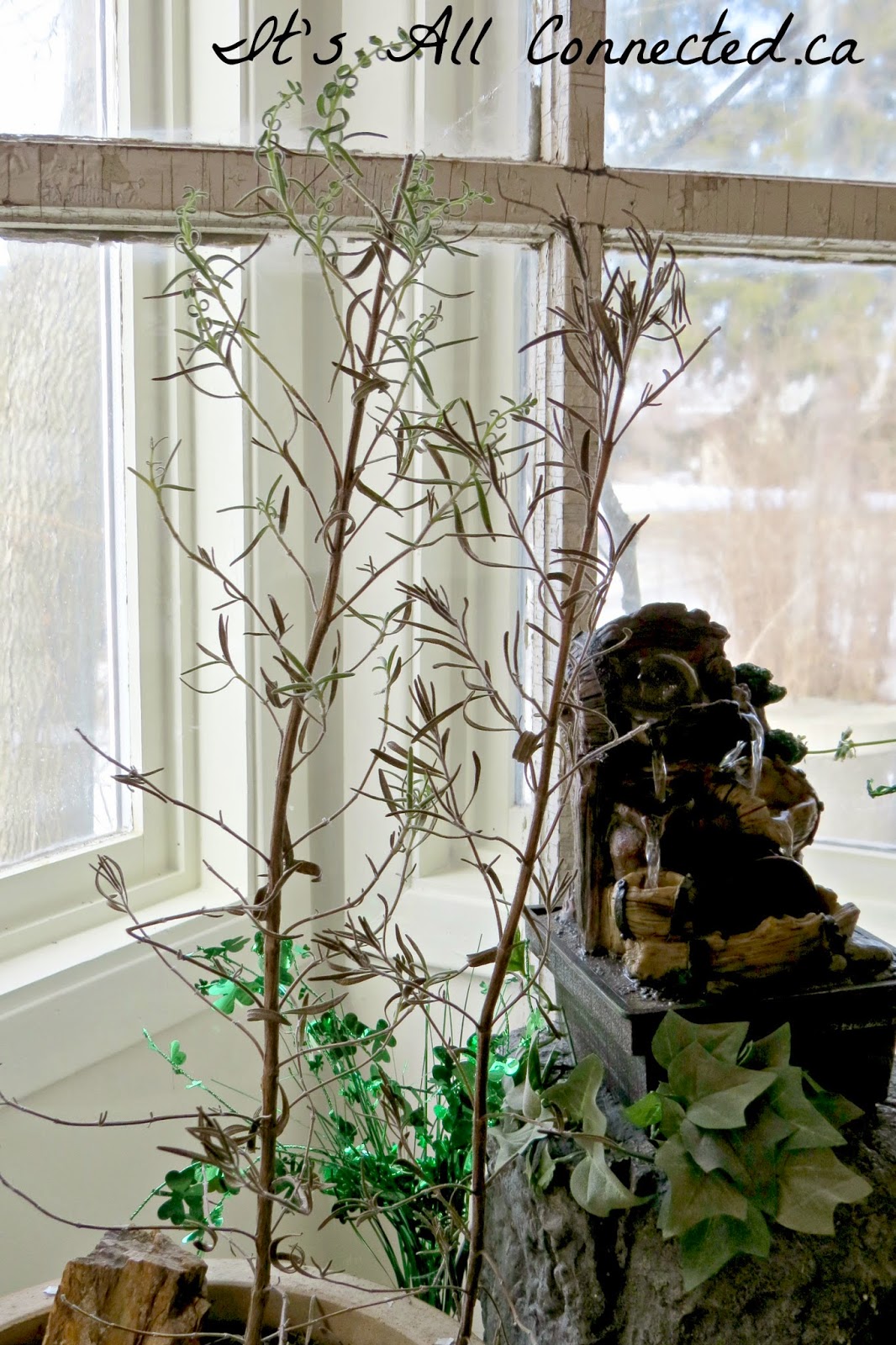 The basil will stay until there isn't a single leaf left to pick. ~ 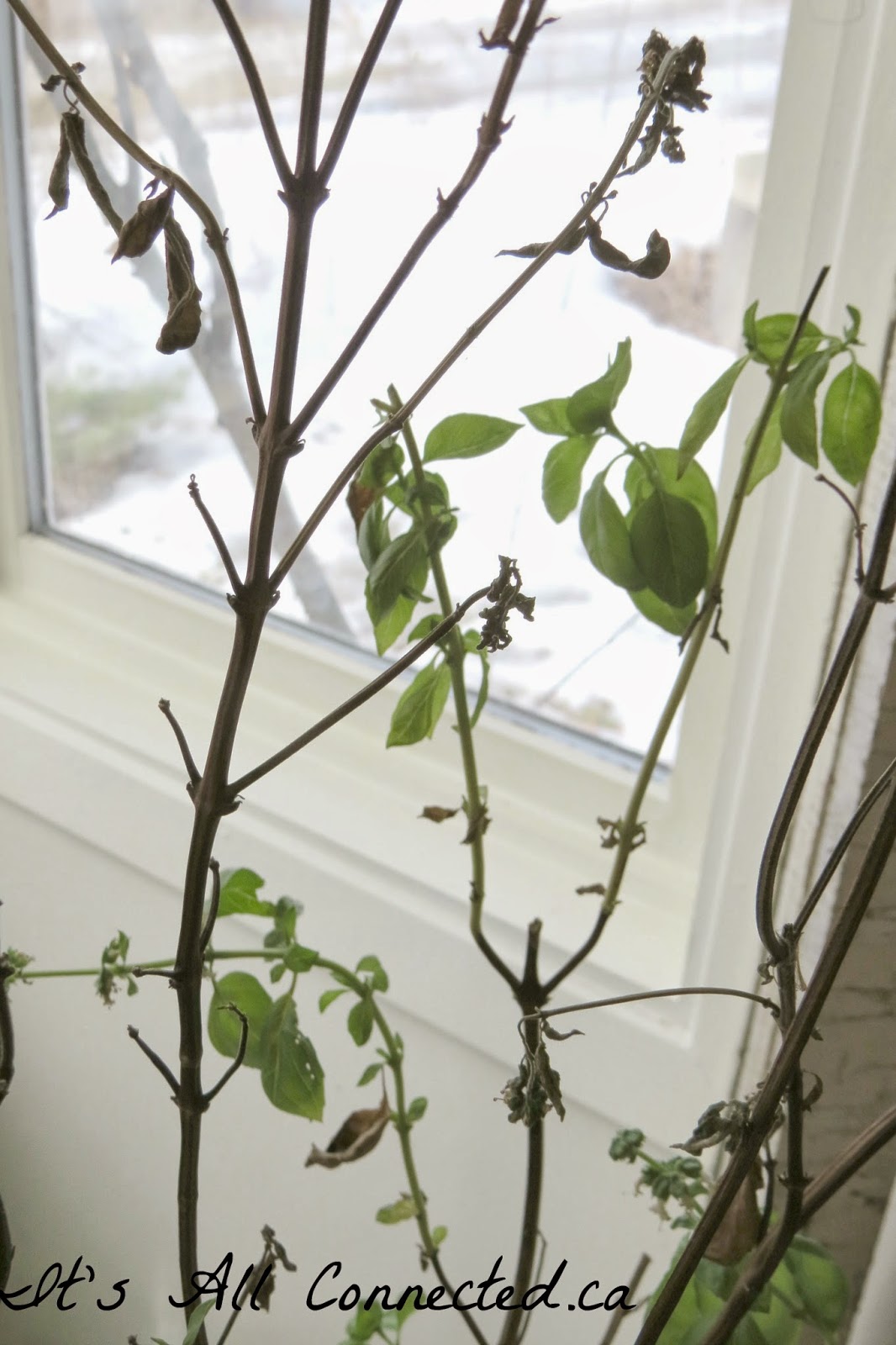 Let's pretend they are trees and build from there.  Green sequined fabric for grass, some coins for good luck and green candles that I can't light unless I stand guard over them, or I'll have barbarian cats on fire! ~ 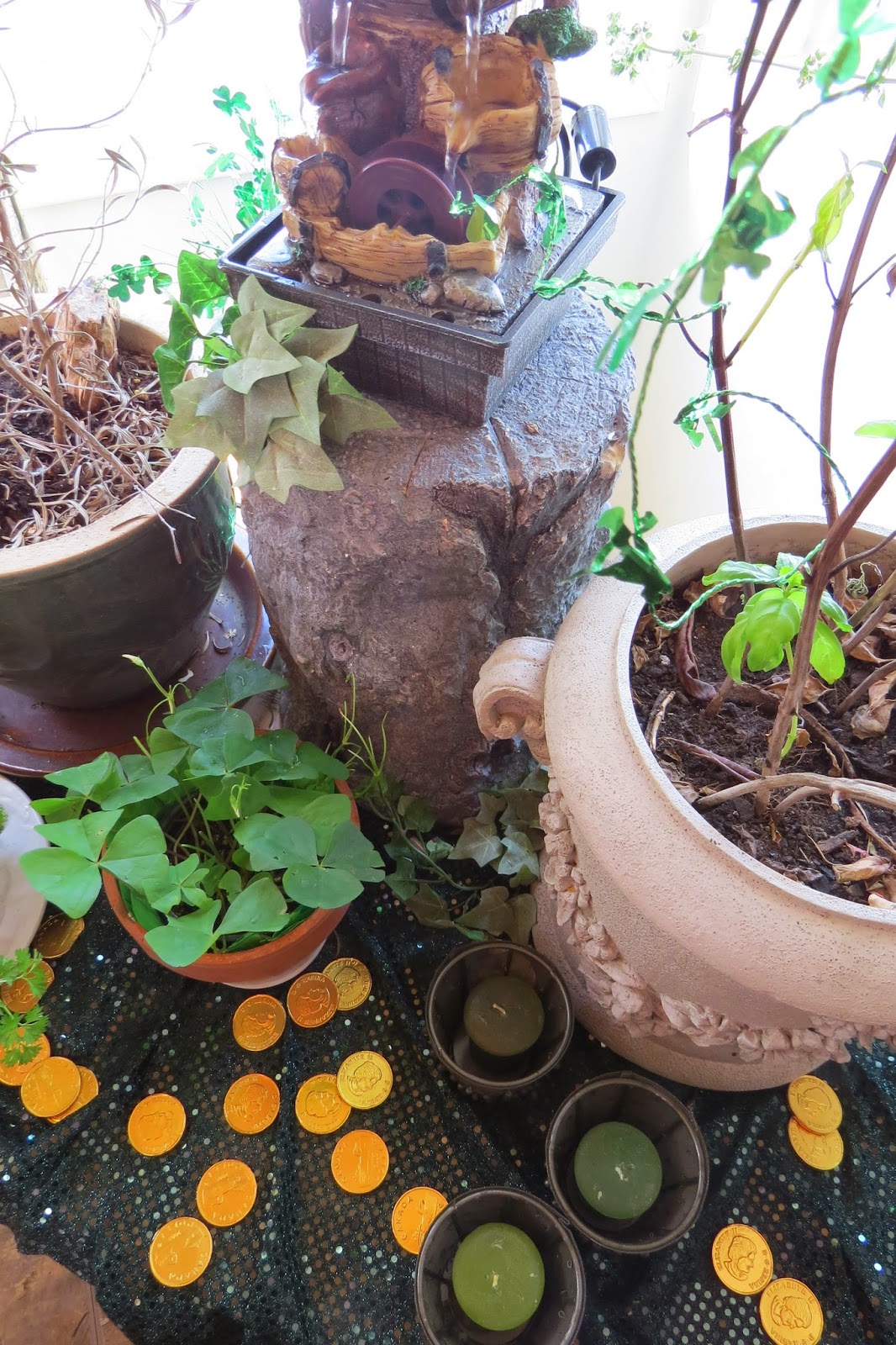 I've a new shamrock.  They ate the 20+ year old one and then knocked it over repeatedly to make sure it was dead.  I am determined never to become attached to a plant again.  Or, harbour deranged cats!

I told my sister I was looking for a cheap fountain and she found me this sweetie for $2 at a thrift shop. ~ 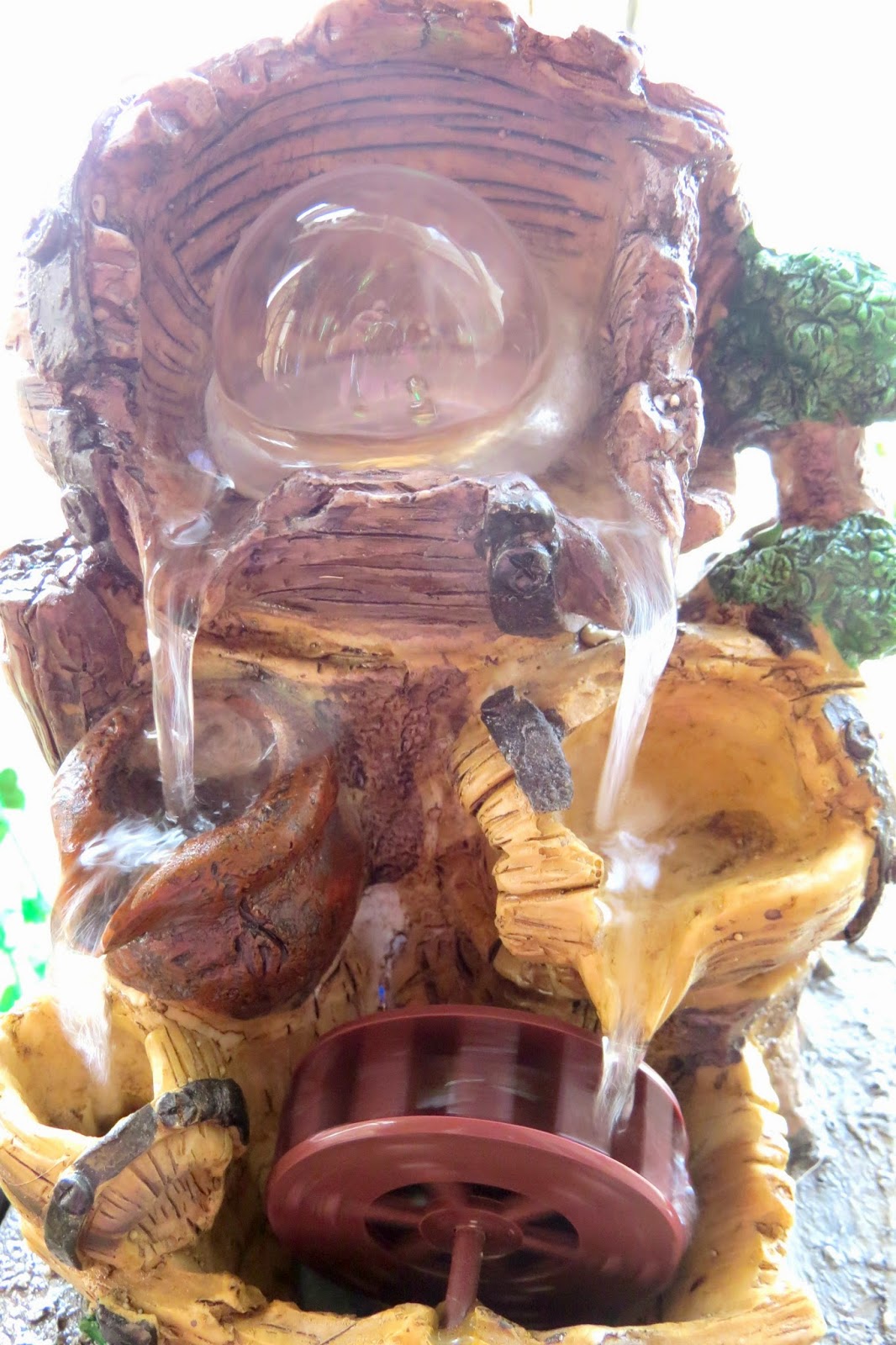 The crystal ball spins on the water and turns colour.  The little mill wheel fits in perfectly with my family story.  We came to Canada by rather odd means.  My great, great grandmother, Susan O'Neill, was the niece of the lord of the castle.  She was protestant.  Somehow or other, she wound up marrying a Catholic priest.  Say what!  Her family bought him a flour mill.  Obviously a change of career was in order for him. They had my great grandmother while still in Ireland.  With famine still ravaging their homeland, they decided to sell the mill and move to Canada where they bought a farm and he became a circuit minister.  I have a weird family.  It's a miracle I turned out so normal!

I thought the barbarians would be a problem around the fountain but they seemed to be afraid of the sound of the pump and stayed away from it for a whole week.

Then, Clara Jane remembered that she is obsessed with water.  It's impossible for me to brush my teeth without spitting toothpaste onto the cat that is batting at the water.  She's fallen into the tub with me at least four times while I've been taking a soothing bath.

So, Cara Jane the Irish barbarian, decided to check this thing out. ~ 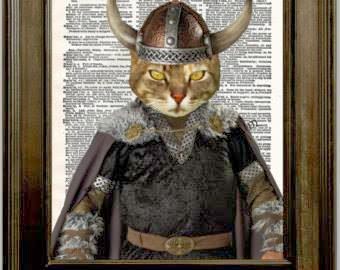 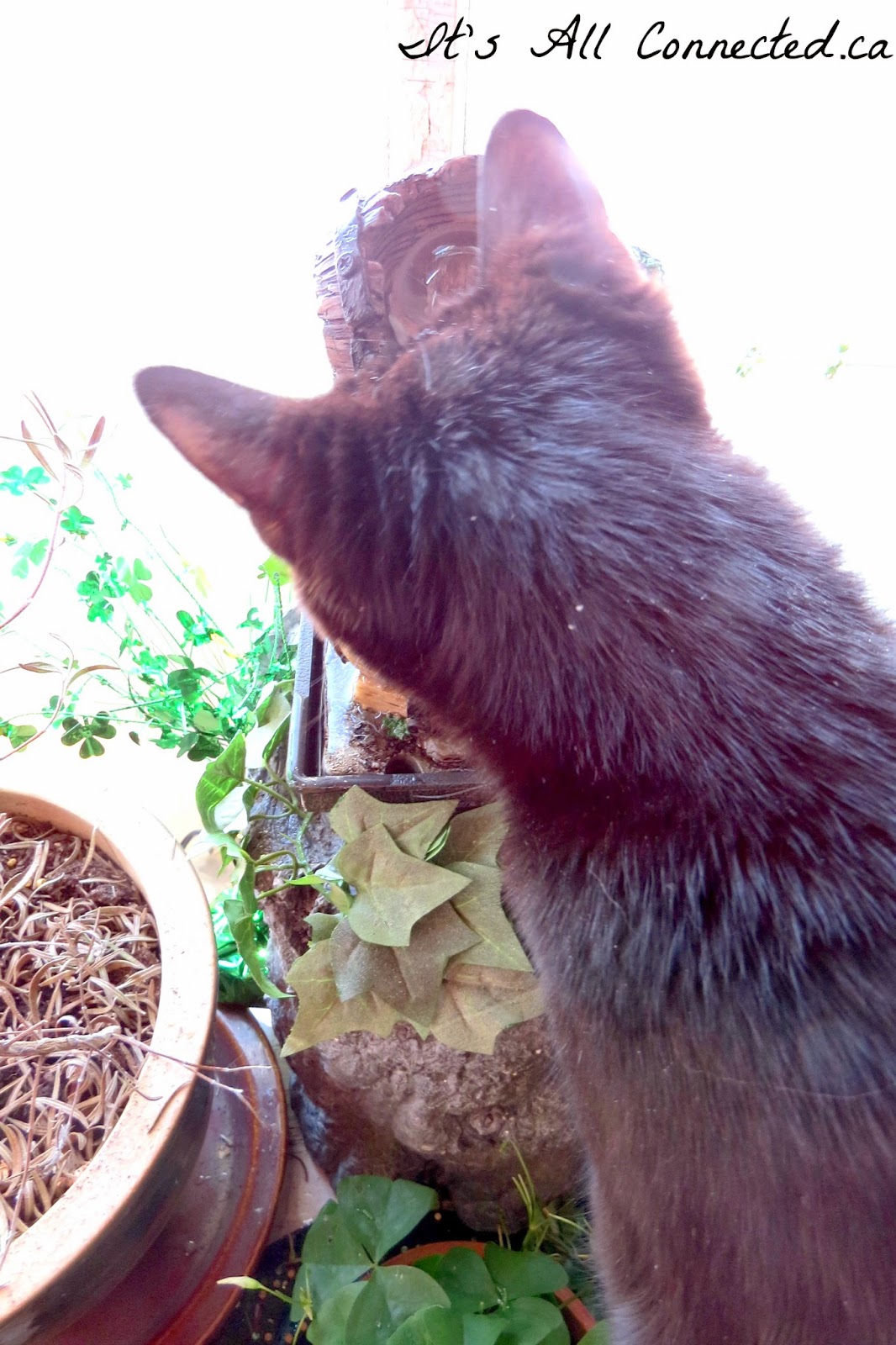 Batting at that crystal ball and sending water flying everywhere is tons of fun!

Thank heavens she can't reach the Celtic cross hung at the top of the door.  At least I don't think she can. ~ 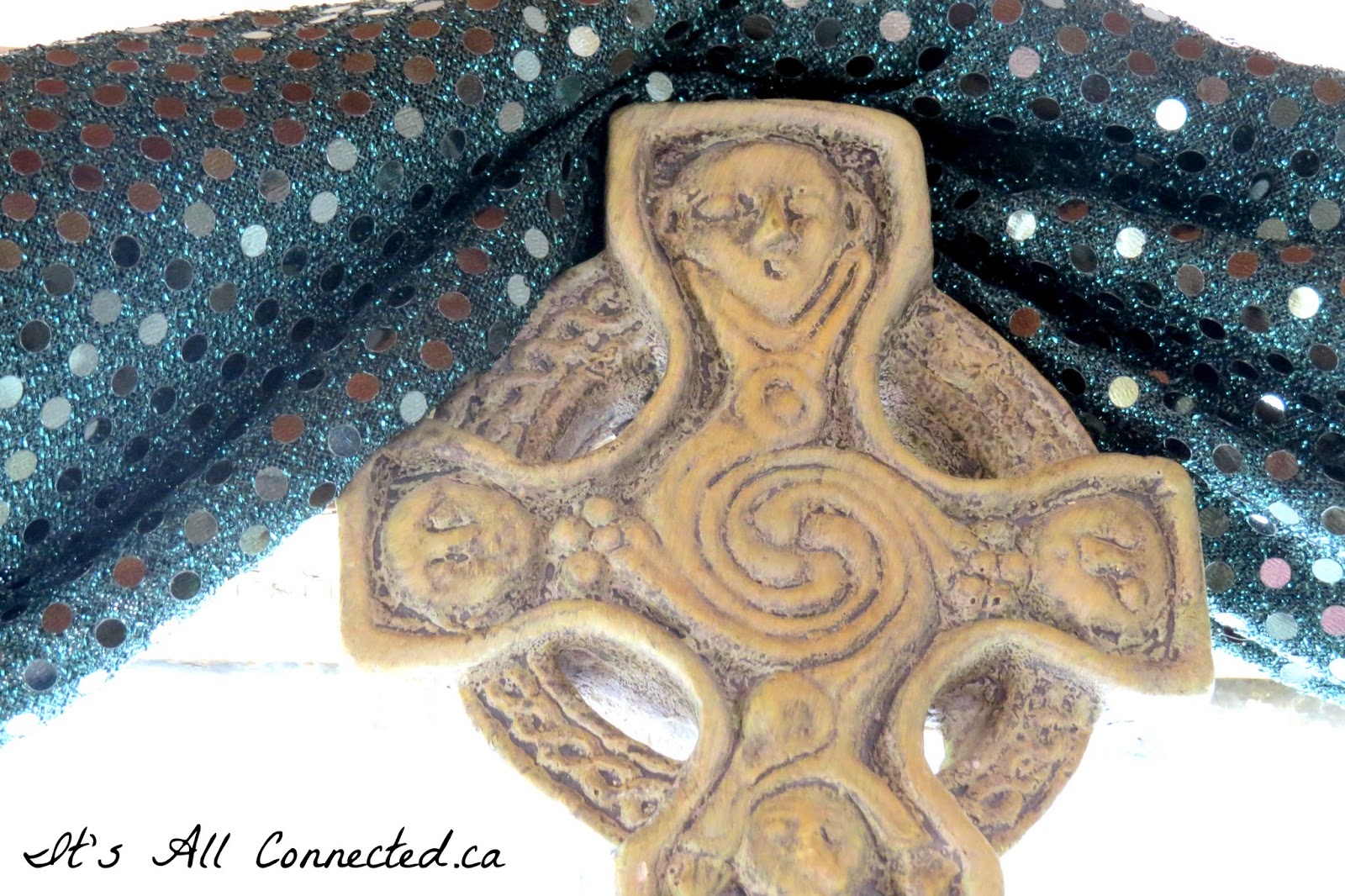 At night, I can imagine myself far away, nursing a glass of Bushmill's and listening to water flow through that mill from so long ago. ~ 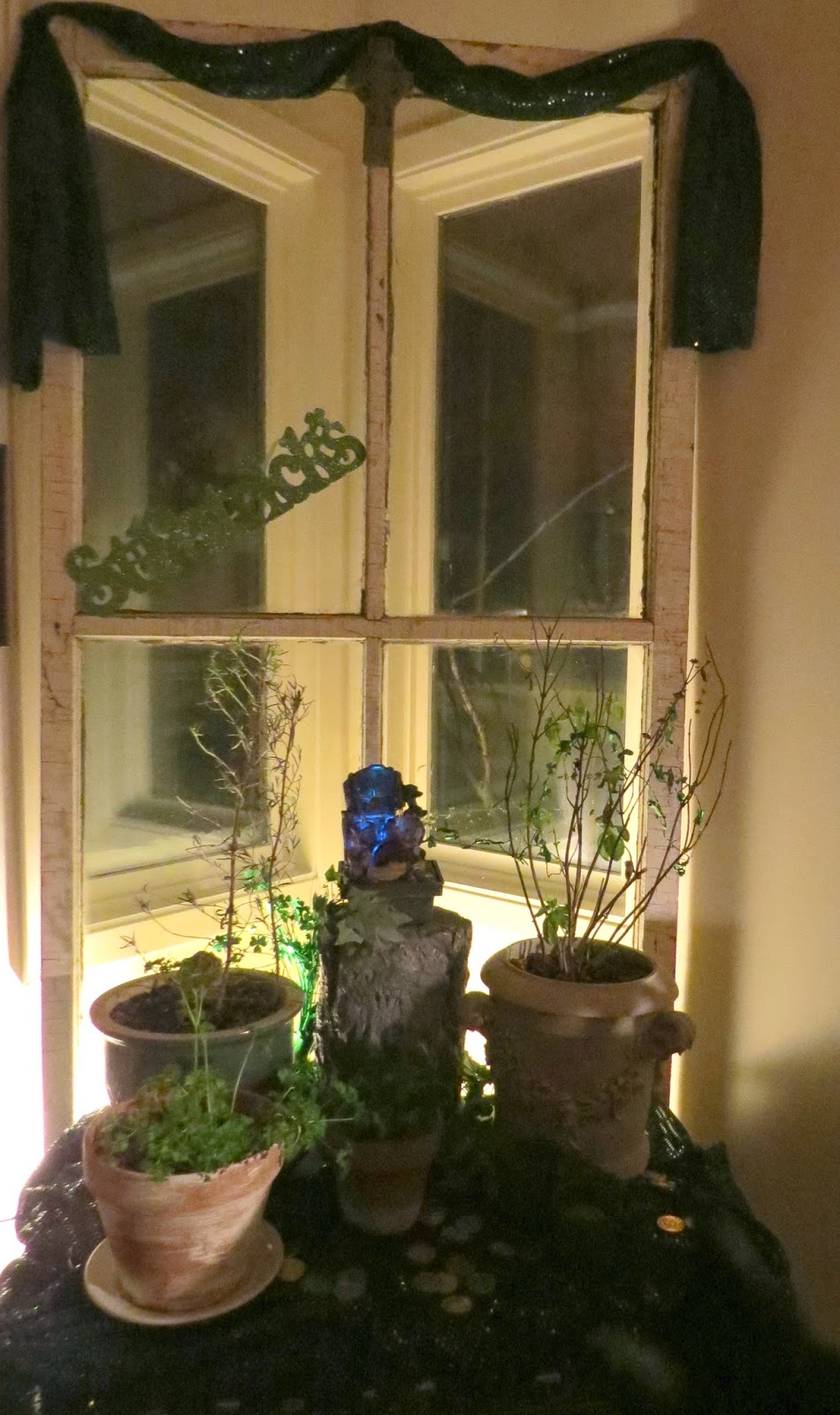 And, if she's sleepy enough Clara Jane will leave the magic orb alone. ~ 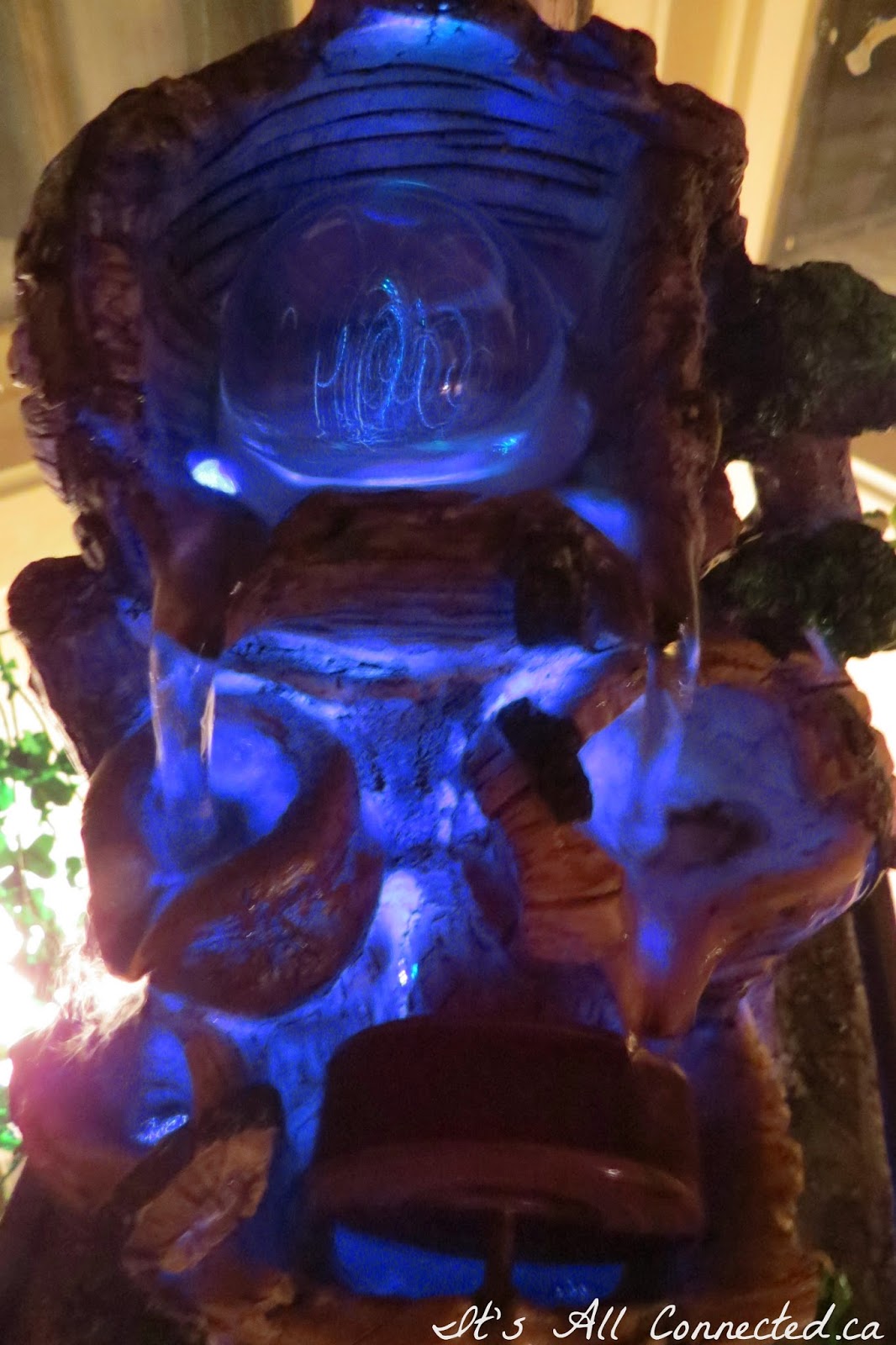 If all of that leaves anyone in doubt of my heritage, the little shelf in the library has the family banner that declares this the 'Land Of The O'Neills'.  The spelter urns, Beleek basket weaver and china angel are all from Ireland and I think my ancestors will be looking down with a smile. 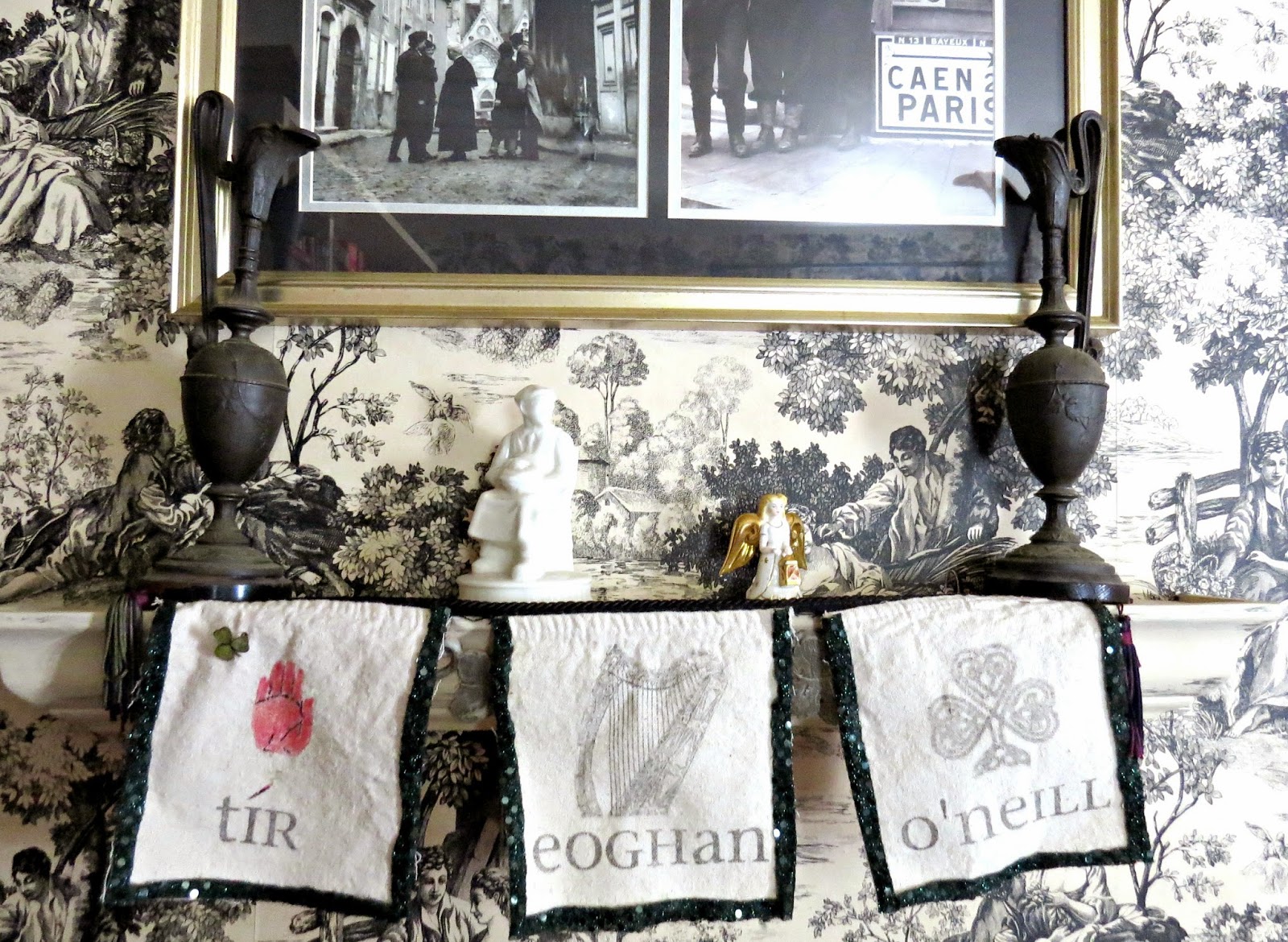 Happy St. Patrick's Day and may you have more luck than the Irish have ever been known to have!
Posted by Maureen Wyatt at 16:54