A couple of miles down the road from my house is the Chiefswood National Historic site. ~ 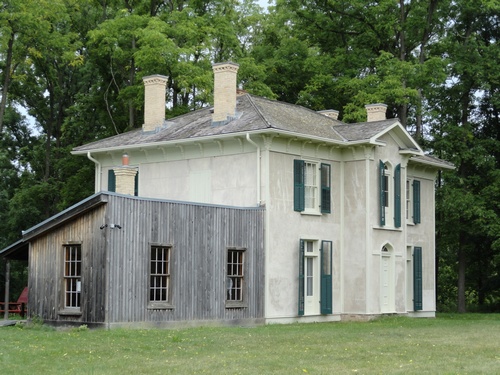 This is the birthplace of E. Pauline Johnson, famed Canadian poet and recitalist.  The modest, Georgian mansion was built in the 1850's as a wedding gift by her father, George Johnson, to his bride, Emily Howell.

I believe it was the love story of George and Emily that made it possible for Pauline to bring unfamiliar worlds together in understanding and beauty.

I'm entranced with the tale.  George Johnson was the son of a Mohawk Chief.  His mother was a hereditary clan mother, with the sole right to choose one male from her line to be one of the chiefs of Six Nations Confederacy.  George was given a formal education and showed a gift for languages, speaking all six Mohawk languages, English, French and German.  He became an interpreter for the Anglican Church ministry on Six Nations territory.

Emily Howell was the daughter of an Englishman, who brought his family to Ohio and started a number of schools.  He is reputed to have been a man of contradictions;  ardent supporter and instrumental in the establishment of the Underground Railway, aiding slaves escaping to freedom.  He was also a cruel and abusive parent.  Emily's sister married the Anglican minister in charge of the mission at Six Nations and rescued her little sister from the parental home, bringing her to Canada.

The interpreter, young George, lived in the mission house with them as part of the family.  He was clever and refined, handsome and athletic.  Emily was a pretty, shy girl and had the perfect manners of a British lady.  The young couple became fast friends from the start and love followed.

This was shocking to local society and both families.  The match was vehemently opposed on all sides.  Mixed marriages were not acceptable.  George's children would be mixed blood and he would be giving up all rights of one becoming a chief.  His mother was appalled.  Emily's family, for all their abolitionist views, would not accept a marriage with a man of colour.

The couple dated secretly for five years.  George was, by then, an official government interpreter, a chief of the Confederacy and an important liaison between Six Nations and the government.  Wealthy enough to build  a fine house for his lady, the couple announced their intention to marry and defied all social convention.

They determined to make both cultures equal in their home.  Victorian style furniture had traditional native motif carvings.

The intricate porcupine quill top on this table was done by Emily herself. ~ 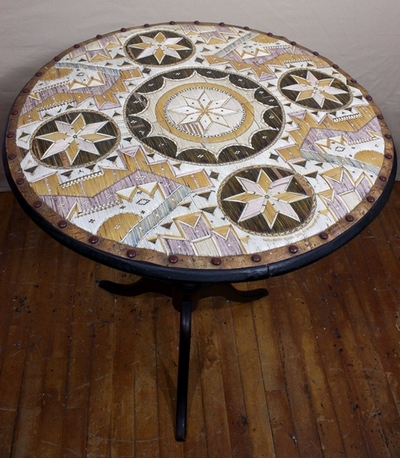 The house has identical front and back doors to greet those that came by canoe, on the Grand River that flows behind the house, and those who came by horse and carriage, on the road that ran from the white settlements, as equally important guests.

Those guests eventually included chiefs, governor generals, lords and ladies, Alexander Graham Bell, artists, Prince Arthur and Princess Louise.  Everyone who was anyone came and everyone remarked on the refined living style of George, Emily and their four children.  All were fascinated with the blend of cultures.

The children were taught to be proud of their heritage and E. Pauline Johnson thrilled her audiences as she recited her poetry and read from her books wearing first this costume ~ 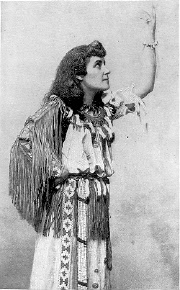 and then finished the concert in evening dress. ~ 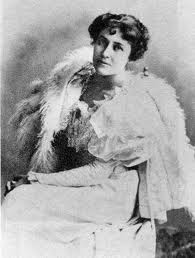 George worked tirelessly to facilitate understanding between natives and whites.  He was also insistent that the illegal trade in liquor, by a gang of white thugs, be stopped and the illegal lumbering of prime timber by white businessmen, with consent of a sector of natives for their personal profit, cease on reserve lands.  He had the culprits arrested and fined.  The liquor dealers waylaid him one night and beat him so severely that he was unconscious for five weeks.  He recovered and went right back to rooting out the lawlessness in his territory.  The lumber men attacked him next.  They beat him, fracturing two ribs and a finger, shot him and left him for dead.  Again, he recovered.

Public outrage at this second attack was universal.  White and native people came together to take up the cause.  They drove out the liquor dealers and the lumbermen withdrew under public pressure.

Someone had shown them the better way.  George and Emily had lived a life of love and respect, walked right over the barriers to their happiness, raised four fine children, given Canada a national treasure in Pauline and brought together two cultures to battle for decency.

Every Canadian has read 'The Song My Paddle Sings', by E. Pauline Johnson.  My favourite lines are at the end.  I can paddle a canoe from the back of my house, right up to George and Emily's river door. ~