The Ultimate In Thrifty Decor!

I know I said my front porch was entirely done with thrifted items, but I think the side porch is the ultimate in thrift, gift, reworked and found!

You see, the porch itself is a found object.  I set out to repair a broken step on the porch.  When I removed it, the boards underneath were rotten, so I removed them as well.  By the time I finished removing all the rotted boards, I had - ummmm - NO PORCH LEFT!  This is not a good thing.

As it happens, my neighbour was replacing his porch with a deck and gifted me with it.  A couple of guys carried it over to my place and there it sat, on it's side, for a year. That's attractive and oh so useful! This summer, I hired a couple of teenage guys to lay patio stones I pulled up when the landscaping was done in the back and move the porch into place on top of them.  It's set on deck post blocks that my BIL gave me when he pulled his deck off.

A couple of coats of white paint, some stencilled house numbers and Kellswater painted on the top step and she doesn't look too bad! ~ 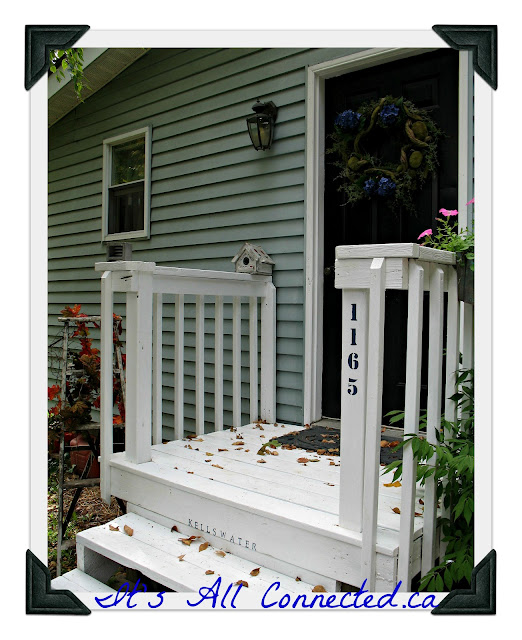 Then, I was given a very ugly, old window box. ~ 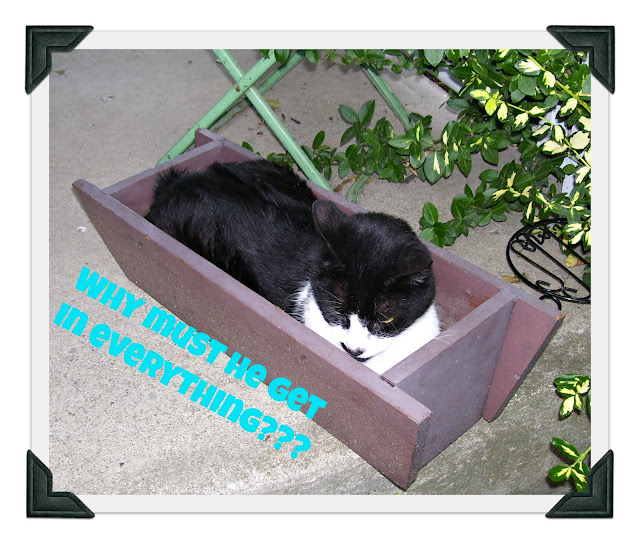 Haul out the paints to give it a weathered look and draw some lines on to simulate boards with a permanent marker and it's not half bad.  Even the cascade petunias were gifted as seedlings! ~ 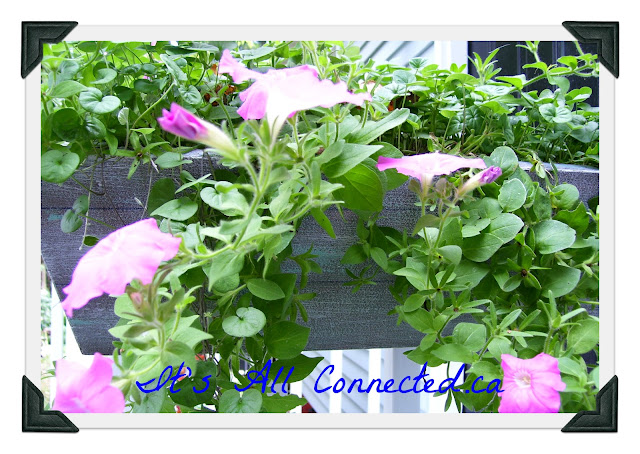 To switch it out for Thanksgiving was about a 10 minute effort.  The old, wooden ladder was salvaged from my Dad's garage and held planters of watercress all summer.  I love the layers of paint and plaster that show how well this ladder was used!  I strung some dollar store garland, faux grapes and grapevine on it to celebrate the season. ~ 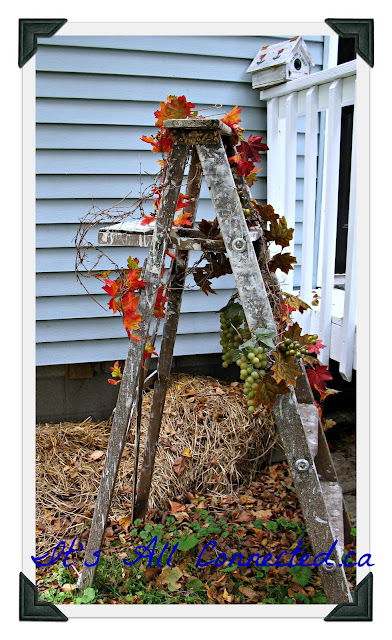 I've had this wreath for several years and added some blue, silk hydrangeas to it for summer. ~ 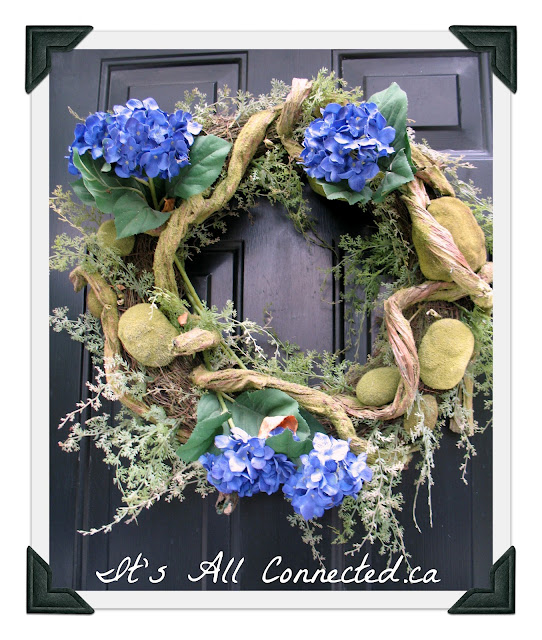 The simple switch was made with four bunches of silk leaves, from the dollar store, that I already had on hand. ~ 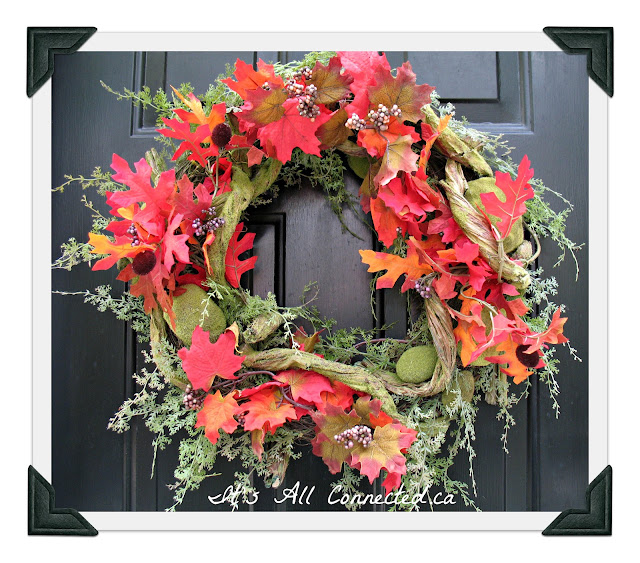 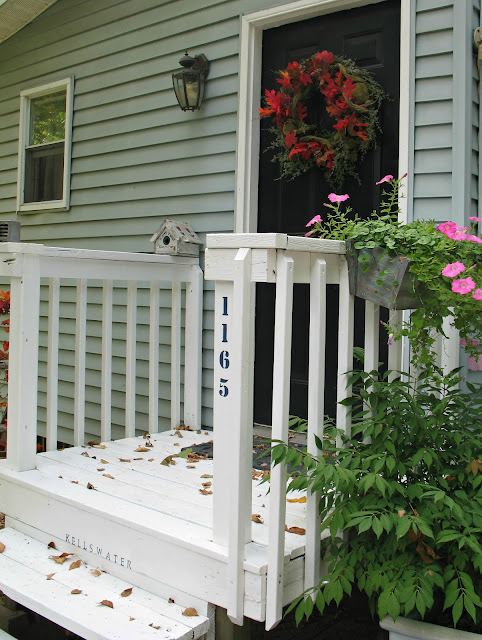 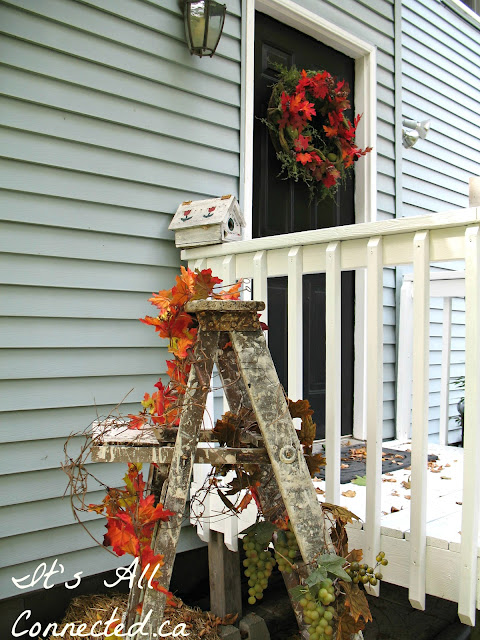 Total cost for porch and decorations = $0.  I did pay the guys $60 to install the porch and bought two quarts of white paint to spruce her up.

The porch looks over the hosta bed I planted from the ones my sister pulled out of her gardens. ~ 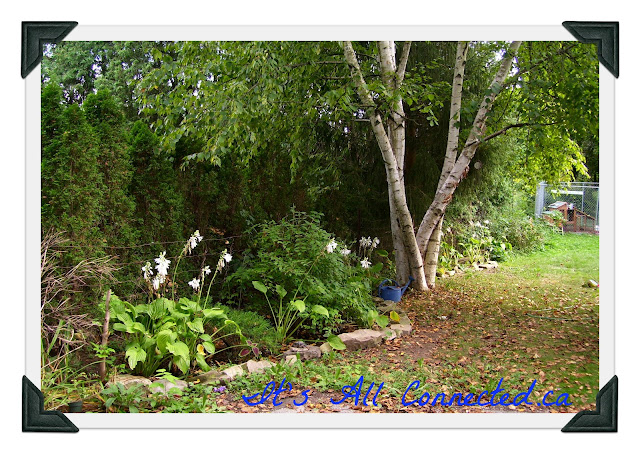 You must admit this is the ultimate in thrift, gift, reworked and found and that I have stayed true to the commitment to it that I made last summer!  Feel free to clap and shout Bravo as I take my bow!

Email ThisBlogThis!Share to TwitterShare to FacebookShare to Pinterest
Labels: Fall Decorating, The Yard