Once again I have confirmed my cat's opinion that I am the densest thing living in this house.  Dogs don't do that.  Dogs think you are a veritable genius for being able to open fridges and drive cars!  Cats have a whole different set of criteria for intelligence.

Today, I gave this guy a kiss goodbye when I left the house. ~ 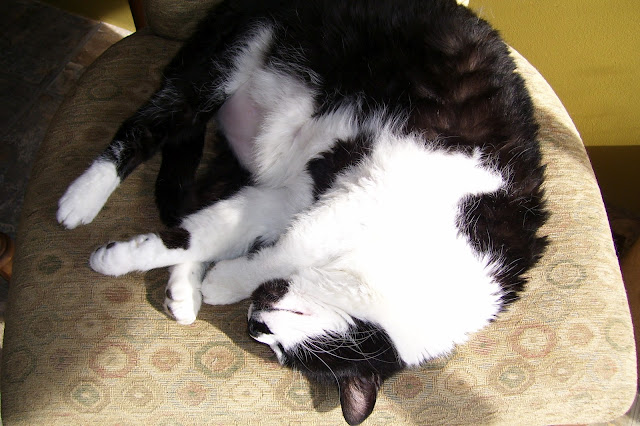 He didn't move.  Not a twitch.  I called his name. Nothing.  Oh, my gosh, he's dead!  I did the only thing you can do with a dead cat and called his name louder and shook him.  He gave me a look that said, "Why would you wake me from such a good nap in that brutal way?".  Oops!  Hey, he's over 20 years old and I can't detect life in an animal that lies there like a stone!

That doesn't make me stupid does it?  Oh no.  I'm wise to their tricks.  I know they won't come when I call, if they don't feel like it.  I know they think I'm an idiot because I can't see where they are.  But, I've learned to look in the direction the other cats are looking, as they shake their heads in dismay, over my poor sense of vision, hearing and smell.  Aha, there you are!

I don't try to race this girl to the top of the stairs anymore.  She thinks I'm the slowest thing on the planet and even has time to pull most of the peacock feathers out of the vase before I get there!   If she's feeling really saucy, she'll teeter along the top rail to watch me hold my breath.~ 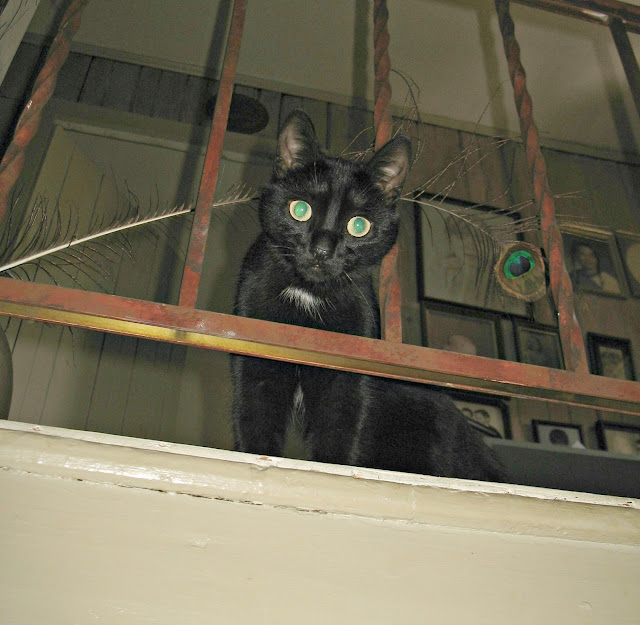 They've no idea how I expect them to use this thing for anything other than a bed. ~ 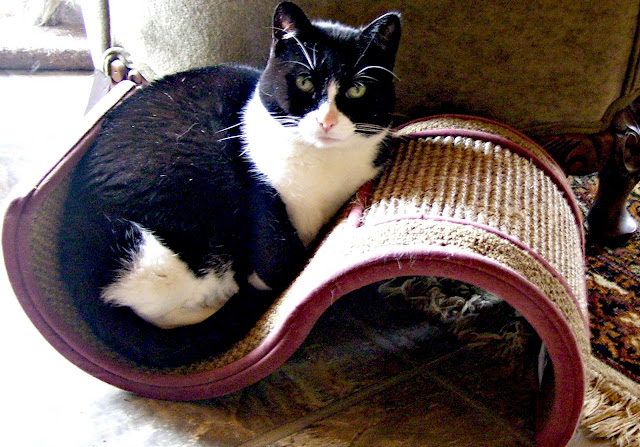 There's a perfectly good tongue and groove board wall upstairs to use for sharpening claws. ~ 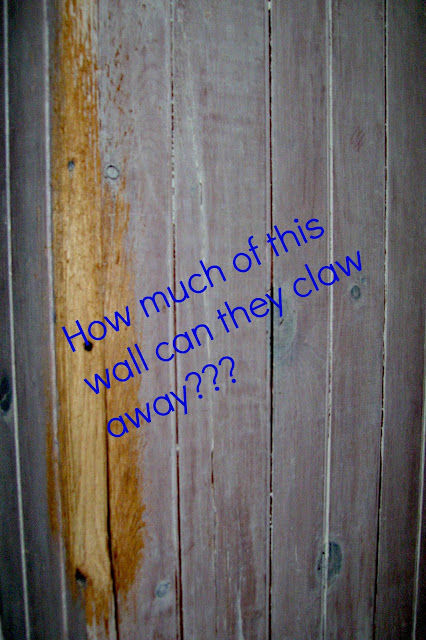 But the real insult came from the stray I call Black Kitty.  He can't have a name because he fights and sprays.  If he doesn't have a name he can't come inside to live. ~ 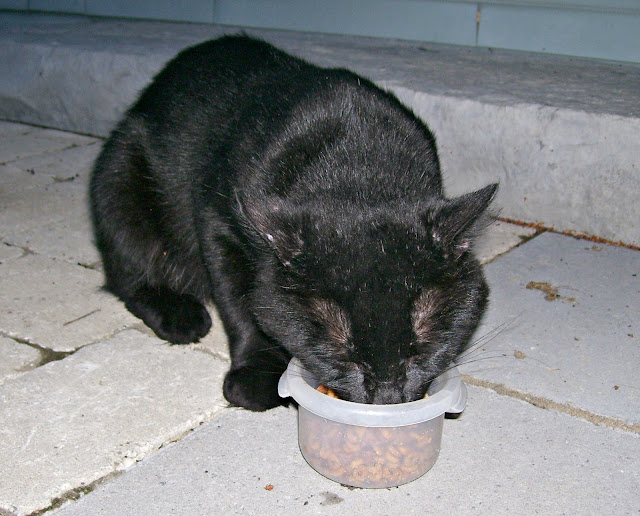 Also, I already had three cats and I'm single and in danger of becoming the CRAZY CAT LADY!  For two years I've fed him outside.  The neighbours asked me not to.  Actually, they asked me not to feed any wild animals because they got a silly notion that the reason we had a wild animal problem was because I fed them all every day.  I just gave the neighbours my best, "What is wrong with you?" cat look and that ended the discussion.

Anyway, I've taught Black Kitty to roll over, which is the only trick I've ever been able to teach cats.

Get ready for it.  Start rolling! ~ 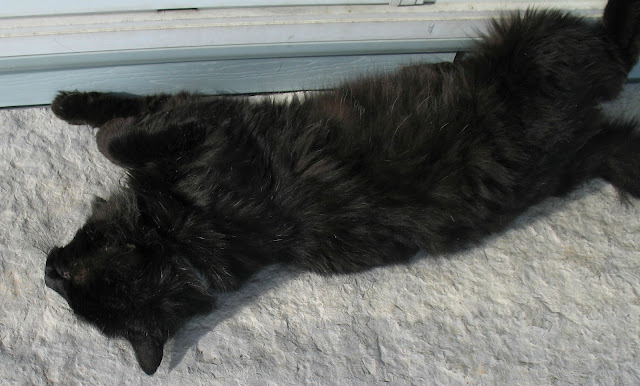 Wait a minute!  Something is on his neck. ~ 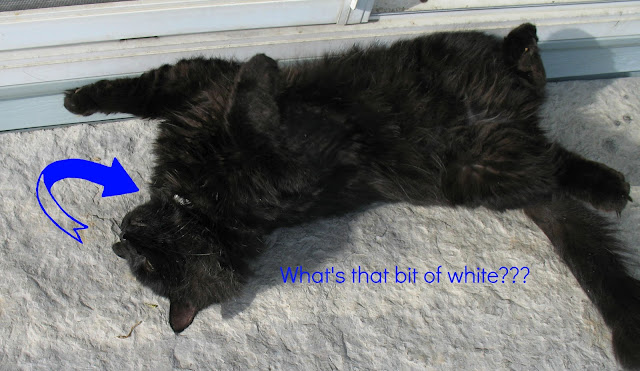 It's a flea collar and I didn't put it there!  Maybe I should attach a note asking if someone owns this guy. ~ 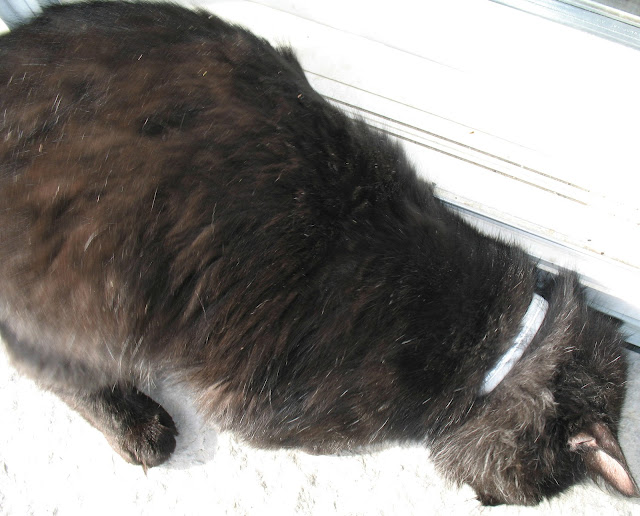 My cats looked smugly at me as if to say, "We always knew you shouldn't be giving him any of our food.". Two years I have fed this guy and put up with him spraying my windows and doors!

I truly hope someone has just adopted him and I'm not losing face with the entire feline population, feral or otherwise, in this village!
Posted by Maureen Wyatt at 02:42