I really feel lucky to be living in Ontario at this time of year!  Gardens and markets are fairly bursting with fresh, local produce and I have officially made it through twelve months of eating pure and natural foods.  I admit to the odd slip.  Lays potato chips and Helluva Good Dip are demons from hell!  But, I only fell off the wagon a few times.  Packaged stuff went out of my diet first and canned stuff followed.

So, be prepared for me to be obsessed with canning and freezing for the next while.  Right now, my kitchen looks like this. ~ 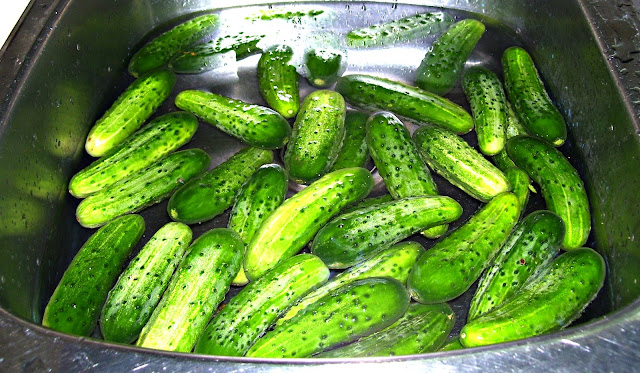 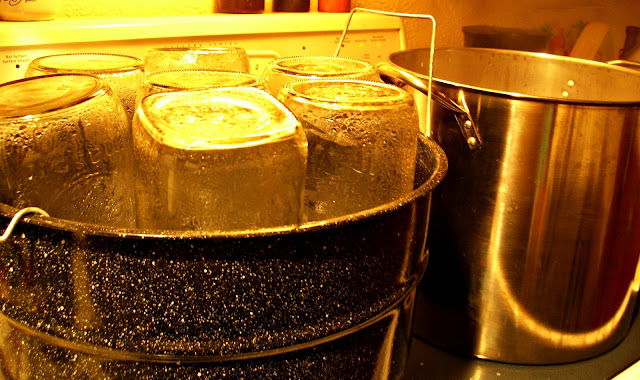 There's no need for facials when you stand over these pots for a day! ~ 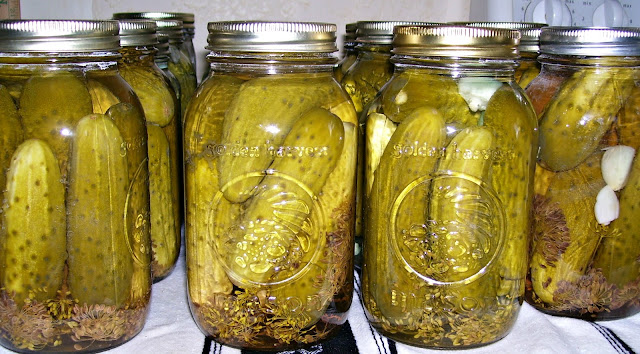 Oddly, I don't eat dill pickles but my kids, grandkids and son-in-laws do and they say these dills can't be beat!

Here's the secret family recipe.  Oh, I guess that means it's not a secret any more! ~

Sterilize 6-9 quart sealer jars in a large preserving kettle.  You can do this a bit ahead of time and place them on a cookie sheet in an oven warmed to 200F.
In a large preserving kettle, bring to a full boil, water, vinegar and salt.
Fill jars with washed cucumbers, a couple of heads of dill and 2 peeled garlic cloves.
Fill jars to top with boiling brine.Cap and let sit for 5 mins.
(Now here's the secret)
Dump the brine off the pickles and back into the preserving kettle.  Put the caps on the jars to keep the them sterile.  Bring the brine back to a full boil.  Refill the jars to the top with the brine.
Hand tighten the rings and leave the jars to cool before moving them.  You will hear the lids snap shut.
Leave for six weeks to "cure" before eating.

All measurements are in Imperial, so Google the conversions for US equivalents.

I think the key to the pickles greatness is the natural vinegar and the reboil of the brine.

I've done a half bushel of these babies and that's all they're getting this year!  The tomatoes are calling my name!

I'm sharing this with:  Inspiration Cafe