I was just thinking about all the projects and decorating I did for the festive season and what mattered most to my family.  Boxing Day is also a good day to reflect on what I will and won't do for next Christmas.  In fact, thinking is about all I feel up to today!  I'm pooped!

Next year, I will not be sewing dolly blankets and little cross stitched doll cradle pillows on the 23rd of December! ~ 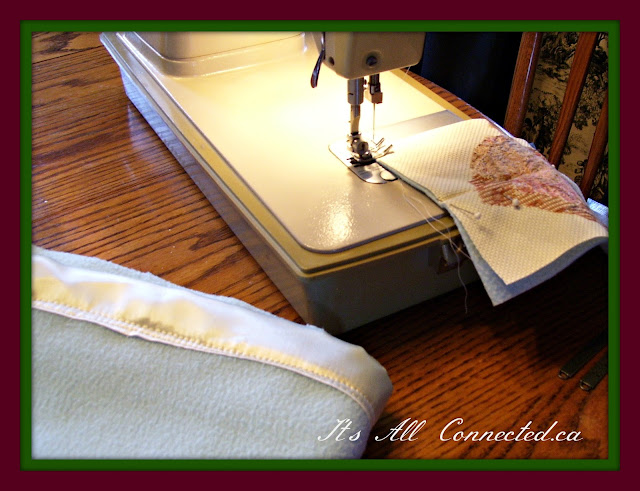 Some extra thought in wrapping was a resounding success with the grandkids loving their Believe tags and jingle bells on their gifts. ~ 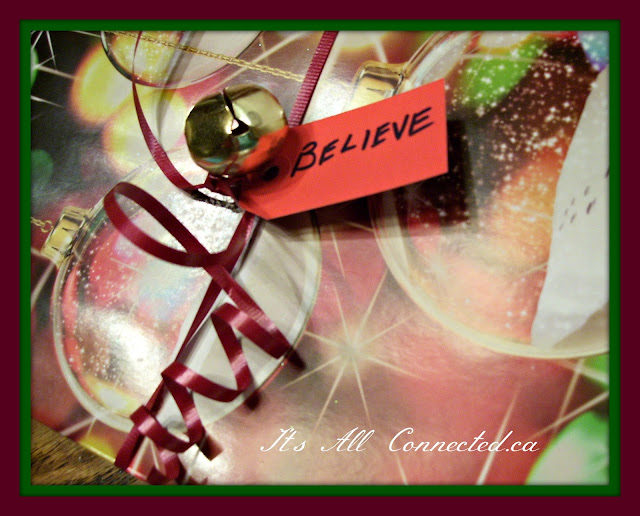 The kids second favourite decoration in the house was the tall glass vase turned into a candy cane parfait with some strings of beads.  If I took five minutes on that one, I'd be surprised! ~ 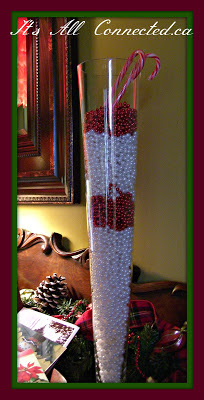 Hanging fewer snowflakes, up higher, saved the chandelier from last years near disaster as kitty Maeve lunged for the decorations! ~ 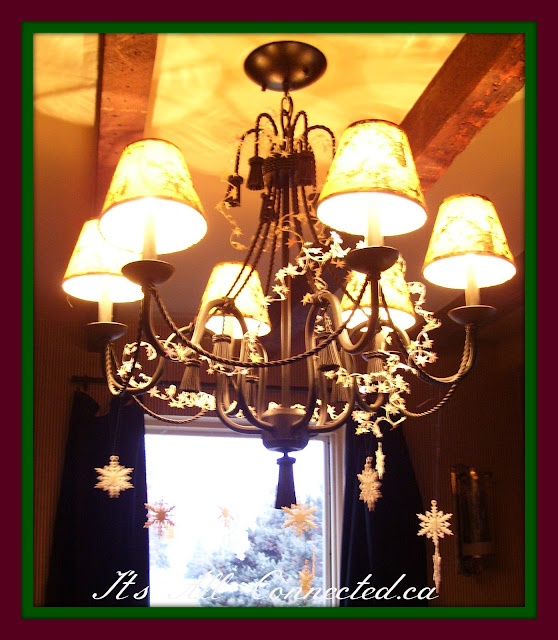 Farm girl tells me her youngest four kids were thrilled with their personalized pillow cases.  Thank you Graphics Fairy and Citrosolv!!!  $2 per present cannot be beat.  Of course I gave them a store bought present as well, but I may not have needed to. ~ 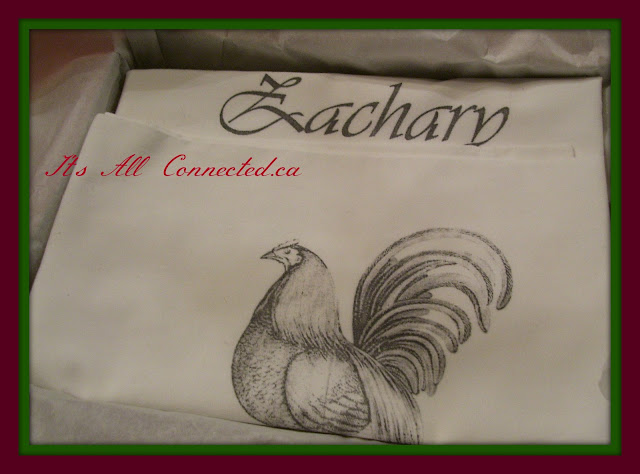 The ornamental polar bear from the library became a ride on toy and looks like he has a bad case of mange now! ~ 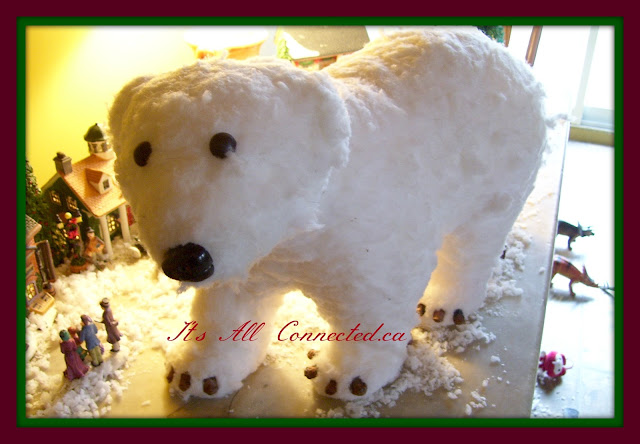 The snow village goes on a table in the family room for children to play with.  It  hadn't been out in years as the grandsons had reached their teens.  When five new grandkids joined the family, it was pulled out of storage and back to being loved.

Two years ago the village nestled on a bed of snow that my grandmother had used under her snow village.  The kids dove right into that stuff and a few hours later started complaining about being itchy.  O'mgosh!  The stuff is fibreglass!  Oops. ~ 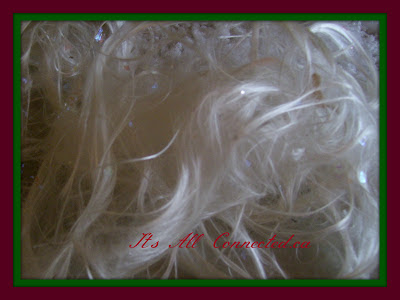 That led to endless jokes from my daughters about children in the olden days playing with barbed wire and caustic chemicals.  That's ridiculous.  We played with BB guns, fishing knives and DDT.  On the train tracks.  While smoking.  Anyway, those are the first kids who wrapped themselves in the fibreglass snow!

Still, I've switched to a bag of loose snow and accept that I'll be vacuuming it up in April.  The kids got out the basket of toys from the spare room and had a heyday marching dinosaurs and circus animals through the tiny town.

The next day, when Baby (otherwise known as Cindy Loo Who) arrived, she marched right up to that snow village with an armful of dinosaurs and did the same thing. ~ 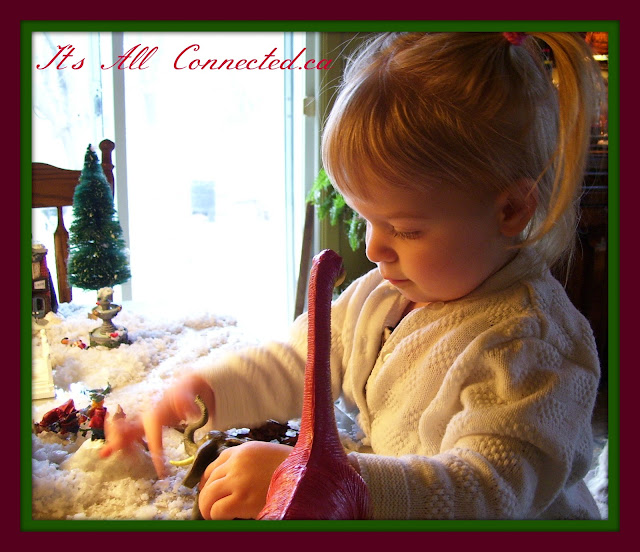 I've applied for disaster relief for the snow village and Peta should be here about the polar bear soon.  My feet are on a stool and I'm about to pour myself a long shot of rye.

My favourite decoration?  These paper angels my daughters made for me so many years ago, that I framed last Christmas. ~ 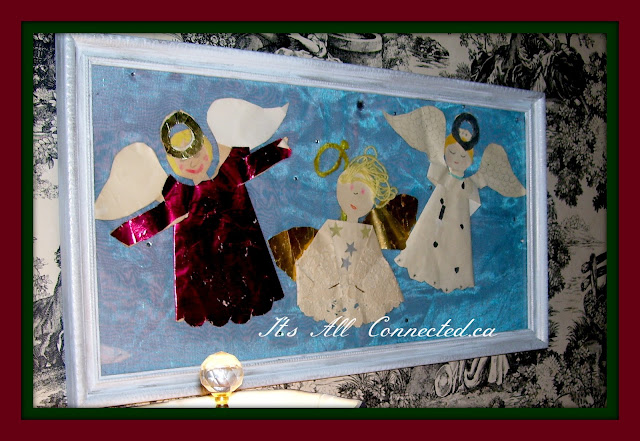 I hope everyone had as merry a Christmas as I did!
ps~I must be very tired.  I spelled It's All Connected wrong on every single pic!  I'm not going back and fixing them so we'll all have to live with it.
Posted by Maureen Wyatt at 18:11