When my daughter decided she wanted to recover a settee with drop cloths, she asked my sister and I to come and help her.  That would be because she doesn't sew and had never recovered anything before.  We do sew but we had never recovered a piece of furniture.  She lives 1 1/2 hours away from me and we would only have the afternoon to work on the piece.  I thought this was a crazy idea, but I'm a mom and it's really hard to say no your kids! 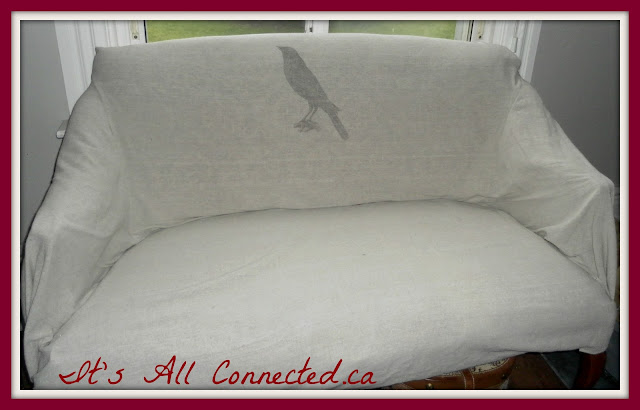 Since drop cloths are made of cotton, they shrink like crazy and you have to pre-wash them and dry them in the dryer, to get all the shrinking out of the way, before you start fitting them.  It makes them less stiff and easier to work with as well.  Farm girl called me back and asked if I was sure she should put them in the dryer.  Uh huh.

Now, I've probably bought a dozen drop cloths and I have never seen one like she bought.  It had a plastic backing that melted and fused to the cotton!  You could see the blobby parts through the cotton and it made a weird crinkly sound when you moved the fabric.  Soooo, we spent a couple of hours peeling the stupid plastic off.  If you bought your cloth at Home Hardware and it has a plastic backing DO NOT PUT IT IN THE DRYER!  In fact, just go to Home Depot or Lowe's and buy the normal drop cloths.

Farm Girl didn't want a slip cover and wanted the fabric stapled right onto the piece.  Big Sis and I are pondering how to achieve this without being able to remove the old fabric to use as a pattern.

The old stuff was pretty well shot and there was no getting that off except in bits. ~ 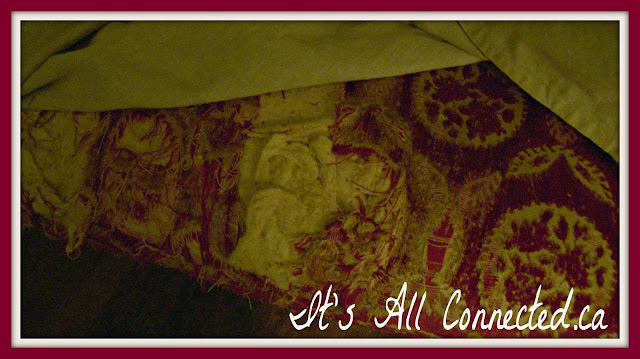 We're measuring and pinning and Farm Girl is saying, "Just bunch it up and staple it on.".  She has 6 kids, 2 dogs and a barn full of rescued animals and she wants everything done FAST! ~ 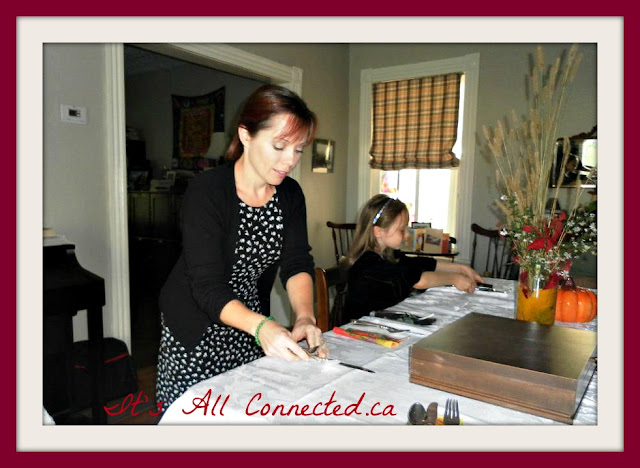 We don't usually work like that, but I was afraid we'd be sent to bed without supper if we didn't  hop to it.  The drop cloths were fitted into place and the excess down the inner sides was cut away.  Big Sis seamed the cut away areas on the sewing machine.  The arms are solid to the seat so that made the fit a bit tougher to do. ~ 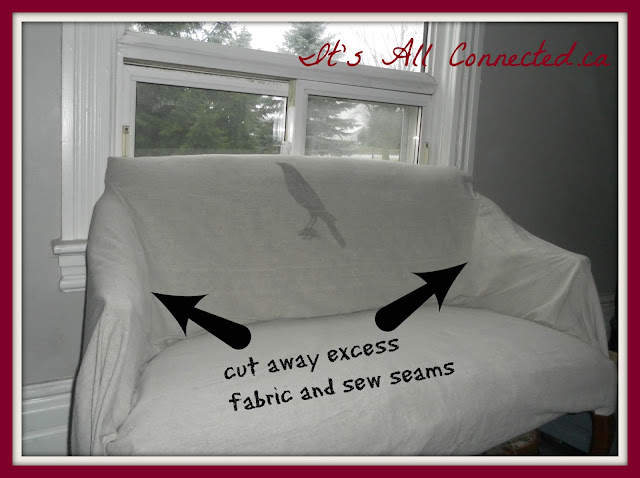 Farm Girl chose an image of a crow from The Graphics Fairy and did her first Citrosolv transfer.  She's hooked on them now.  My eldest granddaughter is too and dropped her request for me to get her an expensive IPod for Christmas in favour of pillowcases with images on them.  That officially makes The Graphics Fairy a fairy godmother to me!!!

Then, we fitted it all back into place and started stapling it to the settee frame.  It's a little less fitted than I personally would have liked but Farm Girl is delighted with it!

She calls it her Poe-esque settee! ~

I'd recommend trying something a little simpler for the first time and maybe spend more than three hours on the job!