Reviving A Deck On The Cheap!

After I finished working on the rental property redo, I planned on taking it easy.  I wanted to sit by the river and let the world flow by.  I did that for exactly two hours! As much as I like to have the river front look natural,  my deck was an unsightly mess!

It was a hodgepodge of the original deck and one I had the patio installer guys move back here with their Bobcat.  They cut it, moved it and plunked the two pieces down. ~ 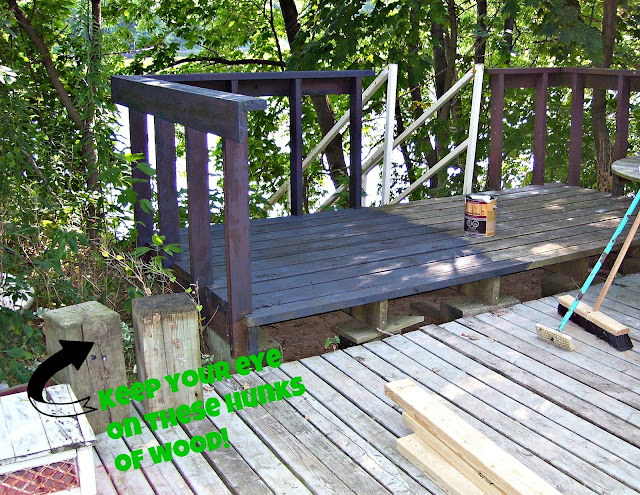 The old deck was stained brown and the other pieces were light blue.  Sorry, I started to stain before I remembered to take a pic.

The light blue deck was in some serious trouble!  It had been through a tornado and came out on the short end of that!  Here's how she looked before they moved her. ~ 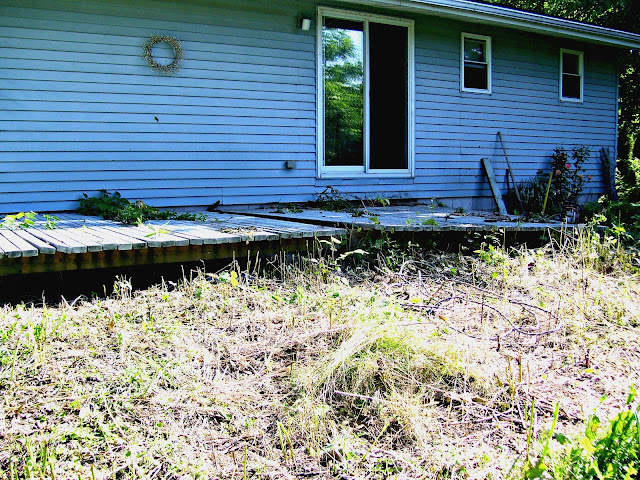 I think I only had about six readers when I wrote about the yard devastation, so you might want to catch up on that tale here.  You should save all your good stories until you have at least a dozen readers!

Now, I think I've mentioned a few hundred times that I'm a little skint for cash right now, so this spruce up has to be done on the cheap!

I paid two neighbouring teenage boys $70 to move all the pieces of deck together and level them out.  I should have paid them danger pay for the nest of bees they uncovered!

It took two gallons of stain, at $25.99 each, in a colour called Great Lakes Blue to unify the pieces. ~ 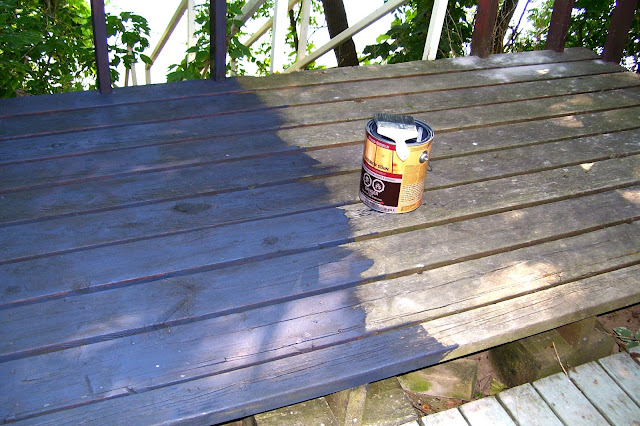 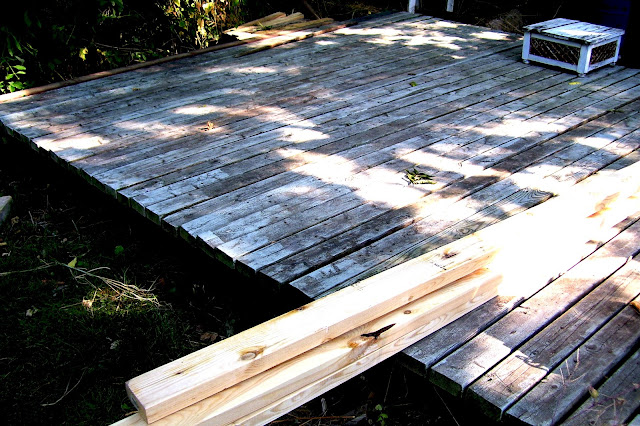 The existing furniture were some of the most disreputable pieces you've ever seen! ~ 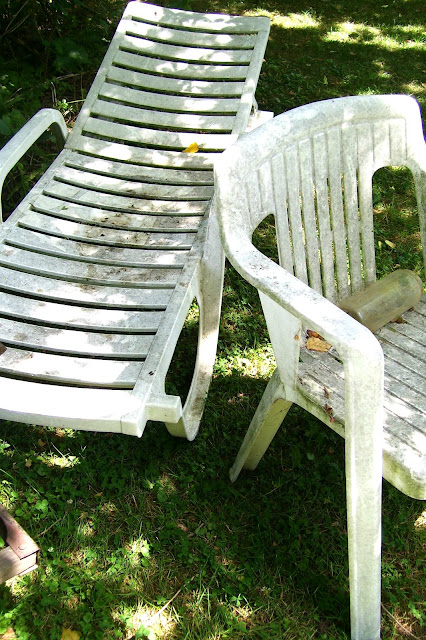 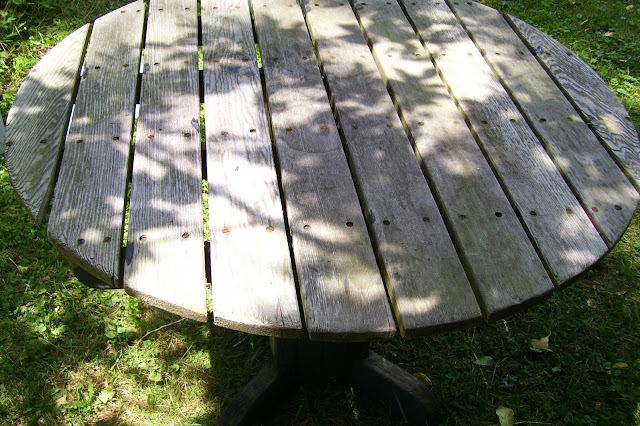 Well, we all know you can fix that! I roped my sister into painting the chaise lounges and the chairs with some latex paint in BM mayonnaise.  I already had the paint, so no cost there.  Hey, I'm putting in boards and staining decks! ~ 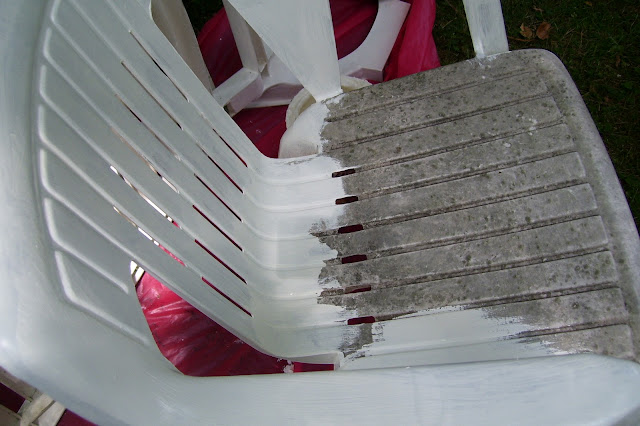 The cedar table got a coat of stain and an interesting decoration.  I'll tell about adding the picture in the next post. So far, we are free on the furniture! ~ 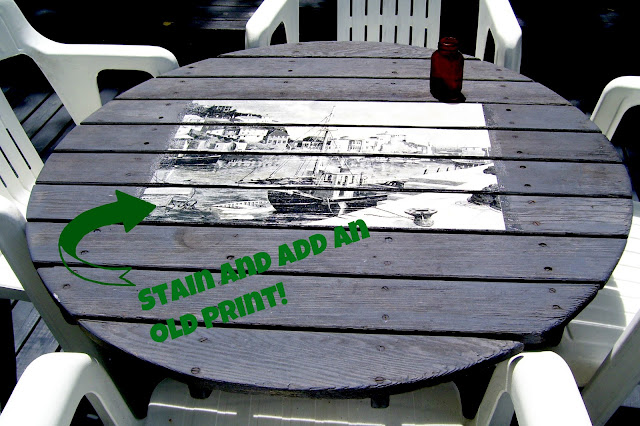 My sister and I like to sit back here and read magazines.  Because we were interior designers, we called that part of our job. Somebody has to do it!  Since she's allergic to bees and I'm not wild about mosquitoes eating me alive, we needed a screened in area.  Gazebos don't survive the wind that comes off the river in stormy weather but kitchen tents will.  The cheapest I could find was $45.00 at Canadian Tire.  It just happened to be a good match for the Great Lakes Blue! ~ 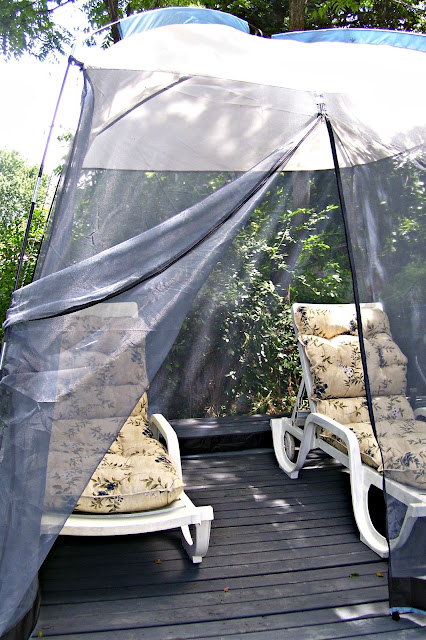 And, those hunks of wood I told you to keep your eye on?  They are the tops of guard rail posts that get cut off after the rails are installed.  My brother in law brought them to me years ago. ~ 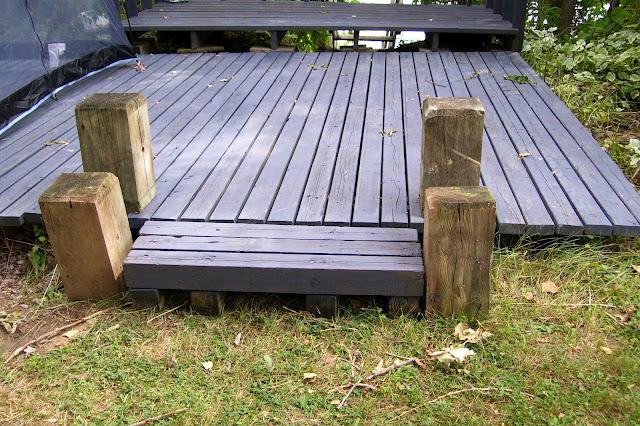 A coat of light grey stain, some twine from hay bails twisted to look like rope and they become wharf pilings! ~ 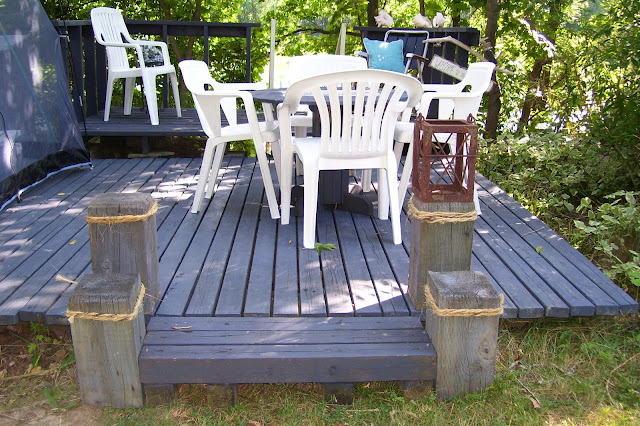 This is what was accomplished in two days.  I need to close in the area between the two decks to cover the supporting posts and the stairs to the dock need a coat of Tremclad but I now feel like I can honestly say ... ~ 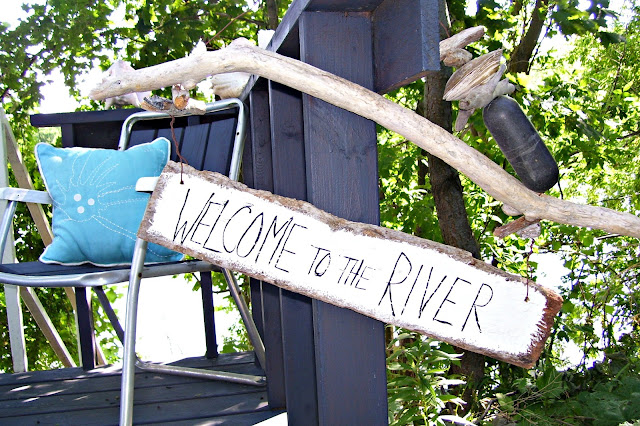 Next comes the fun part - the decorating!!!