Letting Go Is Not Forgetting

Tomorrow is Remembrance Day.  I will pause and think of all the men and women who have sacrificed so much for me.  I'll think of my mom and how proud she was of working as a riveter on Lancaster bombers when she was only 15.  I'll think of my dad going overseas at 17 as a tailgunner on those same bombers.

There will be a slow flight over my house of one of the two remaining Lancaster bombers, in the world, as it leaves it's hanger not ten minutes from where I live.

This will be the first year I will not have the medals, press clippings and photos that belonged to my Aunt Molly.  Dorothy (Molly) Mulholland and Wyn Pitkeathly were the first two nursing sisters to arrive on Juno Beach, Normandy, twelve days after the invasion.  They pressed forward with the troops into unsecured territory, digging their own foxholes and operating in canvas tents.

A third nurse joined them and they were the darlings of the press photographers.  This photo, taken in Flanders Fields, was famous.  My aunt is on the right ~

After the photographer took the picture, they were all told to stay very still as they had accidentally gone into a field full of landmines!

Here they are having a bit of fun for the photographers ~ 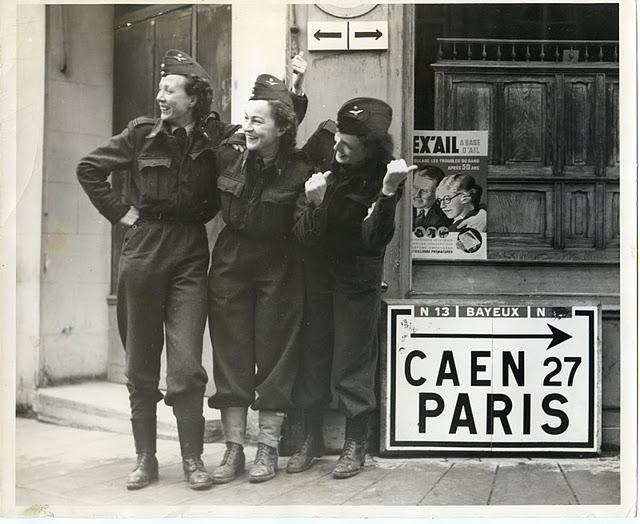 My mom kept a scrapbook of newspaper clippings.  She was so proud of her older sister! ~ 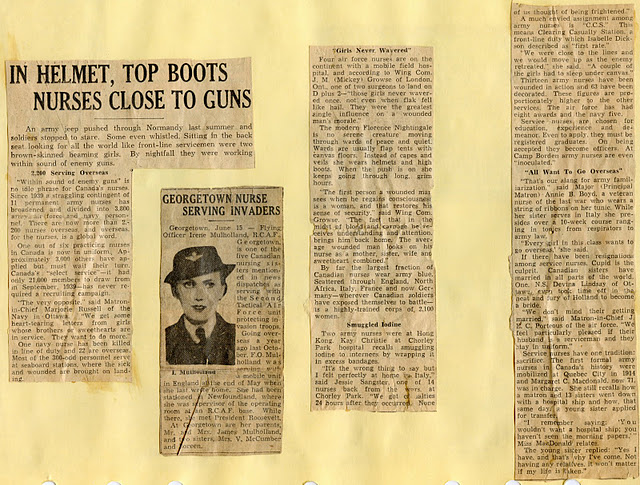 During the Battle Of The Bulge, Aunt Molly operated for seventy two hours straight, in canvas tents, while bombs rained down all around them.  For that act of selfless courage, she was awarded the Royal Red Cross First Class, one of only two awarded to Canadian nursing sisters in World War II. This medal is very rare and certainly prestigious.  Queen Victoria awarded the first one to Florence Nightingale!  Aunt Molly's medal was given to her by King George VI in a ceremony at Buckingham Palace.  For those of you who loved The King's Speech, she said he was friendly, asked what her first impression of England was and laughed when she said it was covered in chimney pots. 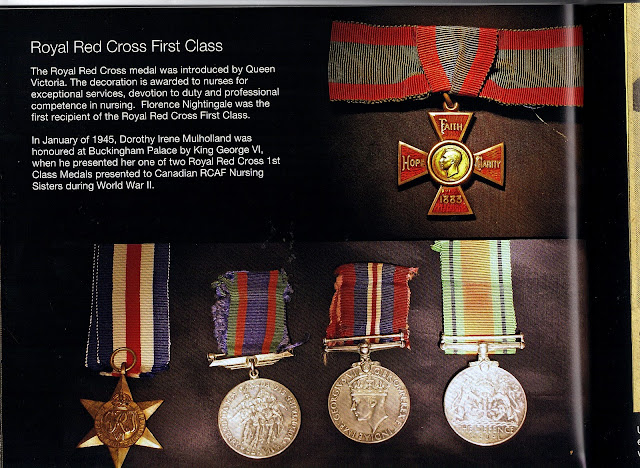 The other side of the story is that Aunt Molly suffered from post traumatic stress for the rest of her life.  She suffered nightmares about the ones she couldn't save.  Loud noises had her ducking for years.  She turned down the position of Head Nursing Sister for the Canadian Airforce and returned to her small hometown to become a factory and high school nurse.  Her fiance had been killed as he parachuted from his plane over Algiers and she never married.

Molly Mulholland passed away on November 10, 1985.  Her sisters held a quiet funeral, no fanfare or press were intended.  But, the people she served with had their own farewell to say.  In stunned amazement, we watched all the members of her local legion march to the casket and place hundreds of poppy pins in the lining.  Their gratitude stays with her forever.

After my mom passed away this year, the family had to decide what to do with hundreds of press photographs, the medals, compass, silk aviator map scarf and news clippings.  The collection was large and in perfect condition.  It was important to the family and certainly had monetary value, but we knew it was also important for future generations to be able to see the contribution nursing sisters made for their country.  My cousin's son, Jamie, contacted the museum at Juno Beach, by e-mail, and asked if they were interested in having any of it.  He sent photos of a sampling and the response was immediate.  The director answered, herself, and they would definitely want it all.  Jamie and his wife delivered the collection to the museum, in person, to ensure it would arrive safely.  It is the largest donation of memorabilia they have received and included many pieces that they were unable to acquire by any other means.

This year, the Juno Beach Centre did twelve passports for guests that followed a particular service person from birth to death.  Aunt Molly was one of the twelve passports.  We are thrilled to see her honoured and remembered.

It is only by being able to let go of our keepsakes that we ensure Molly Mulholland will never be forgotten.

Because of all the sacrifices made on this beach, her great nephew can stand there today. ~

Sorry about the quality of some of the photos.  You see, I don't have the originals, now, and have to pick them off the net!