It has been five years since my sister walked through the door of the house she purchased without seeing inside.  If you missed Part I click here.

The lady who sold it to my sister was just as dumbfounded as everyone else at the condition it was in.  She turned to my sister and asked her if she still wanted to close the deal that day.  What were the options? There was no other place available in the village.  They wanted to stay in the community that had given them a place of friendship and peace after their son was killed.  The mortgage payment would be about half the cost of renting an apartment and they could keep their pets. The spacious yard gave ample room to grow their own vegetables, which would save them money on their grocery bills. With knots in her stomach, she said yes.  The vendor offered to absorb the cost of replacing the furnace and that, at least, didn't have to come out of the $10,000 reno budget.

My brother renovated the bathroom, while my sister's son pulled up and replaced the rotting kitchen floor. Although my brother in law's back injury didn't allow for him to do heavy work, he helped his cousin replace the electrical wiring. ~ 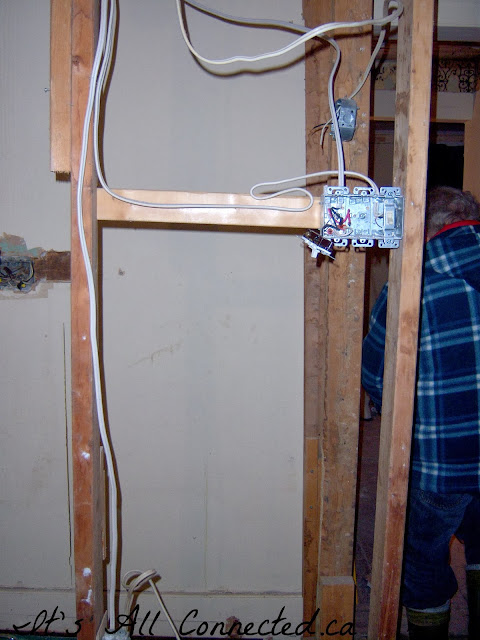 The doors were replaced and as many windows as they could afford were installed by a professional.  The rest they would have to do themselves, with some help from family.  Loads of demolition materials beyond counting, were hauled to the dump.  My sister and I have no idea what kind on insulation filled the bathtub during that demolition and that we bagged and carried out of the house.  Sometimes, it's best not to think about the stuff you get into in these jobs!

The kitchen had an acoustic tile ceiling that was mouldy from a roof leak.  It came down and the good news is, there was a beadboad ceiling under it.  The bad news is, it was a heck of a mess! ~ 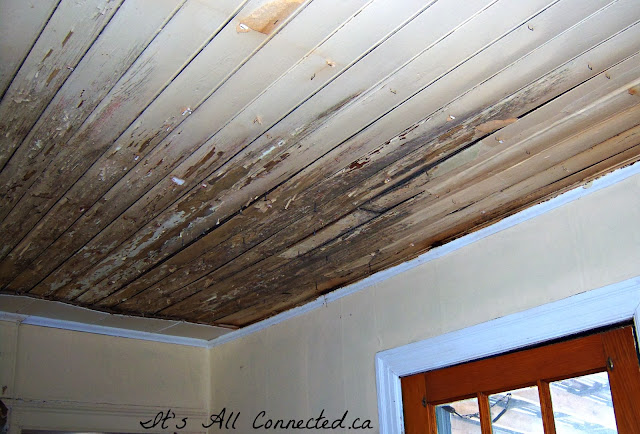 Can it be salvaged?  You betcha!  All it took was a whole lot of scraping, her husband fitting a few missing boards in and my sister devoting her life to filling the cracks with silicone filler.

Five years later and she still hasn't got it done. ~ 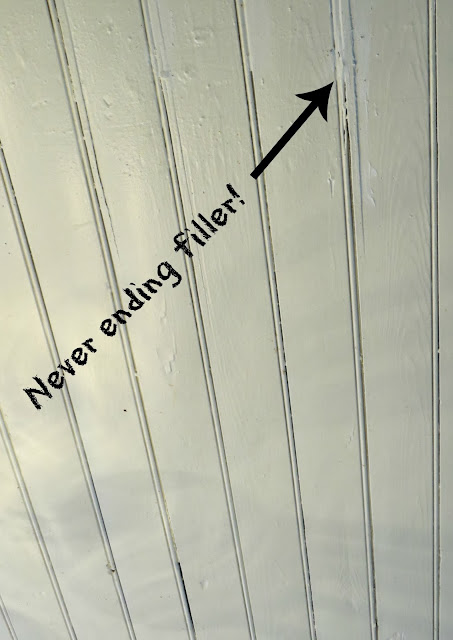 The kitchen also had wood on the walls.  Okay, they need a little patching. Or a lot of patching! ~ 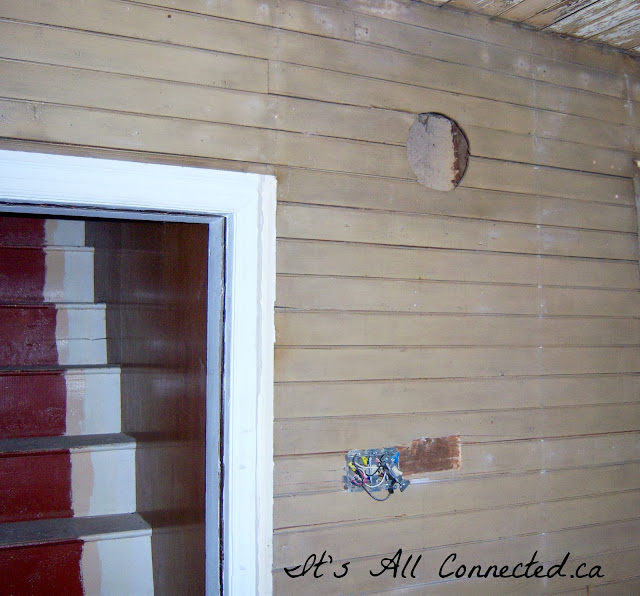 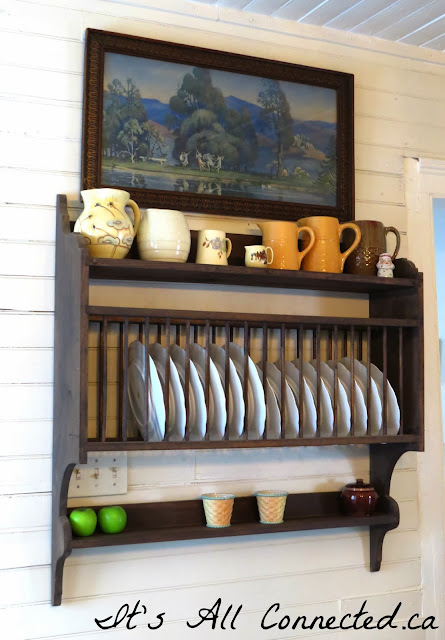 The roof leak had done serious damage in the upstairs bedrooms as well.  Under the mouldy panelling and layers of wallpaper was the original plaster.  It's a very rough plaster so you have to embrace a rustic look for it to work.

Down came the panelling. ~ 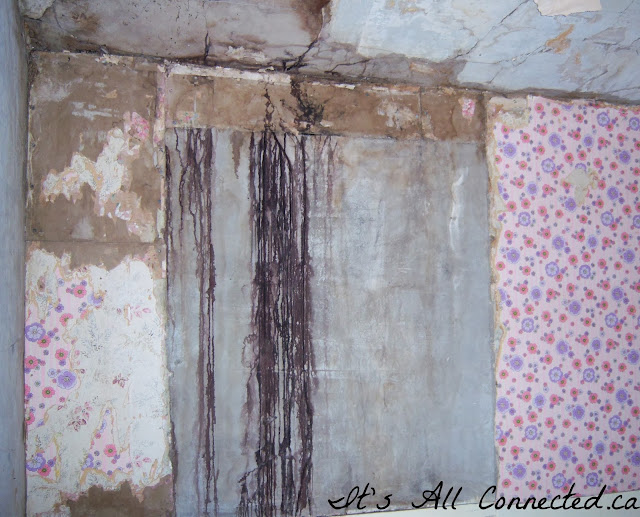 My sister set in with a bucket of plaster to fix the walls as much as she could.  ~ 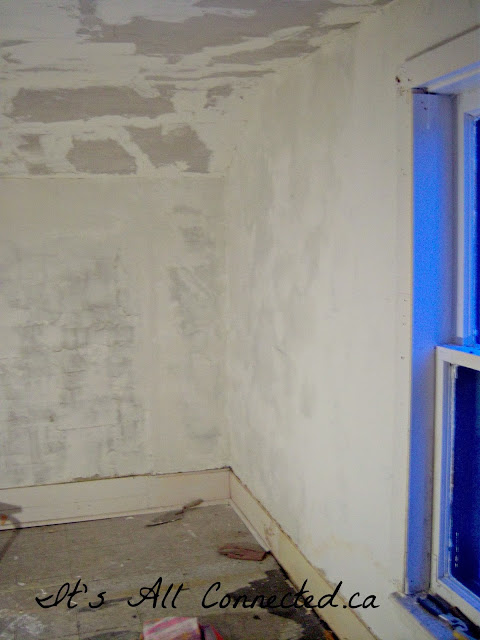 Only the window wall was beyond repair and I had a roll of textured wallpaper that we put on it to cover up the worst of the patches. 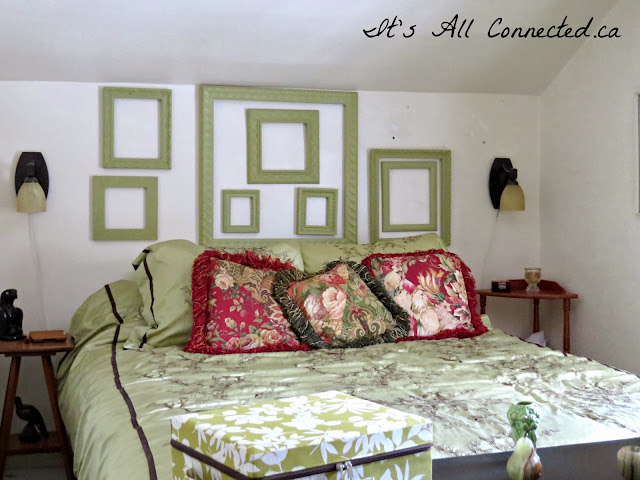 My sis says to be sure to tell you that she bought that bedding on deep discount.  I think she's getting into this story. LOL

The original beams in the living room ceiling were exposed and stained in a dark grey. ~ 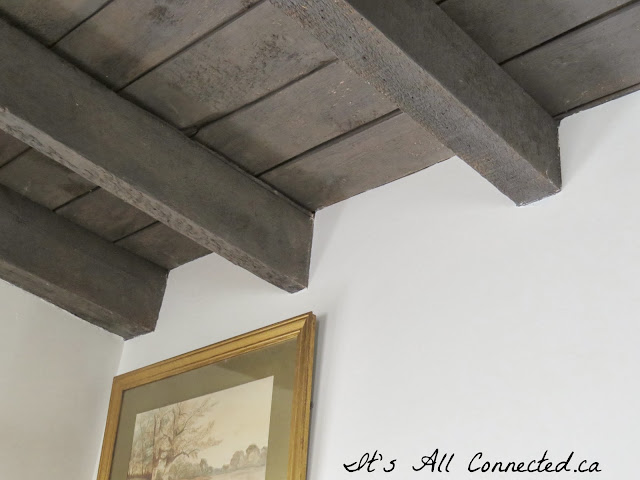 Having lived with my parents for a few years, they had very little of their own furniture left.  Almost everything in the house came from auction sales and thrift shops. It all has to do double duty as well.  With only 800 sq. ft. of living space, storage is at a premium.

This corner cabinet cost $5 and looks great with a new paint job. My sister made all her own window coverings, using discounted remnant fabrics. ~ 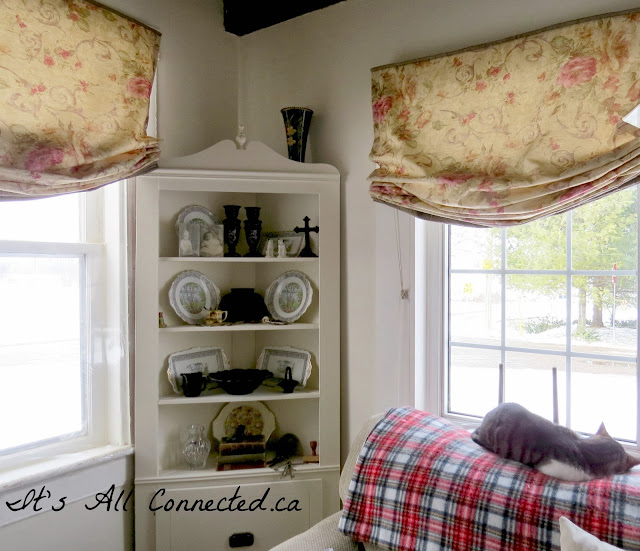 You may remember this buffet I painted and added a Modpodge transfer to the doors.  It still seems to be circulating around Pinterest.  It not only holds the TV but gives them extra storage. ~ 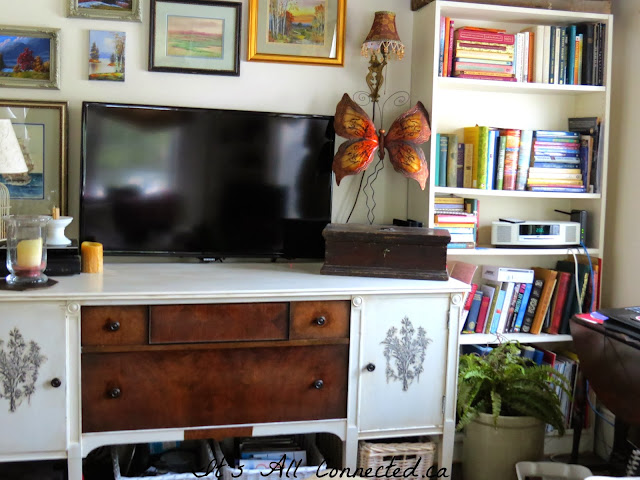 Over the years, as funds have permitted, they've done upgrades to the house.

A narrow hall between the kitchen and living room was redesigned to hold a coat closet.  Their son is busy with his own home and family, but came to build it for them. In a house that didn't have even one closet, this is a huge deal!  ~ 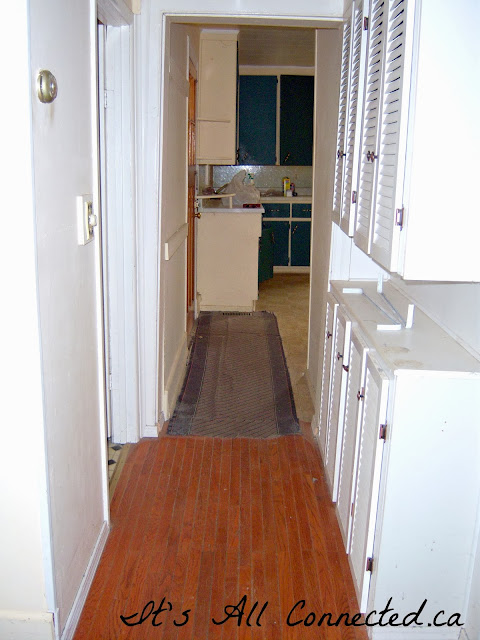 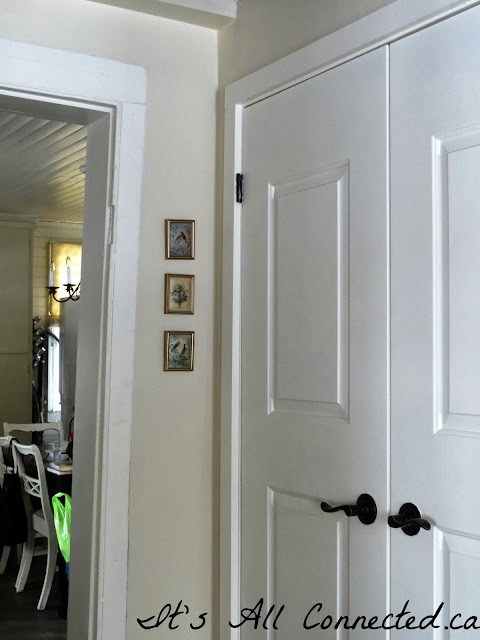 Their son also built a new front porch to give the house a little curb appeal. ~ 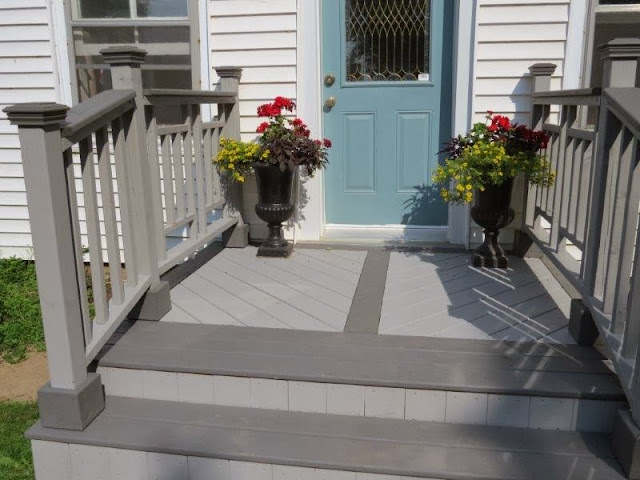 I well remember my sister sitting crying because they would never be able to have a house again.  They would never qualify for a mortgage.  I remember how she worried, night and day, about where they would go when my mom's house was sold.  She was in her sixties and the future looked very bleak.  There didn't seem to be any hope.

They had a little luck and a lot of hard work and perseverance to turn that fate around.

At Thanksgiving, they had a comfortable and, not perfect but charming, home to host a family dinner in. ~ 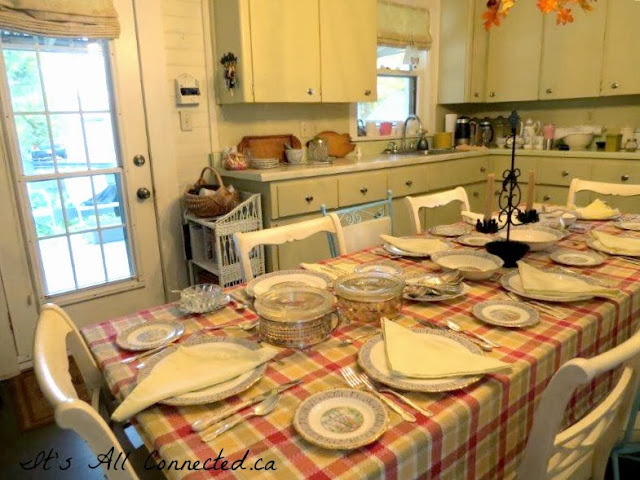 Saving that house became my sister's mission.  It returned the favour by helping her heal from the sorrows in her life and by giving her a place to call HOME.

It proved to her that there is always hope!

ps - As someone who has suffered and survived, she has really appreciated your heartfelt comments on the last post.