January is all about comfort food for me and nothing is as homey as a pot of soup simmering on the stove. I'm trying new soup recipes all the time and saw this one for Cream of Celeriac Soup in the January 2012 issue of Victoria magazine.

Gather up a few ingredients and remember, soup is very forgiving. If you don't have the exact ones, go ahead and improvise! ~ 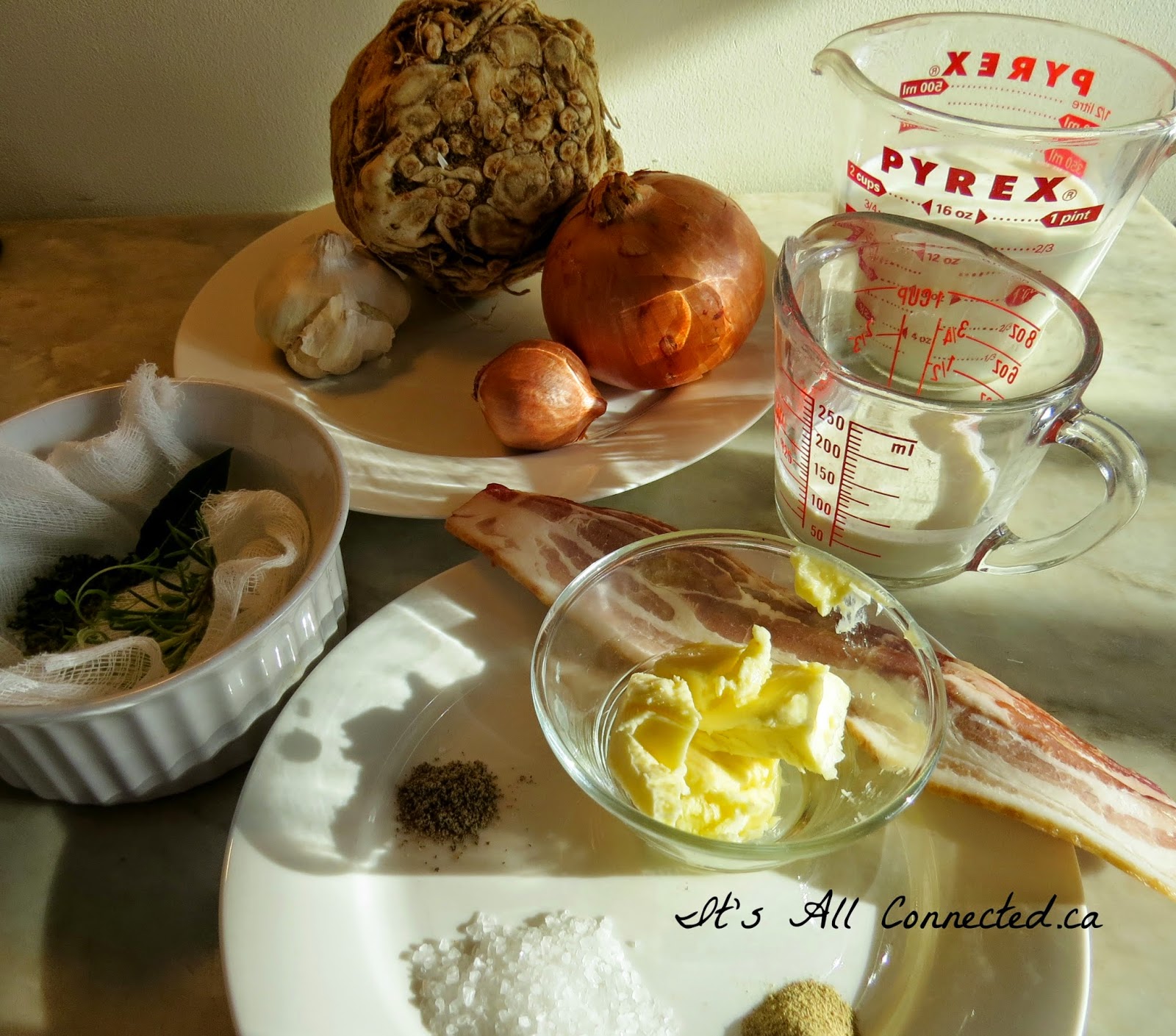 For the first stage of making your soup you will need:

In a square of cheesecloth put 3-4 sprigs of  fresh thyme, 3 sprigs of fresh parsley, 2 sprigs of fresh rosemary, and 1 bay leaf.  Tie the cheesecloth to make a packet for the herbs. If you use dried herbs, you can add them directly to the soup, without tying in cheesecloth. Just be sure to cut the amount of each back when you are using dried so you don't overpower the flavour of the celeriac. 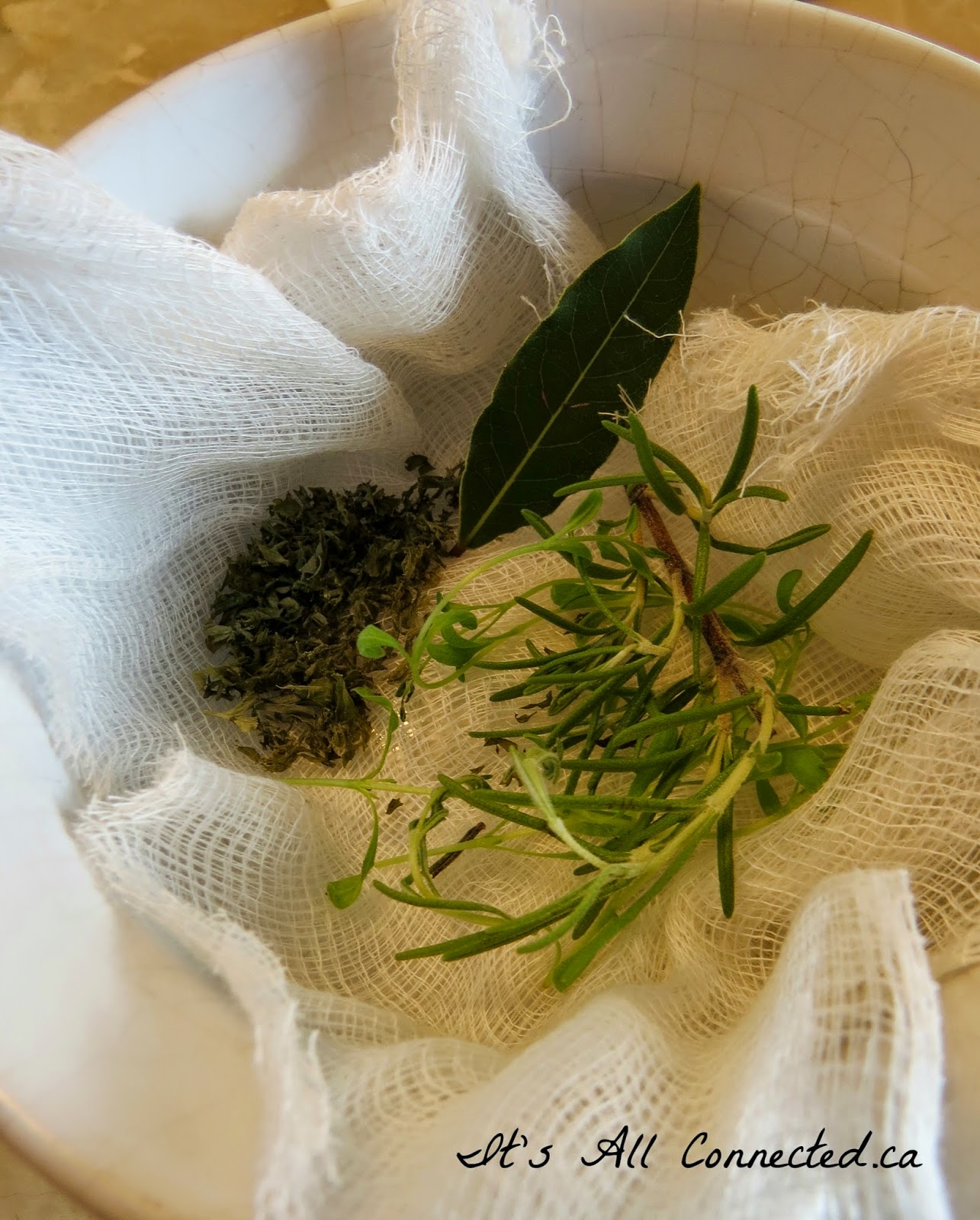 In a dutch oven, saute the bacon until cooked through. All you want from this is the drippings. ~ 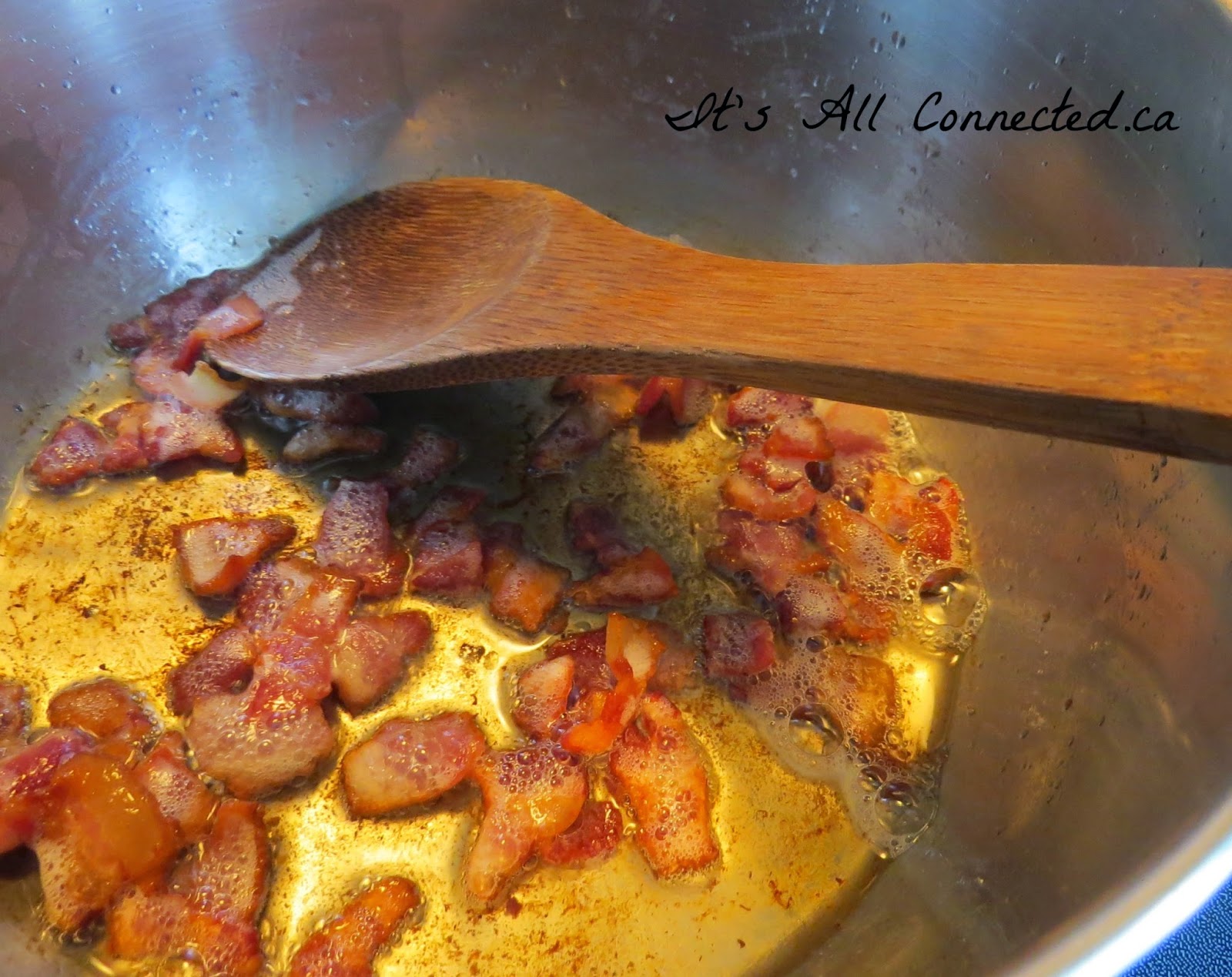 That's about 4 TBS., if you are like me and save bacon drippings in a jar in the fridge. The recipe said to discard the bacon. I assume the author lives in some kind of parallel universe where you throw out bacon. If you don't want to use it as a garnish for your finished soup, just eat the darned stuff while you are waiting for dinner!

Remove the bacon from the pot, reserving the bacon fat. Add the butter to the pot and melt. Add onion, shallot and garlic. Cook over medium heat, stirring often, until onion is translucent and tender (about 5 mins.).

Add celery root, chicken stock, water and the Bouquet Garni. Bring to a boil and reduce heat to simmer, covered, until tender, about 45 mins. ~ 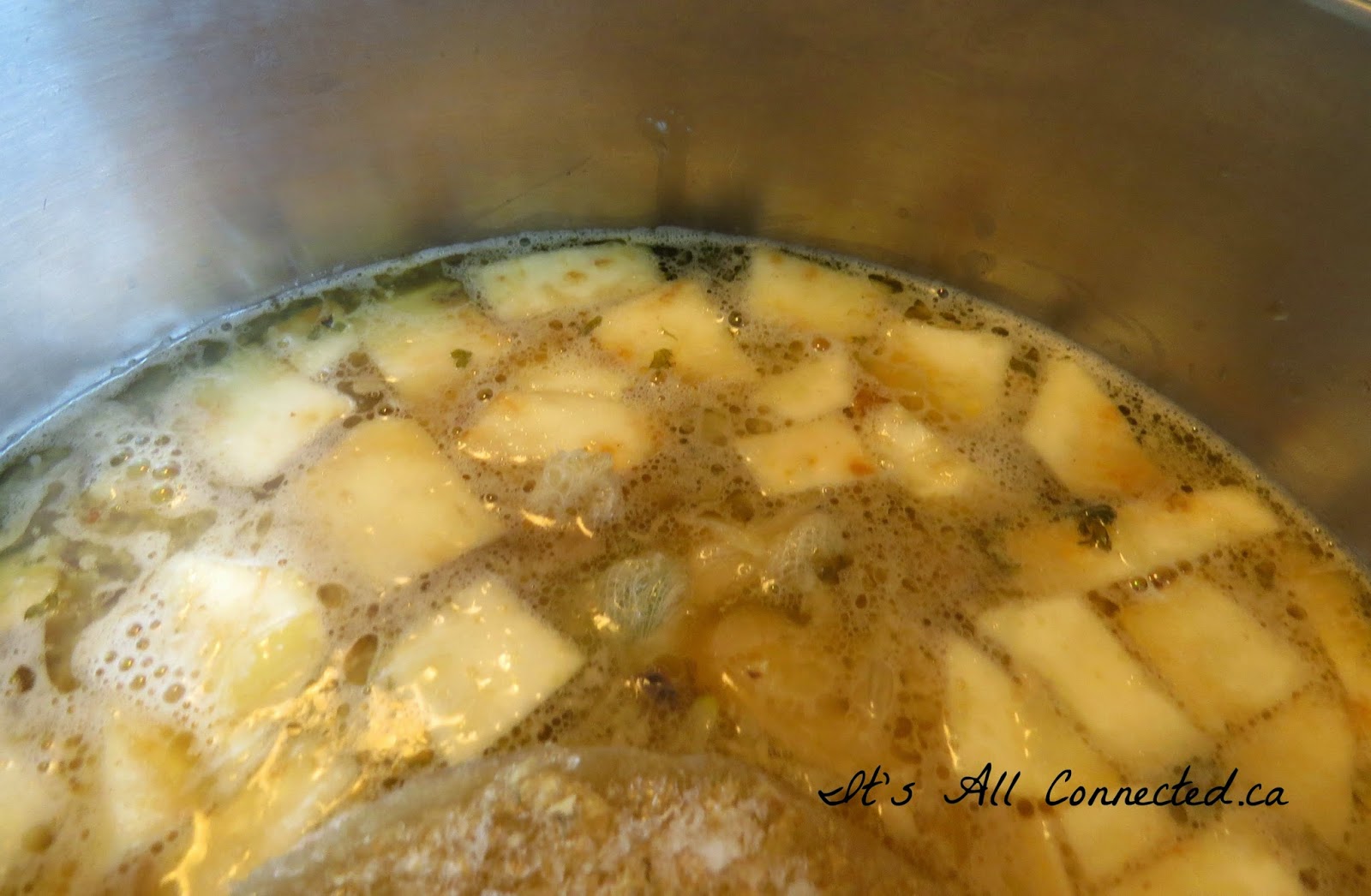 Remove the soup from the heat and allow to cool a bit. Take out the Bouquet Garni and discard. Puree the soup with a food processor or immersion blender.

Here's a trick for making cream soup ahead of time. Once the soup is pureed, and before you add the milk, you can freeze it as a base. It works great with all the usual cream soups. Just thaw it and add the dairy when you reheat it.

For the second stage of the recipe you will need:

On medium heat, bring soup back up to a gentle simmer and add the salt, pepper, half & half and whipping cream, stirring occasionally to make sure the cream doesn't separate.

The finished soup had a delicate, celery flavour and a thin consistency.  If you like a thicker cream soup, I'd cut the water back by at least half.  ~ 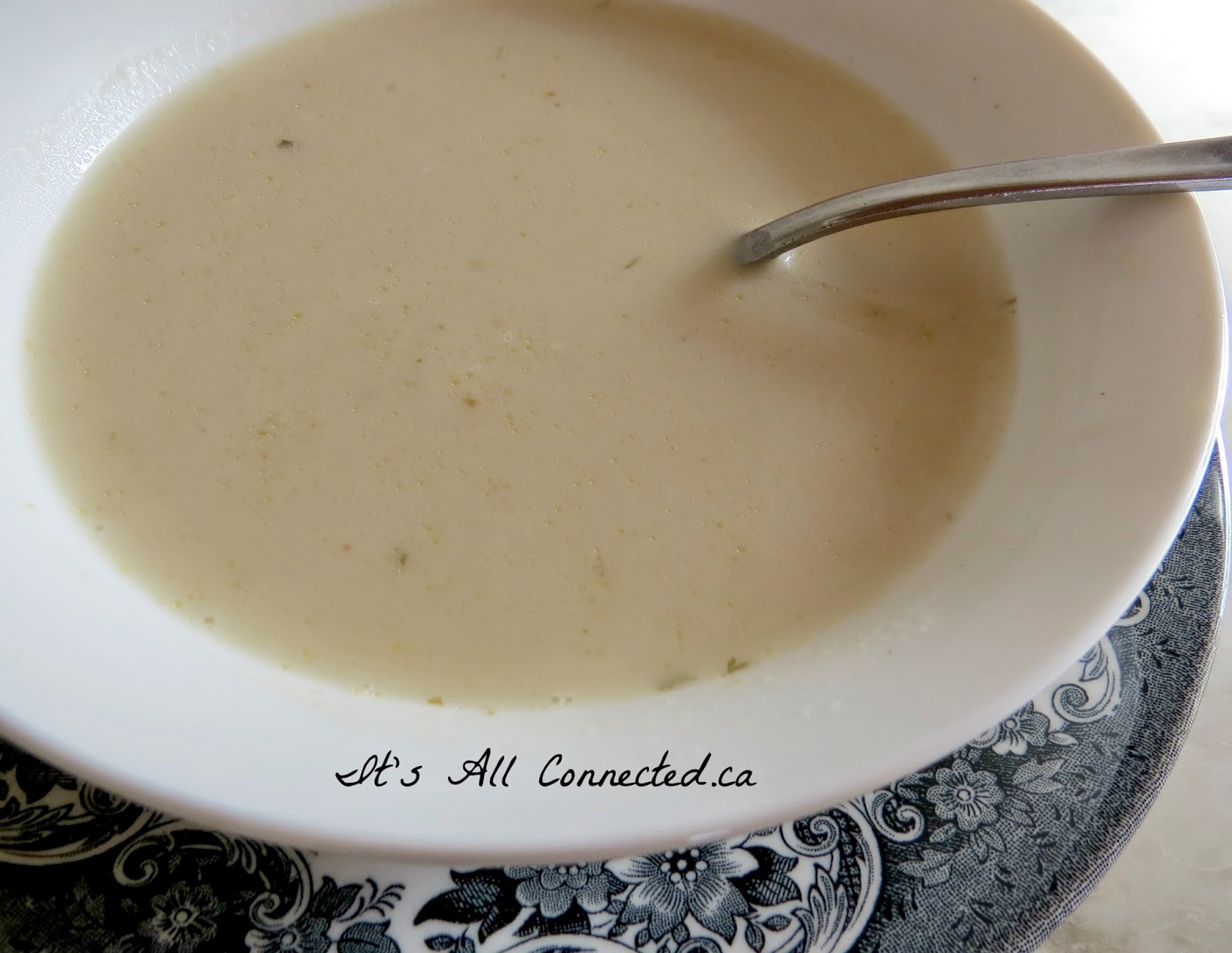 I loved the 'spring like' flavour of this soup and it would be perfect served at a luncheon with quiche.

It makes about 2 quarts and serves 6 generous portions.
Posted by Maureen Wyatt at 00:38