I'm nowhere near done redecorating my bedroom, but I wanted to get a shelf hung over the window before Valentine's Day. 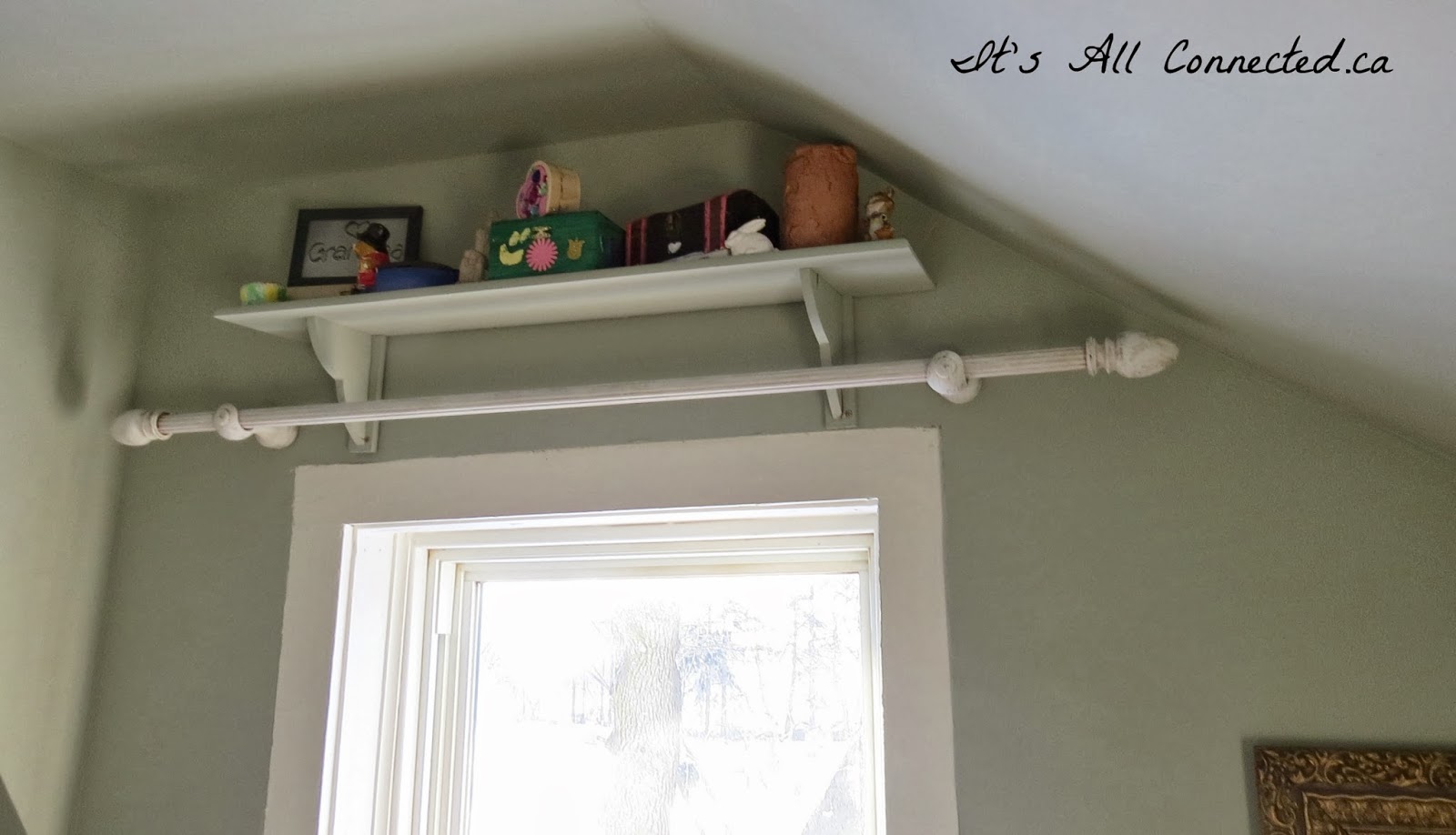 It holds a collection of of objects that are unremarkable except for the pure love that came along with each one, when they were gifted to me.

On the right there is a bunny statue that lost an arm long ago.  It was the first gift my baby brother gave me and he was so proud of his present.  Beside it is an unglazed pottery vase that my eldest daughter made in grade two.  She missed the painting and glazing classes because she had chicken pox and I remember how bitterly she cried because her present wasn't finished.  I told her I didn't need a vase but I did need a holder for utensils in the kitchen and this was perfect for the job.  And so it was for 30 years, until she gave me a real utensil holder and it was retired.  The box on the left was a gift from my baby brother's daughter and she was just as proud as her dad had been, all those years before, to give it to me. I write wishes on scraps of paper and store them in her treasure chest to let the universe work on them. 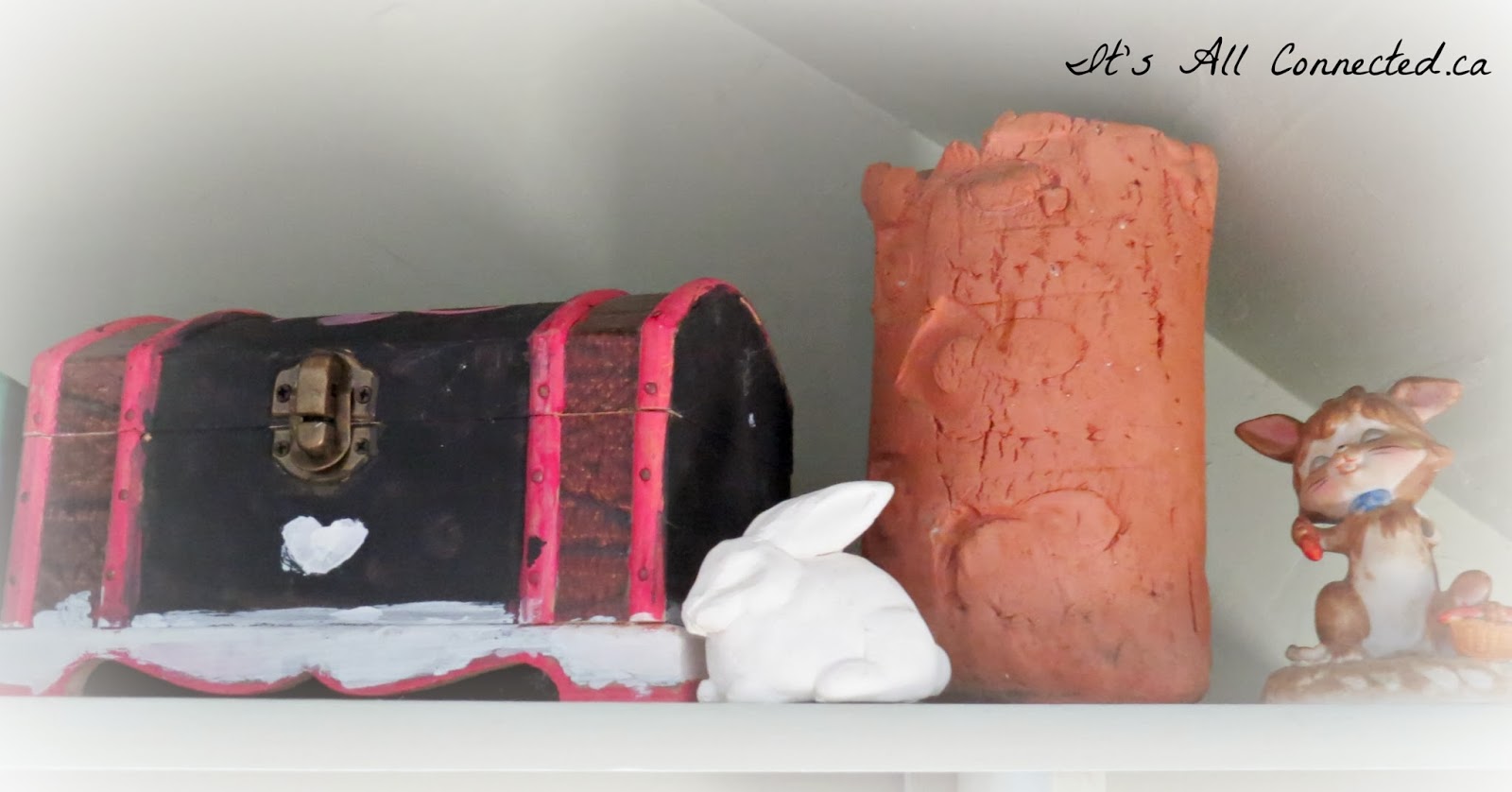 When my daughter and grandsons lived 800 miles away, they drew Grandma in the sand and sent me the picture.  It sits on a box my daughter painted.  Inside the box is a geode that a scientifically minded little grandson painfully parted with to give me something extra special.  The Paddington statue is a craft done by my youngest daughter.  When her sister moved on to high school, she had to stay at home alone for an hour each day and was very nervous about it.  I bought her some craft supplies to keep her occupied for that hour and she made me the statue. 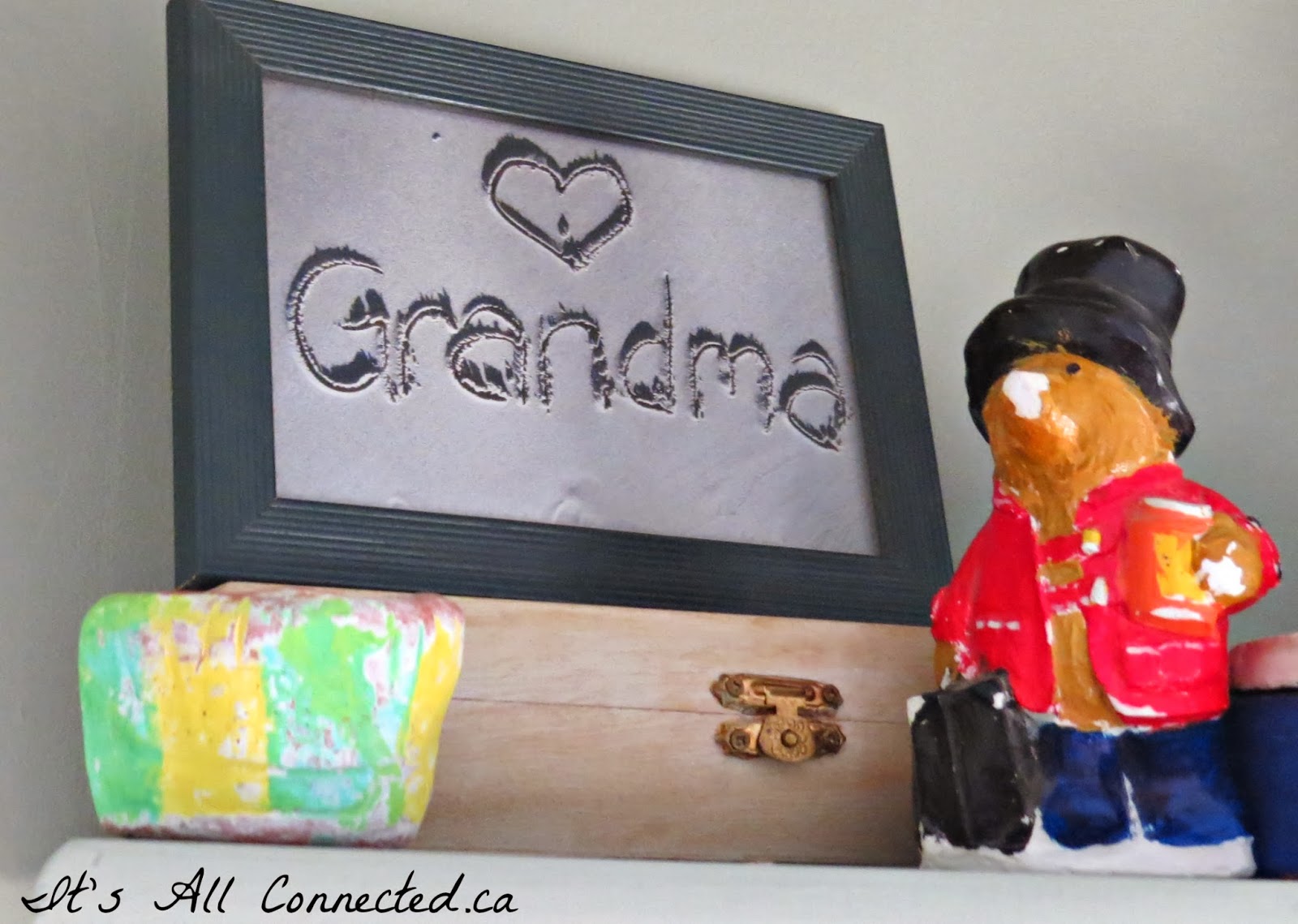 Every item recalls a story to me.

The sandcastle my youngest daughter gave me, commemorates the time when she was only three and the kids in the playground weren't playing with her.  I sat with her in the sandbox telling stories I made up until, one by one, the kids came over to listen to the tales.  All the kids pitched in and we built an enormous sandcastle for the fairies to live in.  The most pugnacious of the boys scoffed at the idea of fairies.  We lived in a townhouse complex where the bedrooms in all the units looked out over the playground.  I told the kids to look out their window that night and check to see if any fairies had moved in.  After dark, my husband sneaked to the castle and lit a candle inside.  All around the complex you could hear oohs and aahs.  The problem of the bullying kids was stopped. 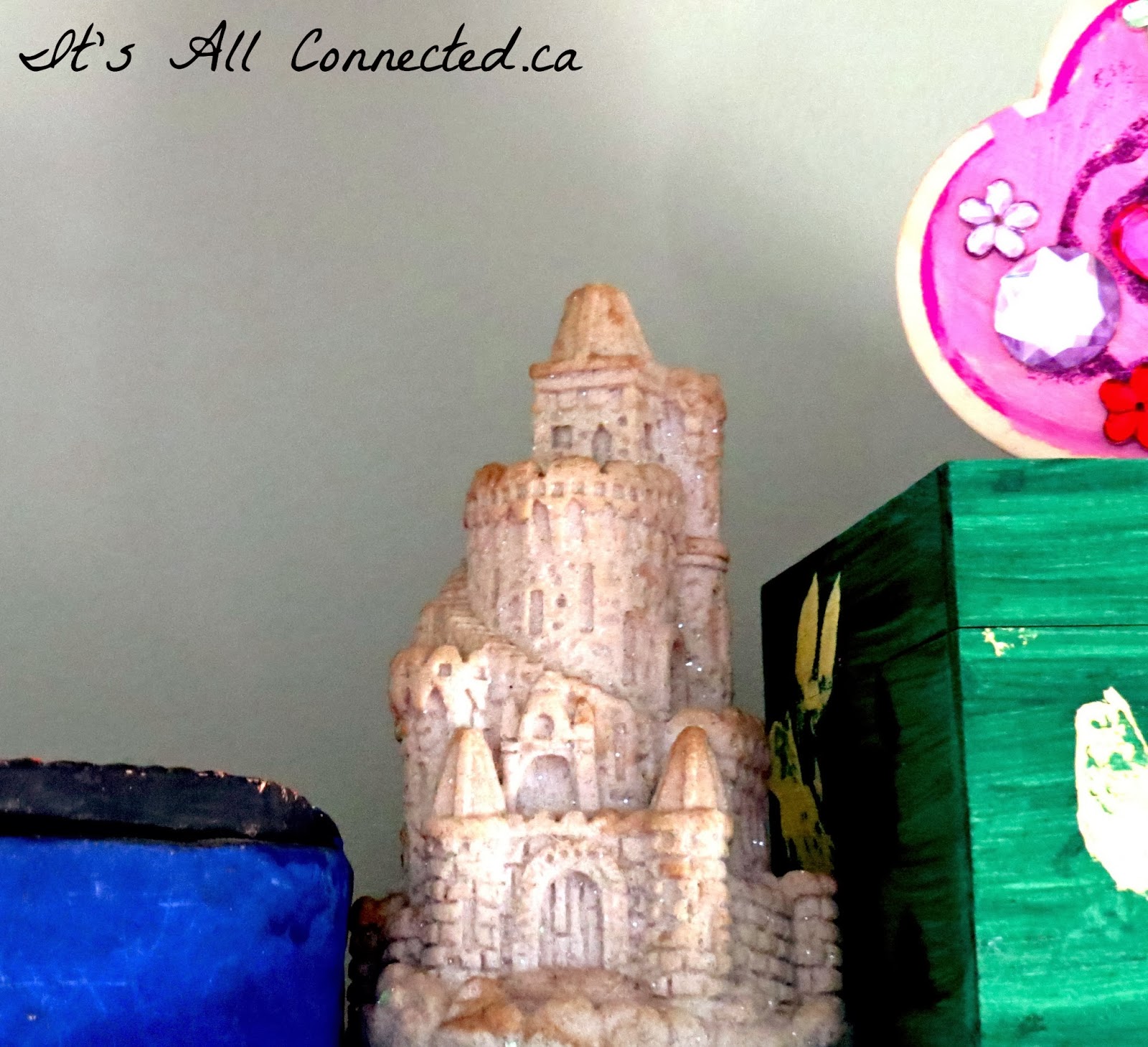 These gaily decorated boxes are the first thing four of my grandchildren gave me when they adopted me as their grandmother.  Sure their adoption was already finalised, but that didn't mean they accepted me as their grandmother.  In their years as foster children, they'd had lots of 'grandparents'. It didn't mean anything permanent to them.  The day I knew I was accepted was, oddly enough, when I'd been babysitting them for weeks while their mother recovered from a severe seizure.  They acted up one morning and were going to miss the school bus.  Let's just say I was firm with them and hauled them down the laneway in time for the bus.  The new driver asked the kids who I was and a very disgruntled four year old granddaughter said, "Oh, that's our REAL grandma". 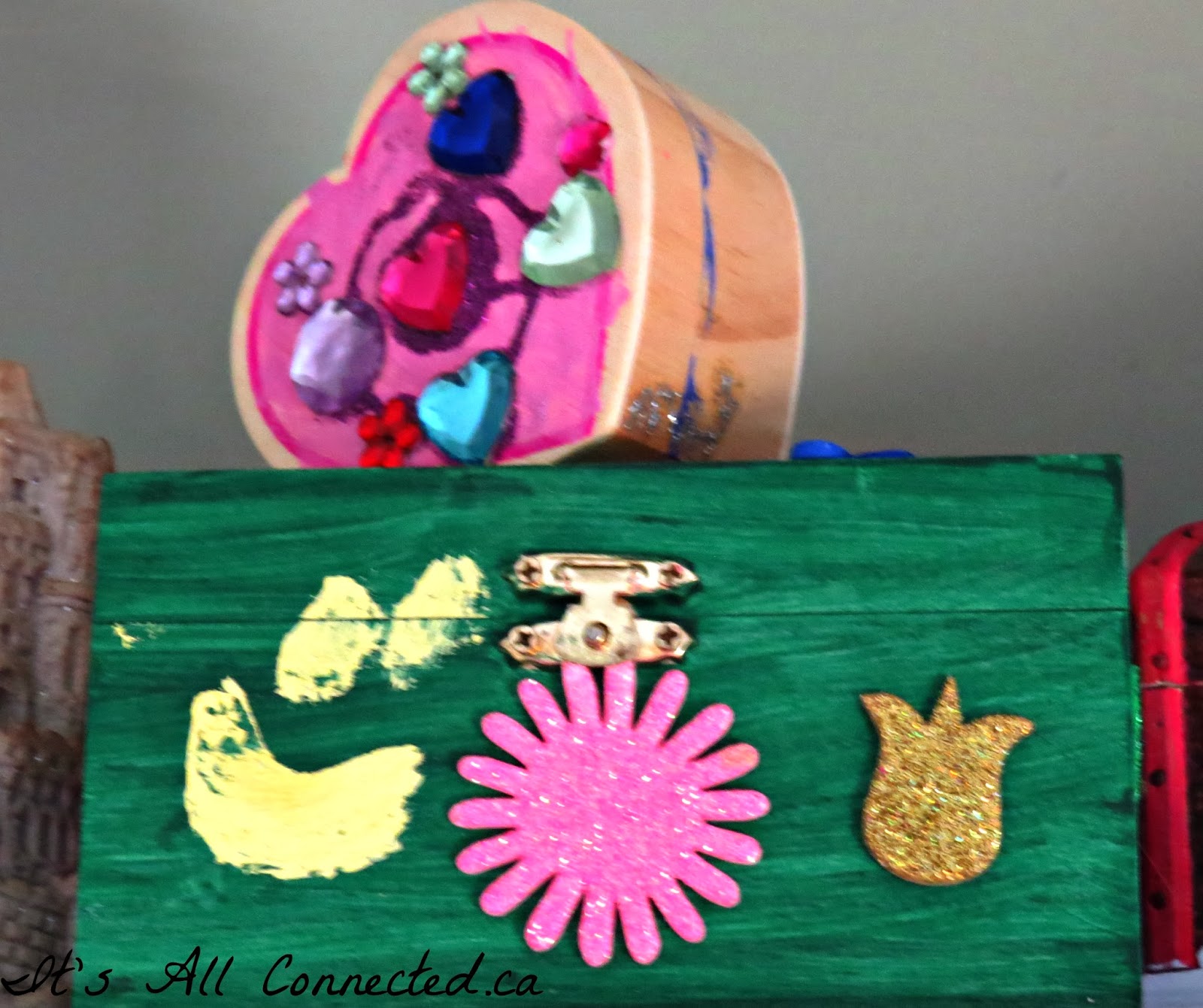 They've written love notes and put them in the box.  A sweet surprise was the two teenage grandsons adding their own notes. 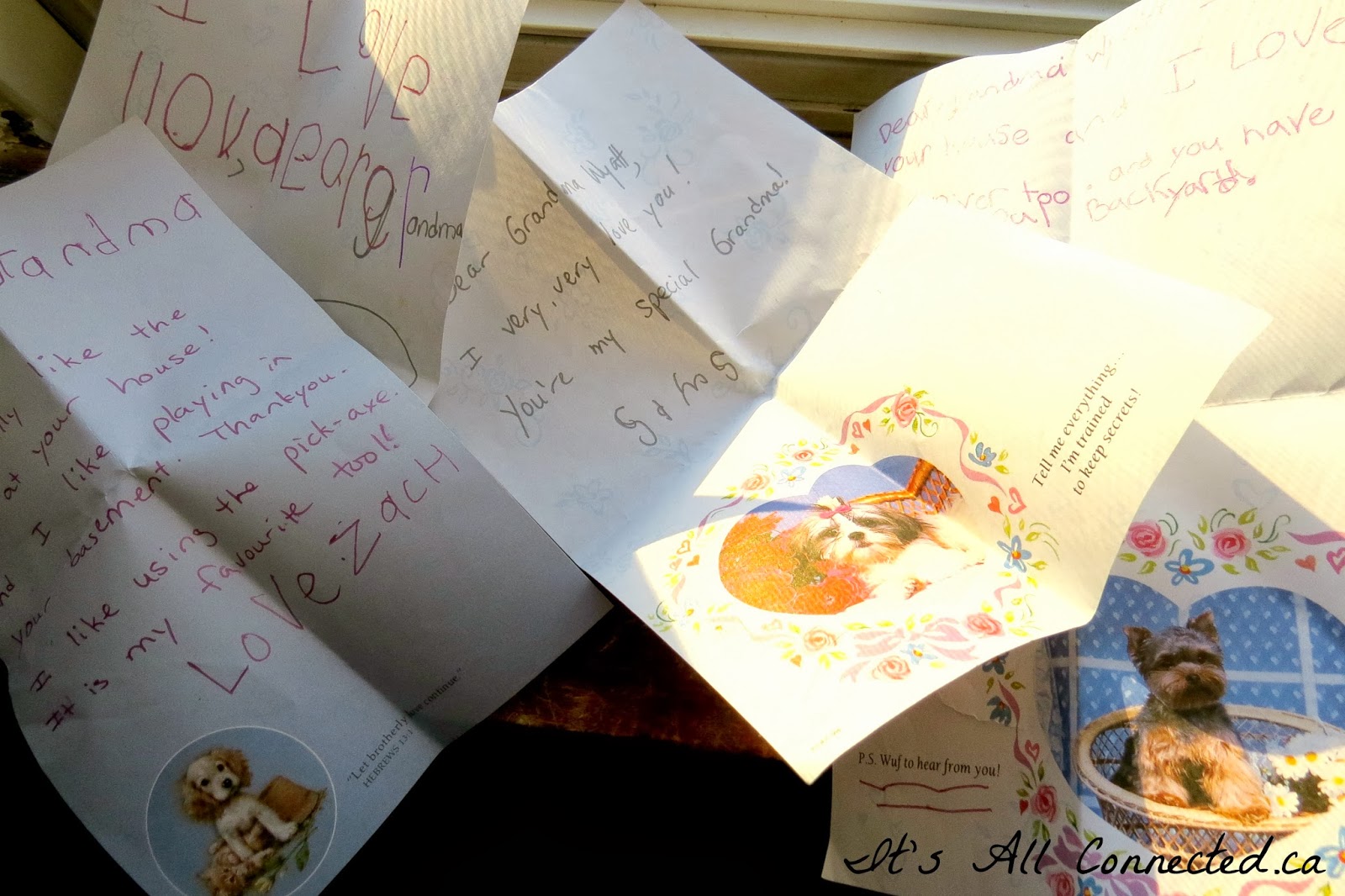 If you are actually peering at those notes to read them, I can explain the part about letting them use a pickaxe.  Honestly, I can!

This shelf is full of memories and love to me.  Every wobbly or chipped bit of pottery, every lavishly adorned box and every dime store ornament outshines any jewel or precious metal I was ever given.

I'll need to save a little space on it for when I've earned a treasure from this little one that is on it's way to us.  Today it is official and Baby is going to be a big sister! 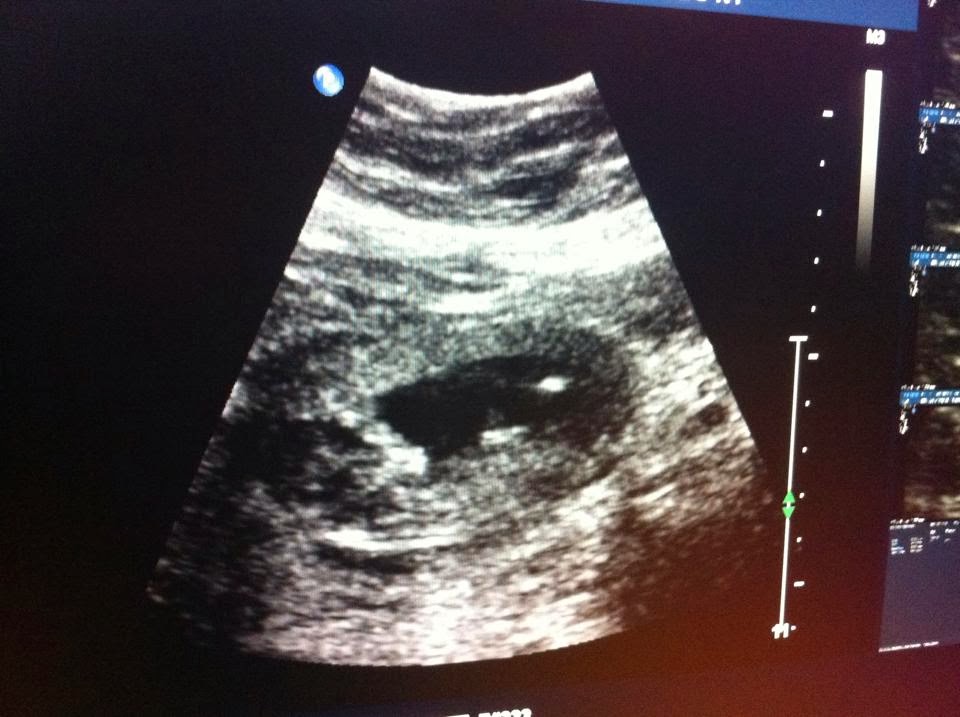 It may not be the ultimate in home decor high fashion, but this shelf puts a smile on my face every time I enter the bedroom.

This Valentine's Day, gather up all the love in your life and put it on display!
Posted by Maureen Wyatt at 03:33

Email ThisBlogThis!Share to TwitterShare to FacebookShare to Pinterest
Labels: The House, Valentine's Day