I Really Liked You Gordie Howe!

Yesterday, Gordie Howe, Mr. Hockey passed away at the age of 88. 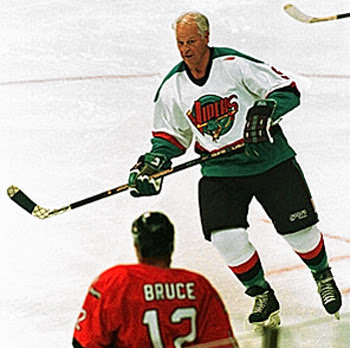 I was lucky enough to get to know Gordie and have some insight into what makes a truly great and memorable athlete. He was one of the finest examples of commitment and dedication to a career, a sport, a team and the fans that made it all worthwhile.

His accomplishments as a hockey player and pride of Canadians are well known.

We met when he was retired and came to my recording studio to do the voice overs for some commercials. I was used to working with stars of the music world, television stars and film producers. It was all in a days work.  But, for a girl who grew up in Northern Ontario, the chance to watch a hockey legend record was awe inspiring. These players were the idols of kids, especially those growing up in out of the way, economically disadvantaged areas. If you could play like Gordie Howe, you could get out of going miles underground to eke out a living in the nickel mines and young boys collected hockey cards and dreamt of the day they'd wear a Stanley cup ring.

I snuck away to a phone and called my dad. "Guess who's in the studio? Gordie Howe!!!"  I only called my dad about a client one other time and that was when Johnny Cash was there.

The studio control room was overcrowded with anyone from the advertising agency or business hiring him for the commercial who could possibly find an excuse to be there. I went to my office and carried on answering phones and doing the boring business side of things.

During a break for editing, there was a tap on my open door. It was Gordie. My assistant had directed him to my office a place to get away from everyone. He was a shy man and not comfortable with all those business types. Many a rock star had hidden in there to escape record company executives.

I told him to make himself comfortable and carried on with work. He picked up an acoustic guitar and ever so quietly picked out a few notes. I told him the sound wouldn't carry to the control room and it certainly wouldn't bother me if he played.

"You don't want to hear me play with these awful old hands."

I looked at them and saw how deformed they were from arthritis and broken bones.

"Go ahead and play. I bet I've heard worse. You hear music after we've fixed it up for them."

That's the moment when we became comfortable with each other. Over the next few days, he stayed in my office as much as he could. We chatted about growing up in a large family, his childhood in Saskatchewan and my relatives in Alberta and all that prairie life entailed. We talked about sports and the entertainment business as the dream for so many kids as a way to live the good life.

Artist James Lumbers did a painting of Gordie showing his mom helping a neighbour out by giving her a bit of cash, she couldn't spare, in exchange for a gunny sack of used items. Inside that sack was Gordie's first pair of skates. 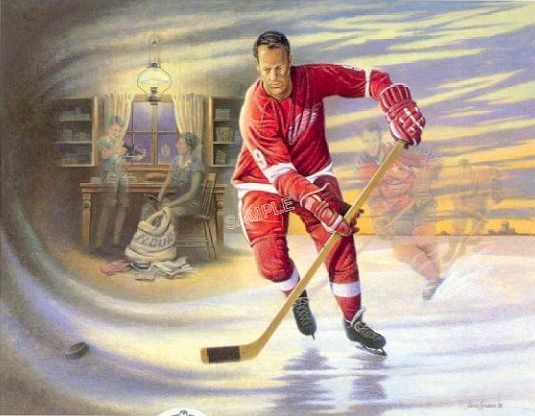 We talked about my home in northern Ontario and how I loved the forests and rivers and all the wildlife that had surrounded me. In the early days of radio and television, players didn't benefit from all those advertising dollars that hockey games earned. They didn't make enough to live on and had to work at something else during the down time. Most played other professional sports. Gordie worked at a fishing lodge in the summers as a guide and pro angler.  He loved fishing but hated being away from his family for months on end.

A few months later, Gordie was back to record another commercial and back hiding in my office. While we talked he glanced over at a hockey stick sitting in the corner. He picked it up tried it for balance or whatever players test sticks out for. Halfway up the stick was electrical tape wound around to make a barrier to the stick flying out of the players glove.

"Who's stick is this?"
"My grandson's."
"You better break him of that habit."
"What habit?"
"That tape part way up the stick. You start in with bad habits like that and you'll never play well. You tell him I said so!"

"Um, Gordie, he's only two. the stick is going to be cut off above the tape."

We laughed and he asked if I wanted the stick autographed.

The year was 1997 and Gordie Howe, Mr. Hockey, was signed to play one shift for the Detroit Vipers, making him the only player to officially play NHL hockey for six decades. He was 69 yrs. old.

The signed stick was never cut. My grandson still has it. And, I never forgot that modest, shy and genuine man that played a game he loved and made it better than it had ever been before.
Posted by Maureen Wyatt at 18:34