Where has the last month gone? Gone to KIDS is where!  My one day a week babysitting two toddlers job got somewhat expanded when the original babysitter quit. It's going to get much easier next month. The kids turn 2 and 3 in May and I'm expecting their birthdays to turn them into rational human beings.

Then, I'll be back to blogging full force. Do not wake me from this dream! I haven't been spending much time online for two reasons. First, I only to want to fall asleep or drink wine and fall asleep or pretend I'm watching a movie and fall asleep when the girls go home. On the days, I'm not babysitting and my special needs grandson isn't staying with me, I vacuum. All three generate enormous amounts of debris. The second reason I'm not online is that only toddlers can hear a laptop cover being raised. That sound penetrates their super sonic hearing from two rooms away and makes them rush in to start helping me. They can even hear the laptop lid while totally engrossed in the most riveting episode of the

With a whole weekend to myself, I was excited to do some writing. Hmmm - what to write about?

My blog trendy framed chalkboard in the dining room has degenerated into an ever changing piece of modern art. ~ 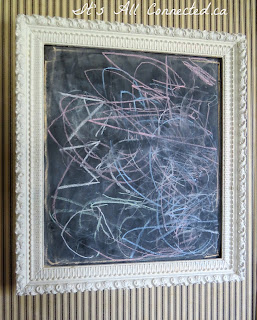 I don't think the new decor look will get many Pinterest pins.

The course I'm taking in anthropology. The Study Of Humans Under The Age Of Three 101, is fascinating. My minor is Pokemon And The Fifteen Year Old Boy.

I'm making great progress in learning the language. Occasionally I speak the language to adults.  I'll call a granola bar a Bobby Boke, a cat a Tzsee tzsee or a butterfly an applefly.

Applefly was Thursday's lesson. No matter how many times the youngest one asked me or how many ways I tried to get her to explain what she wanted, the word was escaping me. She buried her head in her blanket, cried huge crocodile tears and said, "I just want the applefly".  I carried her around the house asking her to point to the applefly. At the fridge we hit paydirt! 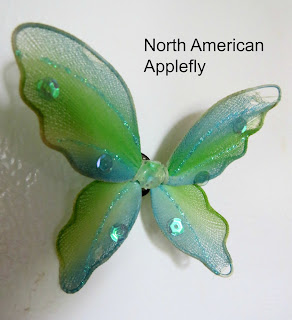 Their mom has been reading her an alphabet book. A is for apple. B is for butterfly. She seems to have mixed the two pages up in her mind. When studying the Under Age Three Human be aware that they do not appreciate hysterical laughter at their expense.

Their society has complex rules of etiquette and social mores. Most of these revolve around ownership.

The traditional toddler foods are well received unless said child has specifically asked you to make that food. Then, it will be rejected when it arrives on the table. ~ 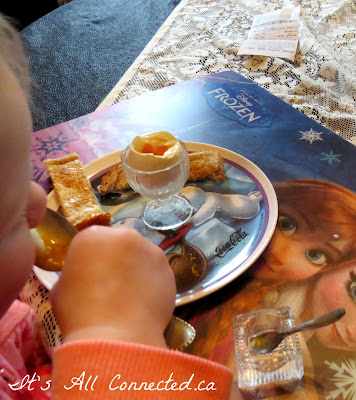 Under NO CIRCUMSTANCES should you allow another under age three human to eat the rejected food. Do not think repeated assurances that the first tot doesn't want the food actually means they are willing to give up ownership of the food. The result is inconsolable crying. The second tot doesn't care if the first one is crying and will make a great show of eating it in front of them. By now, they have ownership of the food and will not give it back. Forcing a return of the food results in inconsolable crying. You may, however, give the unwanted food to the chickens. Perhaps they have a pact with chickens where they return unwanted eggs to the original giver. 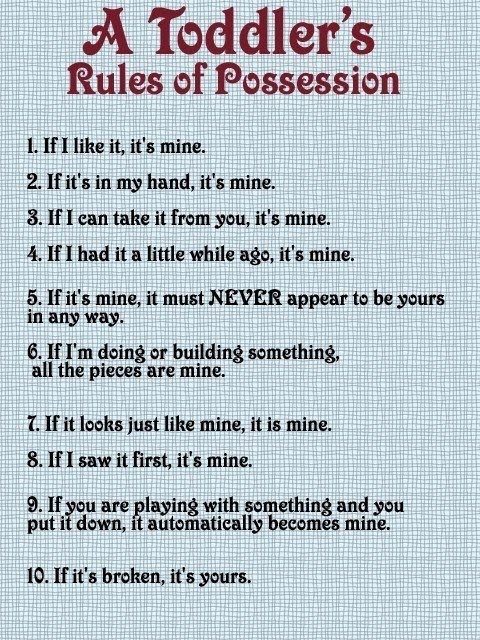 Do not believe advertising that says the members of this society will play with new toys. They will ignore them and go back to playing with a wooden wagon full of blocks that you paid $2 for at a thrift shop. ~ 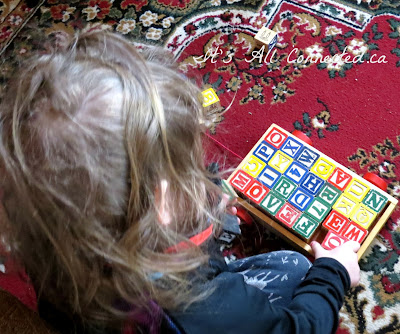 Or, make you draw the same picture of a cat over and over again on a $ store magic writer. They will return the favour by drawing you a monster. ~ 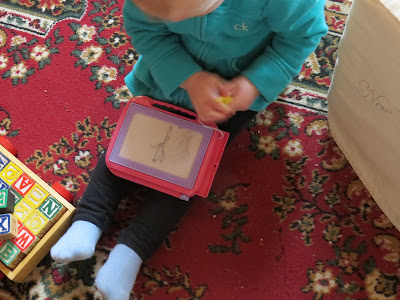 The human under the age of three does not like to follow directions in craft kits. They do like to be amazed at helping you make a dolly bed out of a tangerine box and a scrap of flannel. They are, therefore, free-form artists. They are not willing to share the dolly bed with each other but happy to let the cat sleep in it, carefully covered with the blanket. 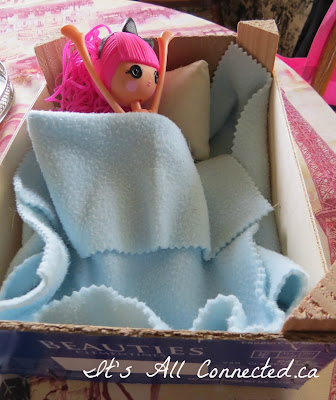 So much to learn and so little time! In the blink of an eye, they will change entirely and I'll be on to studying the next phase.

They are learning too. They know I won't give them sugary foods. They've learned they are hidden in the house somewhere and they can access them by using the potty. They've learned that any transgression or tantrum is instantly forgiven if they climb up on my knee and smile like a cherub. Even the cats will forgive a poke from a plastic dinosaur if they give them a pat and a kiss.

Maybe, just maybe, I'm getting the hang of this thing.

But why, oh why, did I retire from interior decorating!