Recognition For The Servicemen Sent To Buchenwald 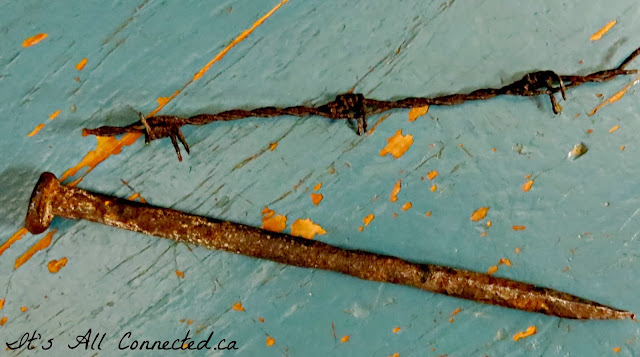 "I'm twenty years old and I'm alone somewhere near Paris, in occupied France.  I know this is bad but what I don't yet know is that I am about to become a Holocaust survivor, one of 168 Allied servicemen that were sent to Buchenwald concentration camp."

With those few words Canadian WWII veteran, Ed Carter-Edwards VE3 MWC, had my full attention.  I spent the next four days researching these 168 Allied servicemen of Buchenwald, one of the first and largest concentration camps.  It is a story that was suppressed for forty years, until the surviving servicemen broke their silence and demanded they be heard. 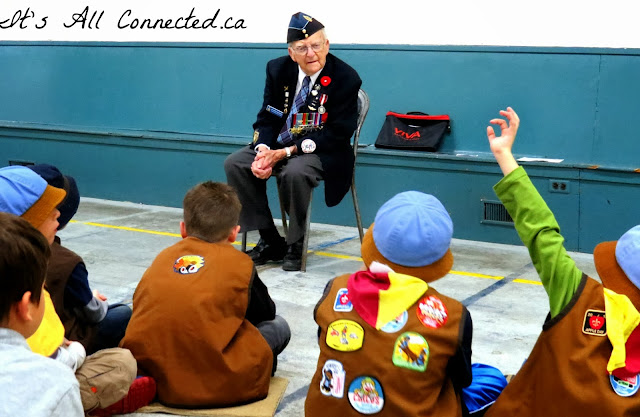 has opened my eyes to a travesty of justice for the servicemen who suffered so much for the Allied forces. Because of the extreme youth of the Beavers, Ed focused his talk on being shot down on his 22nd mission as a wireless operator on a Canadian Halifax bomber, November 28, 1944 and hiding until hunger drove him to make contact with two French women working in their garden. The women risked their lives to put him in touch with the French Resistance.

The flight crew of Lion Squadron 427 ~ 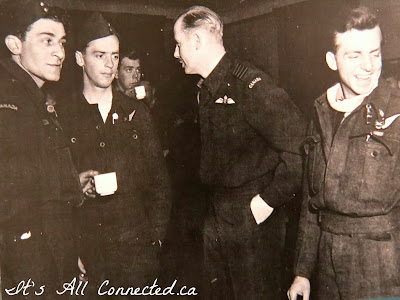 The boys wanted to know what each and every medal he wore stood for. ~ 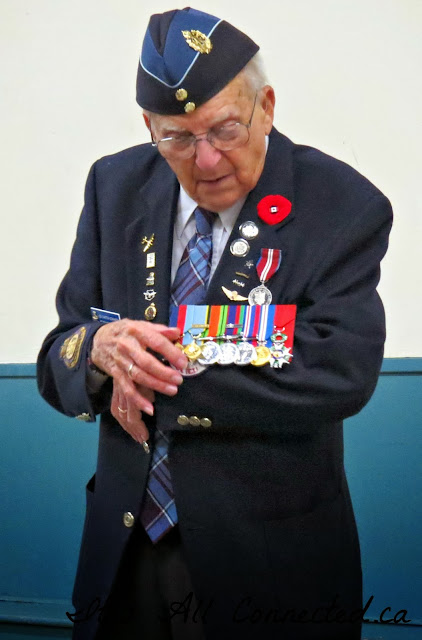 The French Resistance gave Ed new identity documents and civilian clothes, hiding him until their driver could smuggle him out of France.  It would be an exciting story of a dashing young airman if the driver hadn't turned out to be an informant that was turning all 168 airmen and the young French couple that assisted them over to the Gestapo.

Instead, it became a story of fear, courage, despair, hope, betrayal and survival.  Ed was arrested and his dog tags thrown away.  He is denounced as an enemy spy and thrown into a Paris prison instead of a POW camp.  For five weeks he lives in overcrowded, flea ridden conditions and tries to keep his sanity through the screams of the tortured resistance fighters.  He discovers he is one of 168 servicemen held there against Geneva Convention rules.  A directive has come from "high up" that all Allied airmen, that do not turn themselves in voluntarily, will be treated as spies and denied all rights.

After five weeks, servicemen from Britain, USA, Australia, New Zealand, Canada and Jamaica are put in boxcars with all the other detainees and spend a horrific five days travelling to Buchenwald.  As they enter the camp, a guard points to the black smoke pouring from the chimney and tells them the only way out is through that.  Their hair is shaved off and they are sent to a separate compound where they will stay without shoes or shelter for three weeks.  By all accounts, they are treated worse than the other concentration camp prisoners.  Sick, weak, injured and starving, they acknowledge the senior officer being Phil Lamason of New Zealand. He organises them into groups based on country of origin and has them elect a leader for each group.

His first address to them is as follows. ~

"Attention!   Gentlemen, we have ourselves in a very fine fix indeed.  The goons have completely violated the Geneva Convention and are treating us as common thieves and criminals.  However, we are soldiers.  From this time on, we will conduct ourselves as our training has taught us and as our countries would expect from us.  We will march as a unit to roll call and we will follow all reasonable commands as a single unit."

Their best chance of survival is to stick together and maintain discipline.

For three and a half months all petitions to be transferred to a POW camp are rejected.  Two of the servicemen die.  Knowing they are all scheduled to be executed, Lamason manages to get a message smuggled out to the German Luftwaffe, informing them that there are servicemen in Buchenwald.  Under some pretext, two German officers arrive and speak to the Allied servicemen.  They make no promises because they say they, "Don't do well with these people", but they carry the message back.  General Hermann Goring, himself a WWI fighter pilot, receives it and is enraged that they are there.  With only six days to spare before execution, the airmen are transferred to Stalag Luft III.

They have survived unimaginable horror and deprivation.  They have seen and endured the most terrible example of man's inhumanity to man.

As he holds a piece of barbed wire and a railroad spike from the line going into Buchenwald, Ed Carter-Edwards face changes from jovial and outgoing to a look of pure pain. ~ 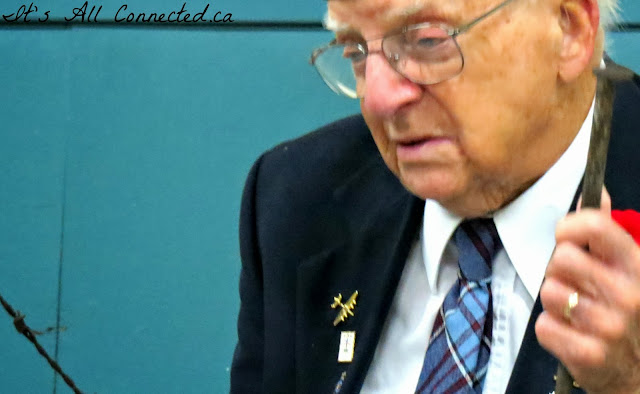 I'm telling you his story on this November 11th because none of these servicemen were acknowledged as Holocaust survivors in their home countries.  Some were told not to talk about it by the military.  Some were not believed and gave up talking about it so they wouldn't appear to have "lost it" over there. It was forty years before a few of these servicemen met up at a meeting of POWs, found their voice, and started really telling their story.

As they aged and needed extra medical care, they were denied compensation from the funds set up for Holocaust survivors. Ed had to obtain proof from German records that he was prisoner #78361 Buchenwald to satisfy his own Veteran's Affairs Office. More than anything, they felt the rejection of not receiving the respect they were due for their exceptional suffering in the line of duty.

As I talked to him after his speech, Ed winked at me and asked I was a sh*t disturber.  ~ 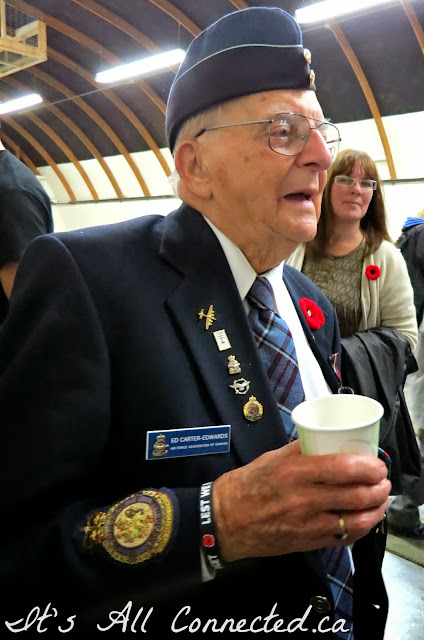 I told him that, on occasion, I can be.  This is one of those occasions.

They are still fighting for recognition.  If you are a citizen of Britain, USA, Australia, Canada, New Zealand or Jamaica, I urge you to ask whether your members of the Buchenwald 168 have received the recognition they so justly deserve!