I thought I was making my life easier by getting young chickens instead of rehabilitating old lay hens. WRONG!  Why did I not think about those terrible teen years?  Shouldn't the teenage bench wrecking, paint scratching, into everything cats have clued me in to potential problems with young chickens? Apparently not!

It was like trying to keep Bart Simpson penned up. ~ 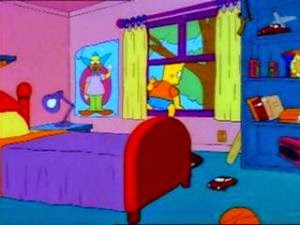 All of my chickens, young and old, are convinced the bugs are much better on the other side of the fence.  They scoot through to next door and hang out under their pine trees. ~ 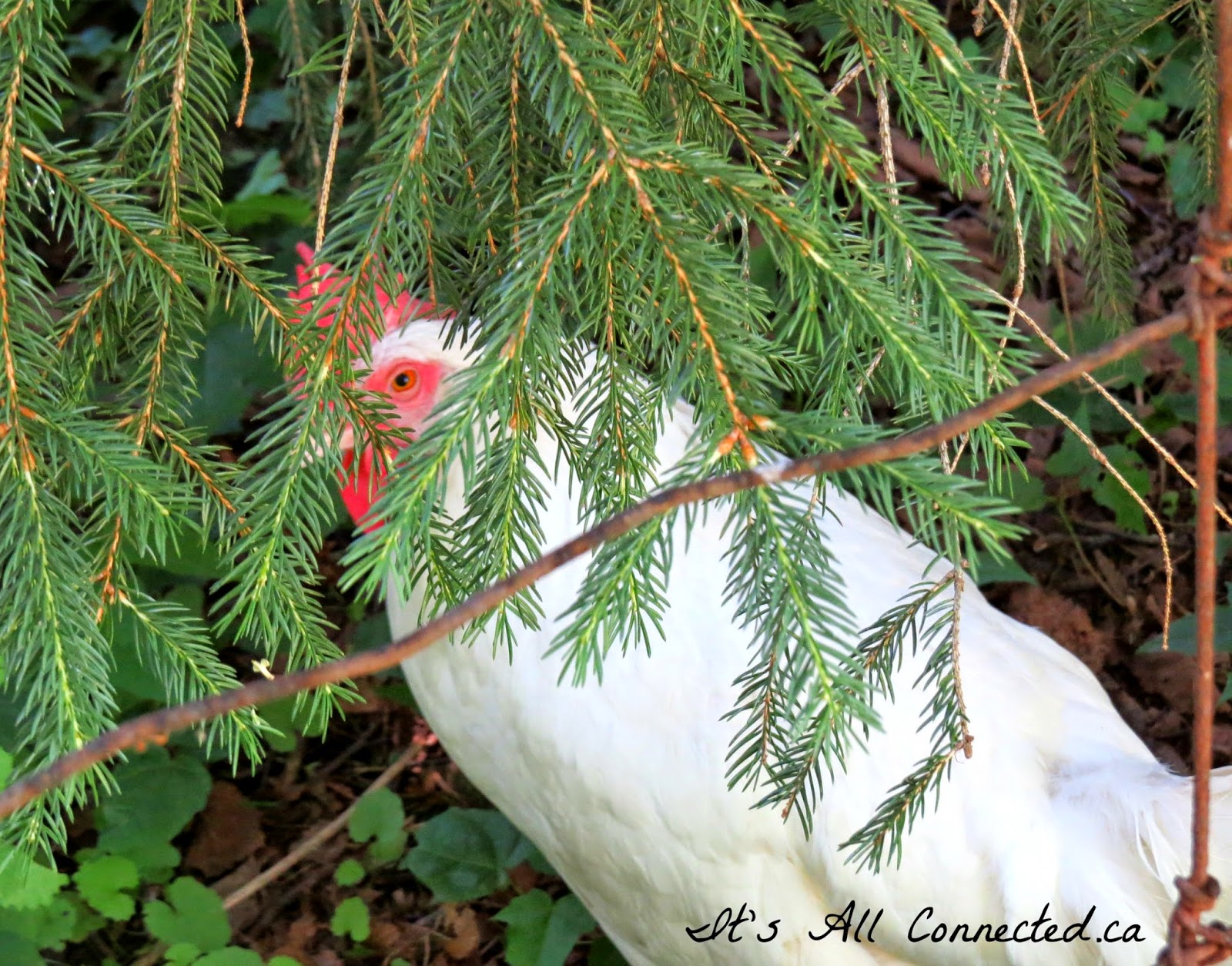 The neighbours did mention that they had to chase them out of the petunia beds but didn't seem too upset about it.  They thought it was cute that the chickens were trying to get into their pool area. So far, so good.

And then, the new girls started rampaging through their yard!

I blame Rukmini for it.  She's a saucy girl and doesn't listen to a word I say. She's the white gal getting ready to push Vivian and Anne away from the feeder. ~ 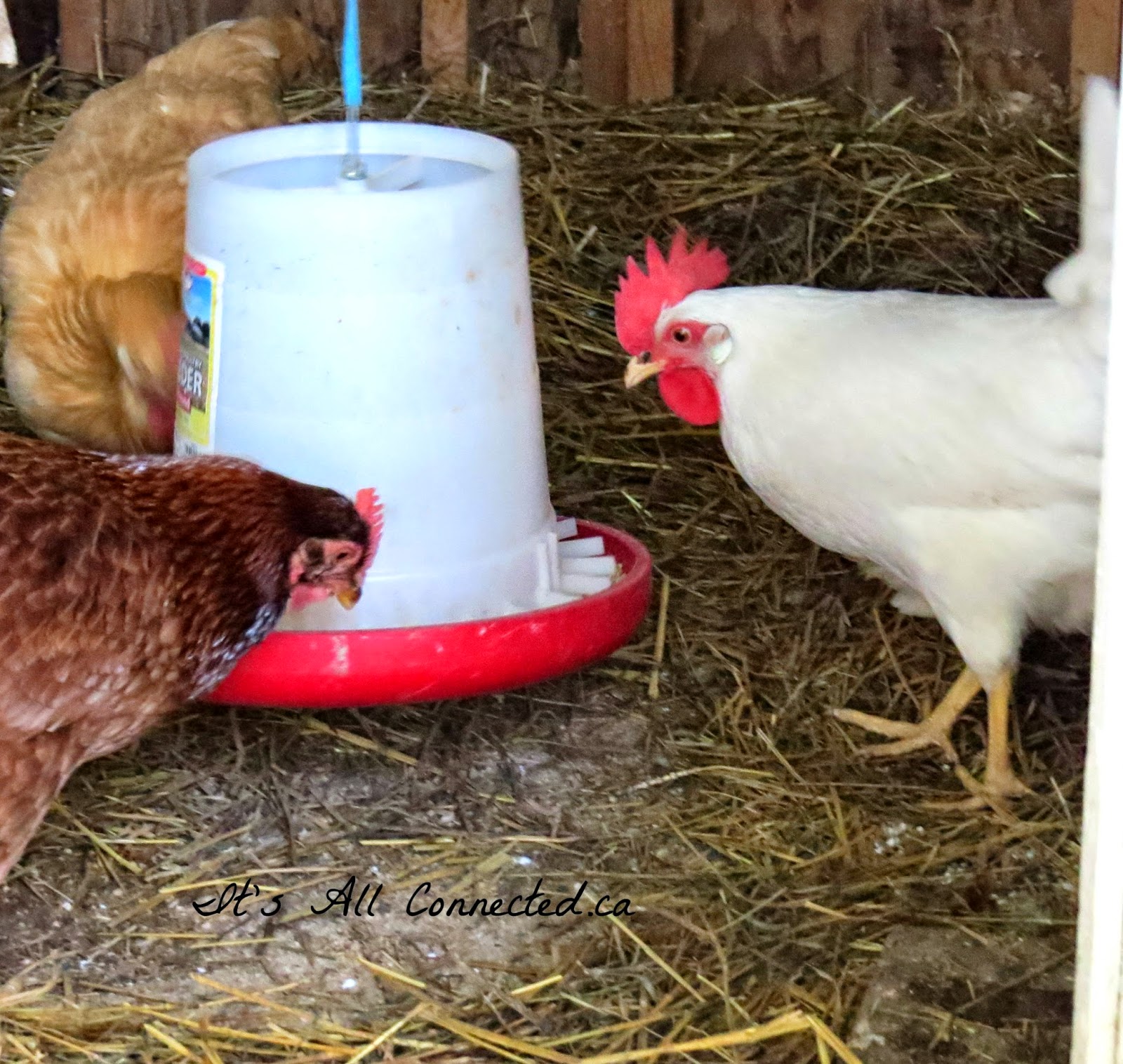 Wherever Rukmini goes, Elizabeth follows. Isn't she the cleanest chicken you have ever seen? ~ 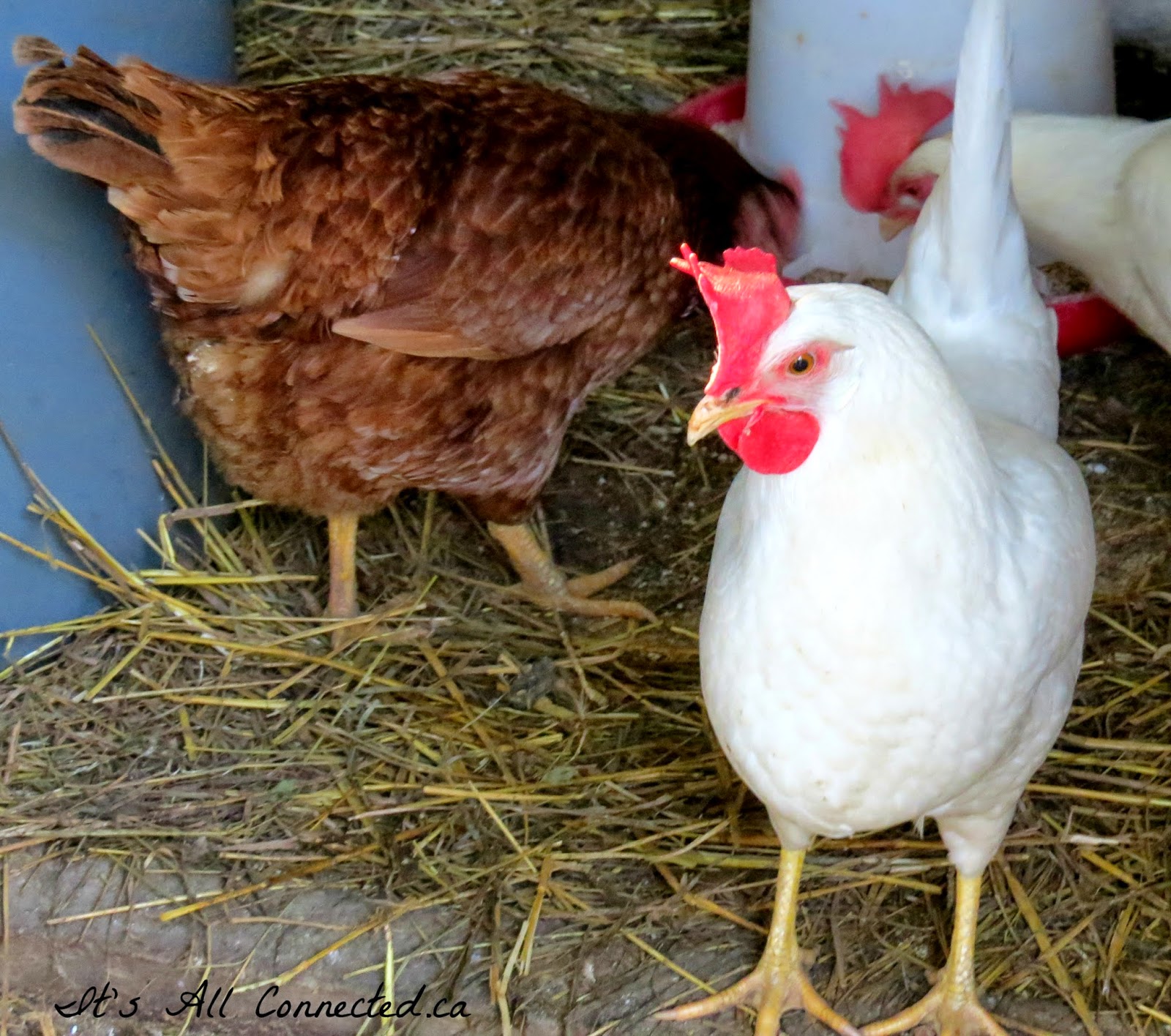 Even though most of you voted to name the third girl Clair, I liked the idea of naming her after my friend Mel's daughter.  I never go with the popular vote, which is obvious by my voting Green Party. We only got one seat in parliament last election, so that tells you how popular they are in Canada.

So, Madeleine she is.  She's quite shy but that doesn't stop her from getting into trouble. ~ 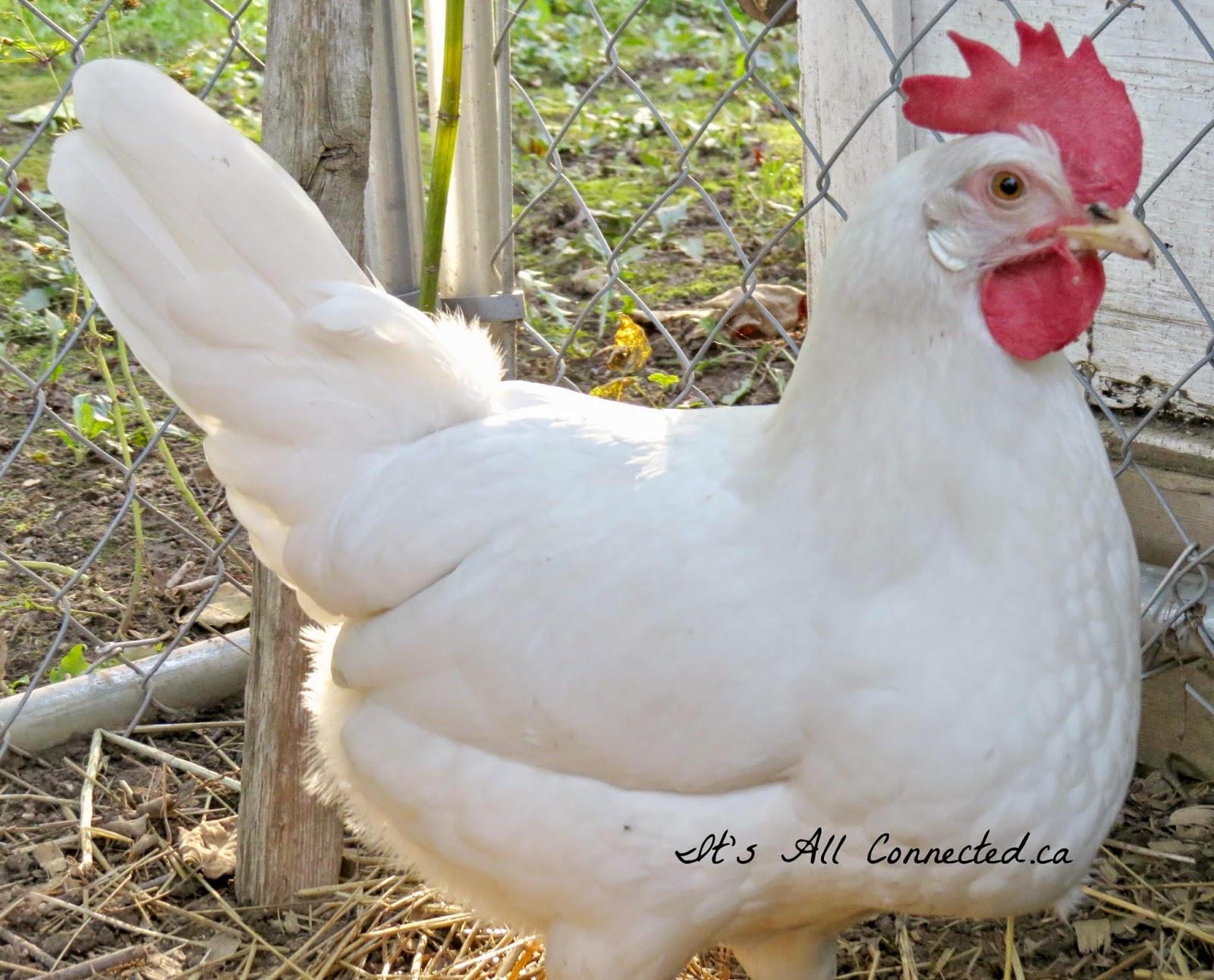 These three girls have earned me my first chicken complaint.  First, the woman next door told me they were eating the lower raspberries.  It's best to bluff your way through these things so I told her she was lucky she didn't have to bend over to pick the low ones.

The next week she told me they were flying up and eating the higher ones.  Ekes!

I do so want to be a good neighbour and told her I would keep them in chicken jail until the berries were done.  I was very good about only letting them loose when the neighbours were at work and wouldn't have a clue whether wild birds or chickens devoured the berries.  Don't judge me!  My chickens absolutely hate being penned up.

I left a peace offering on their porch with a cute chicken note. ~ 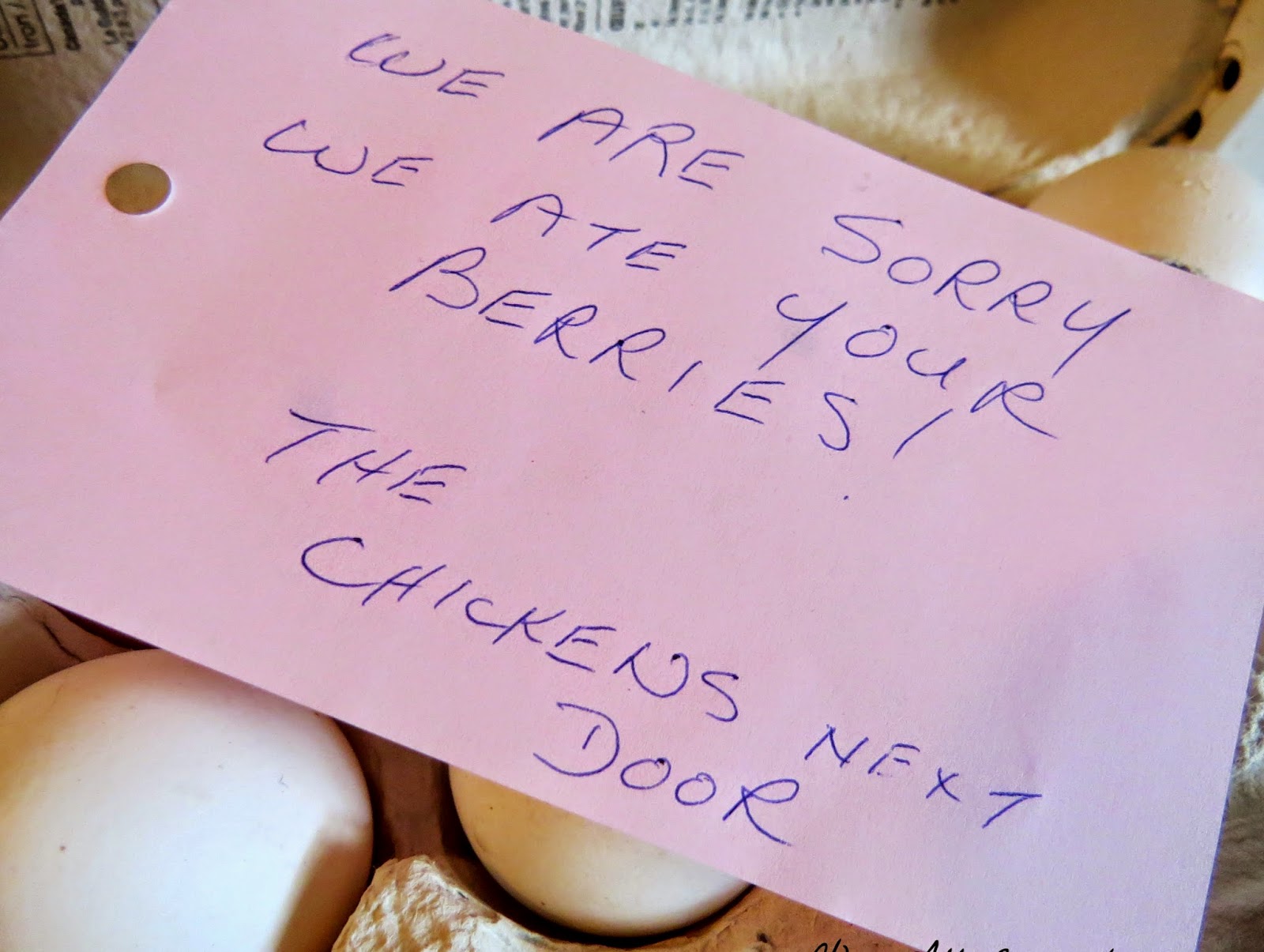 Everything would have been fine if the neighbour hadn't come home from work early, while the chickens were roaming free.  She thanked me for the eggs and said I didn't have to do that.  I made a cute comment about the girls wanting to make up for their bad behaviour.

Then, the neighbour said she had some lovely berries on the bushes today and would have to get them picked.  At that moment, we both looked over at the berry patch.  "Oh my!", said the neighbour.  The damned chickens had come out from under the pines and were flying up to gobble the berries!

I didn't even bother to try and smooth it over, just called the girls home and put them in detention.

For all I know, they may have promptly invited this guy into their bedroom. ~ 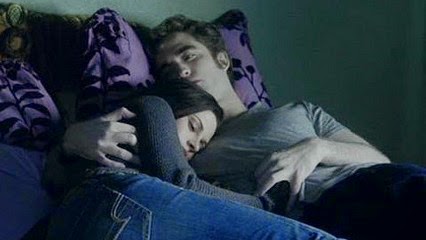 It's really best for all concerned to NOT know what teenagers are doing!
Posted by Maureen Wyatt at 00:56