Guess what I found in my chicken coop when I came home from dining at a friend's house last night?  I thought it very strange that Kay wasn't settled on her perch at 8:30 in the evening.  She's a stickler for an early bedtime and huffs and puffs at me if I'm late closing up the coop for the night.  She was pacing back and forth in front of the little quarantine coop.  As I reached down to pick her up and settle her in for the night, I realized my neighbour had delivered the chickens I was rescuing from an organic farm.

These poor ladies aren't laying up to commercial standards anymore and their days were numbered.

Vivian doesn't know what her fate was soon to be and looks unimpressed with the new digs. ~ 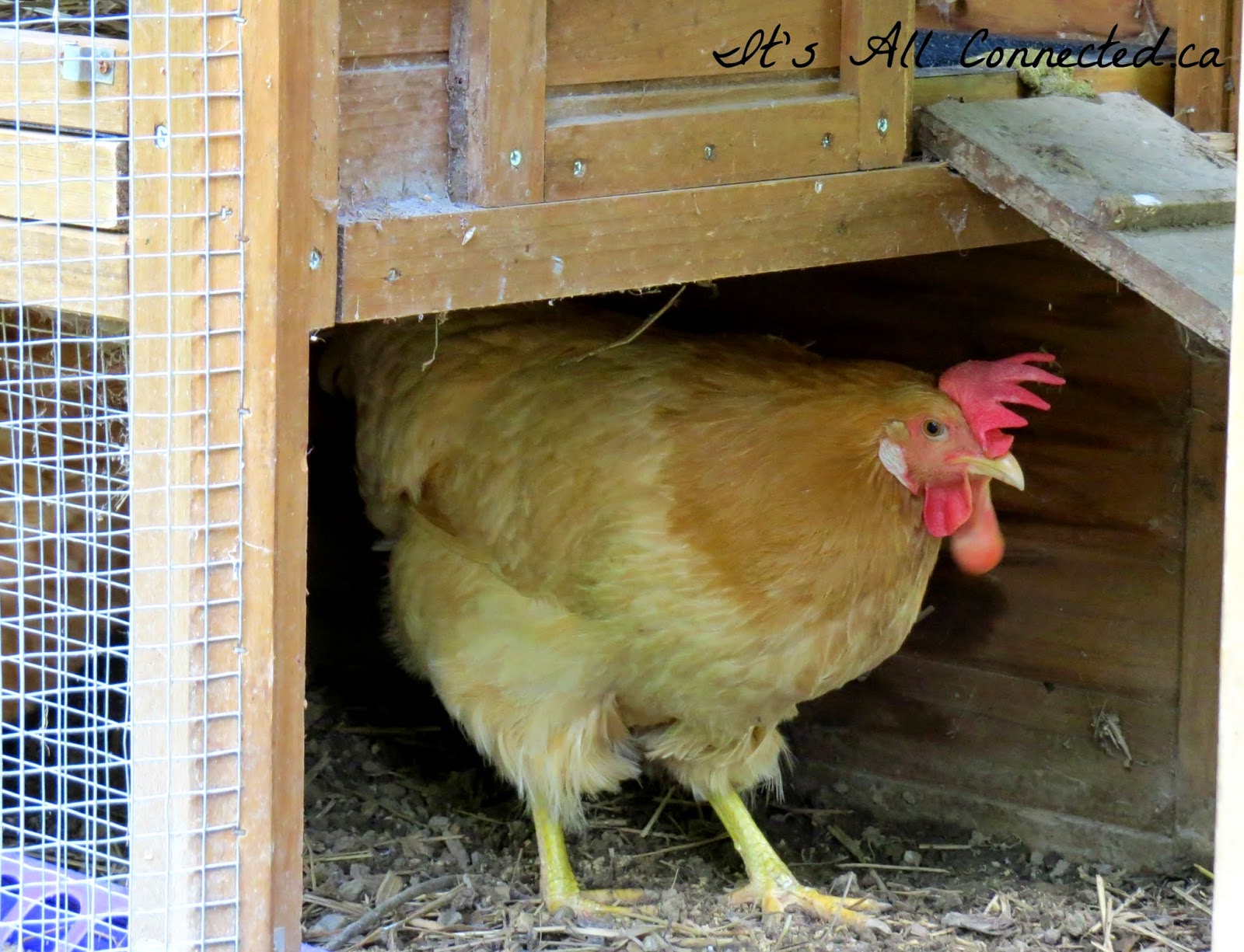 These are all heritage breeds and she may be an Orpington.  She's named after an aunt that had hair that colour.  I think Auntie Viv would be okay with that.

It turns out Viv is a bit of a troublemaker.  The teenage girl next door brought the chickens home from the farm for me.  Since I wasn't home, she was worried the chickens would be uncomfortable in the cat carriers. Her dad told her not to let the chickens out but she figured they were fine in her rabbit run, with a 4' fence.

Viv flew out of there in a flash and the other two followed hot on her heels.  Now Mom, Dad and all three daughters were chasing wild chickens all over the village.  They told me those girls can certainly run!  I would give anything to have a picture of the dad racing through back yards with a pink butterfly net!  Yep, that's what he did.  The mom was shouting directions like, "We all have to work together to herd them into one spot." and "Everybody stop running in different directions.  We have to fan out and force them toward the coop."  From the tone of her voice when she told the tale, I don't think anyone listened to her.

This is Josie and I'm plum out of aunts to name my chickens after.  Josie is the last. ~ 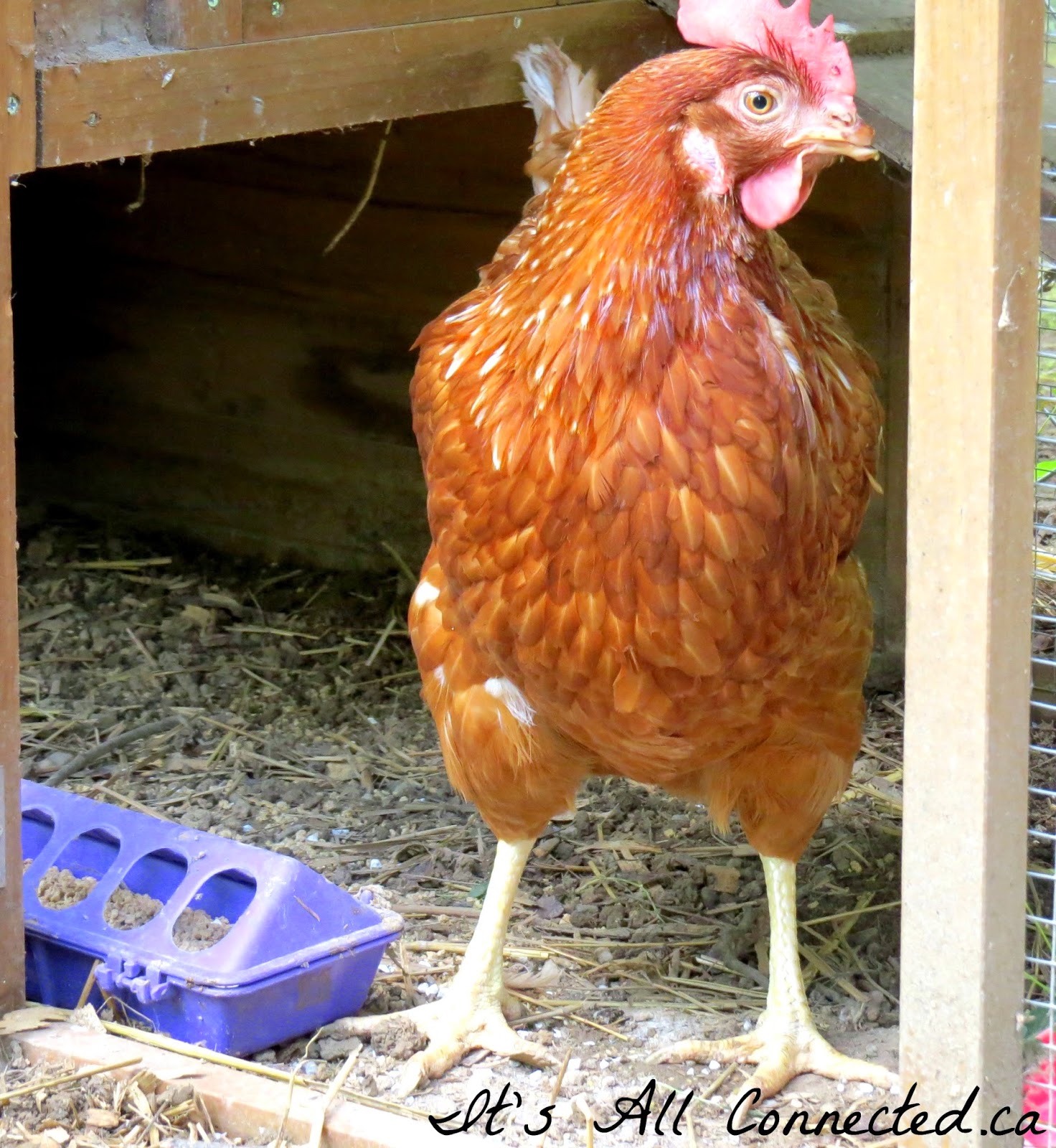 I think she may be a New Hampshire Red and they are noted for their aggression.  I can certainly tell you she gives a mean bite if you try to take an egg out from under her!

Just as I was out of auntie names to use, my niece asked if I would name a chicken after her some time. Wish fulfilled!  Meet Camryn and she's just as sweet tempered as my niece. ~ 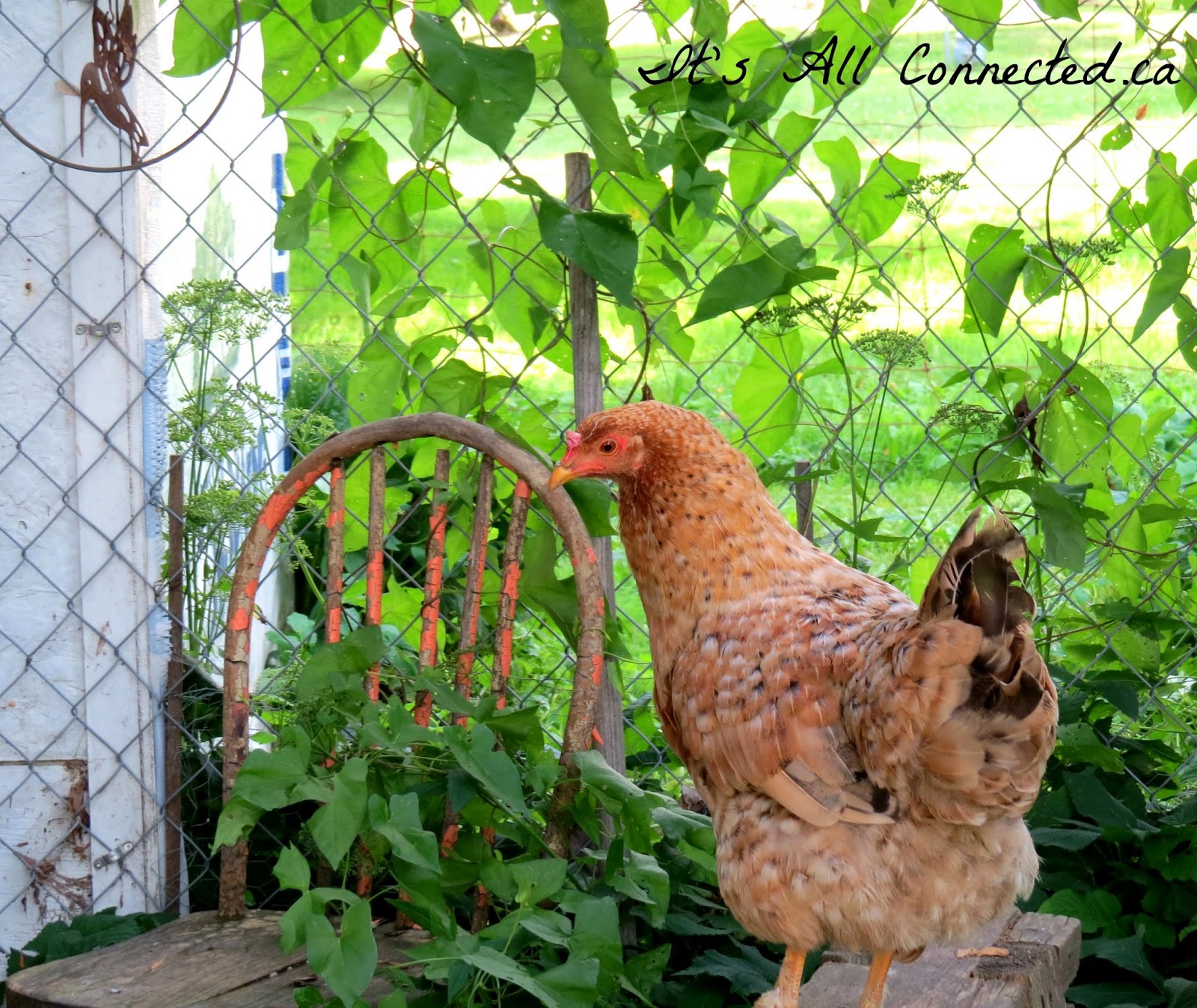 Kay and Ann are not pleased to be locked out of the run while the new gals get some exercise. ~ 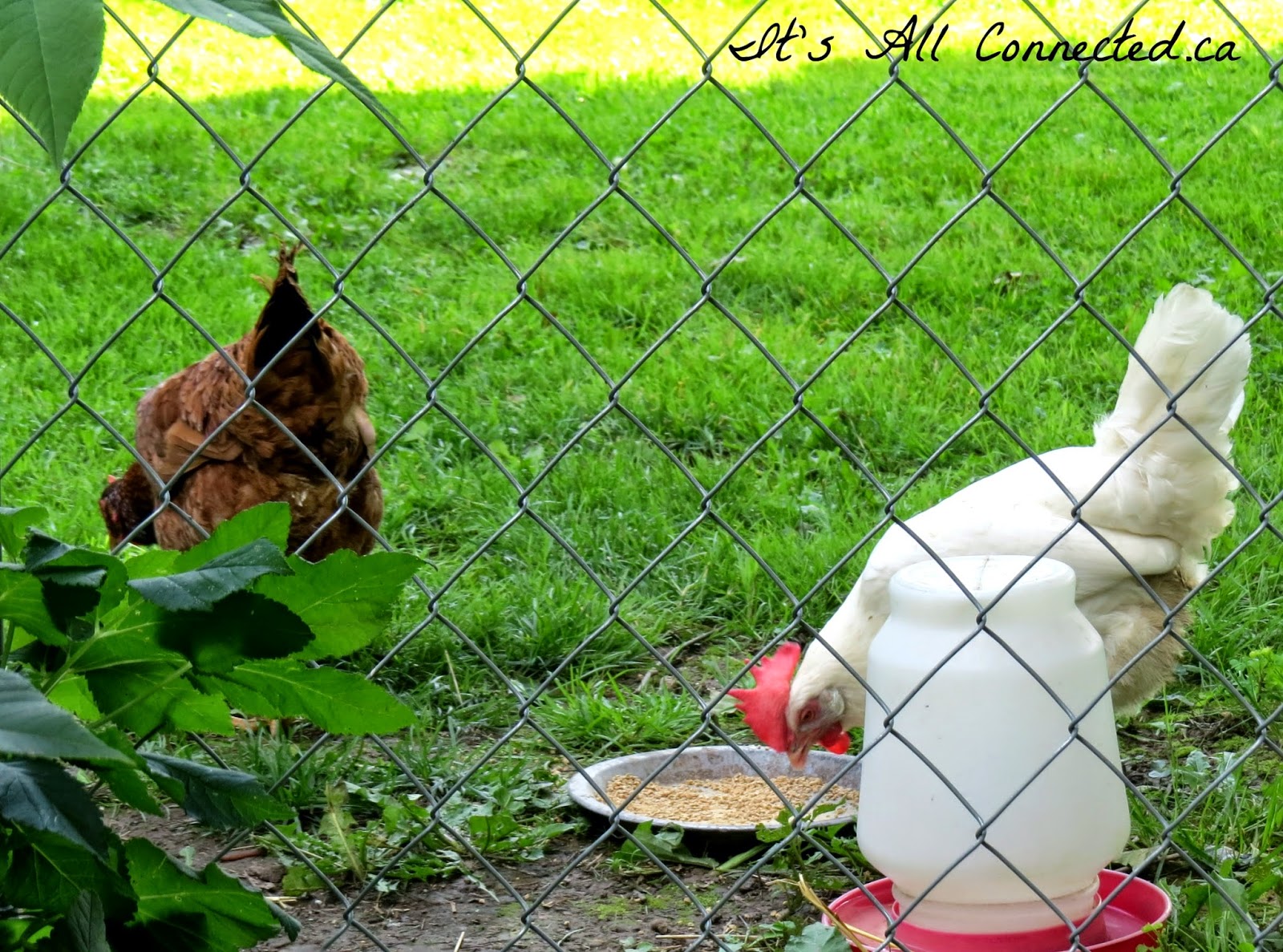 I'm pretty sure they were muttering about the indignity of having their supper al fresco.

For the next week I'll be shuffling chickens in and out of that run throughout the day, until they get used to each other.

In the meantime they have to content themselves with fluffing up their feathers and standing as tall as they can while they peck each other through the fence. 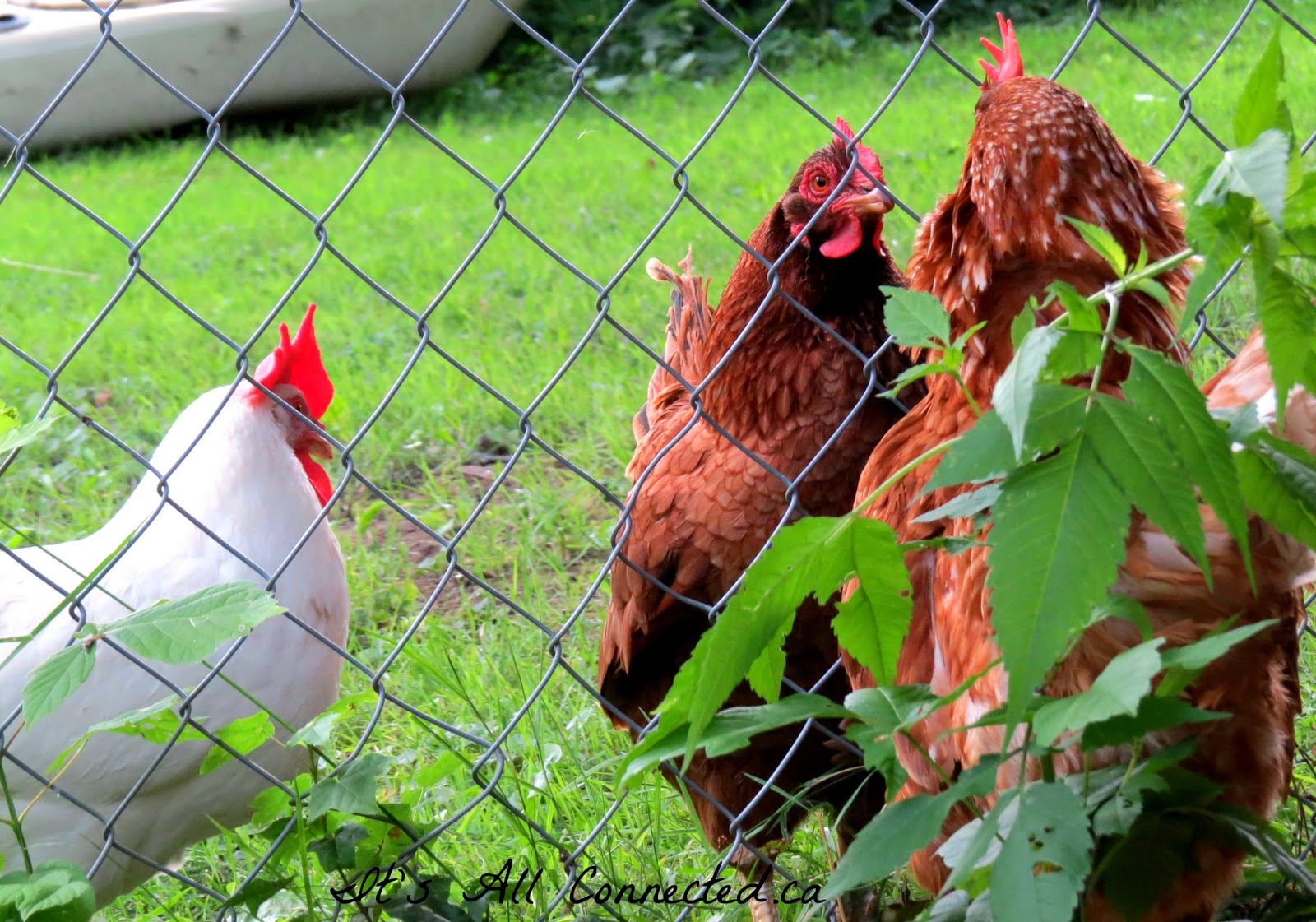 I don't think my two coddled girls are going to win the fight with the gals from the big barn!
Posted by Maureen Wyatt at 23:51